The weather was beautiful, the warmest and prettiest day of spring. I wanted so badly to head out to the garden and plant beans, but I'm still trying to follow the Farmers Almanac Moon Planting Calendar, and today was a "Poor Planting Day. Break Ground Or Cultivate " day. Not that I necessarily believe it, but I set that as a goal and I'm determined to follow through with it.

With breaking ground and cultivating in mind, I decided to do a few simple garden chores in preparation for planting day on Friday. I had decided earlier to put four indeterminate tomatoes in the same bed where I grew seven (eight, but one disappeared) last year. This year, rather than plant them right in the ground, I decided to utilize the 5-gallon buckets left over from last years failed self-watering-container experiment. I'd had very good luck planting tomatoes in (nearly) bottomless buckets, just not the self watering ones. The swc tomatoes became root bound and died before giving me a crop. The tomatoes planted in the (nearly) bottomless buckets grew strong and tall, and were bearing quite well when a windstorm toppled two of them over. Those plants didn't survive the uprooting. Lesson learned, provide windproof staking in the future! By planting this new crop in the buckets, the plants would be up high enough from the ground to plant a nice wide row of bush beans along the edge of the bed.

I rounded up the four buckets, and had Mr. H enlarge the holes in the bottom. Then I scrubbed them with a strong bleach solution, and let them soak for several minutes before rinsing them well. I marked their positions in the garden bed, then dug out a bit of the soil so they sat about three inches in the ground. I filled each bucket about half full of good compost, then added a bit of slow release 10-10-10 fertilizer, 1/4 cup of crushed eggshell and a couple of crushed aspirin, then a shovel full of potting mix and compost that had been blended together. The idea was to finish filling the buckets at tomato planting time.

The next chore was to insert one of the large tomato cages in each bucket, making sure they were inserted into the small holes I'd drilled in the bottom of each bucket. But......I had added the compost! I couldn't see the holes! DUH. I grabbed the end bucket, and carefully slid it out of the hole and across the bed, and dumped it into a waiting un-bottomless bucket. I put the empty bucket back in the hole, and inserted the prongs of the tomato cage into the three holes. I pushed down on it, and it slid right into place. Almost. One prong hit a root and wouldn't budge any further, even though it had a good three inches to go to match up with the other two. I turned the bucket a few inches and tried again. And again. And again. To no avail. The tomato bed sits on the site of the former maple tree, the one that blew down in '08 and gave me the sunny spot for my garden. The tree is long gone, but the huge old roots remain, and they were about to become my nemesis.

I finally got bucket number one and its cage positioned almost to my satisfaction, at least the best I could do with the root problem. I poured the compost mixture back into that bucket, and proceeded to empty bucket number two. With cage inserted, I pushed it into position. It, of course, also hit a root with one prong. I tried cutting off a prong with wire cutters, but I couldn't even scratch the surface of that heavy wire. By now I was cursing and sweating, and wishing Mr. H would wake up from his nap 'cause I was needing help! I pulled the last two buckets and emptied them, inserted their cages, hit roots, gave up. I was getting nowhere fast. In fact, I was going backwards, and time was wasting! 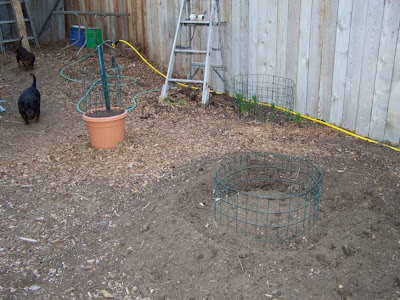 We had dumped almost a half yard of compost where my winter squash bed was supposed to go, so I began filling 5-gallon buckets with as much as I could get in them, then formed the remainder into a nice squash bed, with a hill in the center and a trough around the outside for water. I cut a piece of fencing and formed a 1' high ring to place in the center to keep the dogs from using the area to sun themselves. It's all ready for planting a nice hill of butternut squash on Friday. I used some of the compost to fill a large flower pot, which will be filled with cosmos. I then formed an 18' high ring of fencing to hold those flowers and hopefully keep them from drooping out of the pot. The next ring of fencing was made to do the same for the bed of lilies. All the fencing is green, so should visually disappear among foliage. 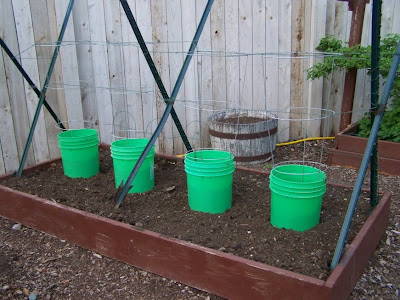 By the time I finished all the fencing rings, Mr. H was awake. We tackled the problem at hand, and finally decided two of the three legs on the tomato cages would have to be bent and rest on the bucket bottom, and the third leg could go through the hole and find a root-less spot for insertion. It worked. The four buckets were all finally in place, their contents replaced, and everything securely wired together.


Otto probably jumped into that tomato bed a half dozen times while I was working there. Each time, he landed on my lettuce seedlings. He'd already managed to nap on one end of the rows of mixed lettuce, killing a 2-foot swath of them, so I wasn't exactly happy with him. I looked around the garden shed and found enough of that folding wire fencing to put along one side of the bed, but I think I'd better buy some more before I plant beans on the opposite side. In the meantime, Annie spent most of the day standing in my future pole bean bed, barking at the puppy next door. I may regret removing the garden fencing from around this north garden.

I've decided to put my dry pole beans in the three whiskey barrels by the back fence. To prepare them, I pounded in large staples around the top edges, and then put a screw hook at the top of the cedar fence. I'll weave garden twine from the barrel to the hook for the beans to climb. One barrel got done, the other two will have to wait until tomorrow, as will preparation of the green pole bean bed. It all needs to be done for Friday's planting day, so let's hope this gorgeous weather holds. 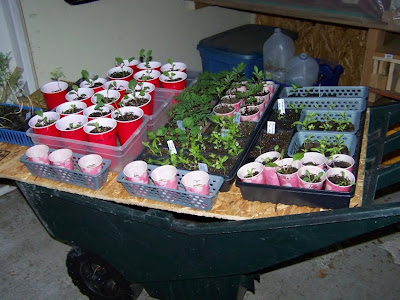 It seems as though I worked awfully hard for the small amount I accomplished! I was exhausted, so took a relaxing bath before fixing dinner. After we ate, it was back outside to move the seedlings in (and take some photos for you) for the night. That's an easy job now. I put a piece of OSB on my garden cart and turned it into a harden cart! I just push it out the shed door in the morning, and pull it back inside at night.

The tomatoes and peppers get carried to a table behind the shed, which is only about ten steps away, a cinch to move in and out. 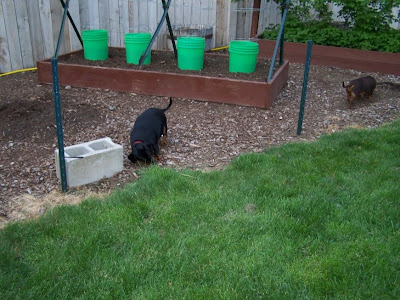 Before we came in for the night, Annie found a worm to roll in, and Otto dug a hole in the pathway, looking for a worm for himself.

All in all, it was a pretty good day.