No harvest for me this past week, although I have been using up as much as I can of last year's canned and frozen foods. We opened the last bag of yellow crookneck squash, ate an entire pint of salsa, added a jar of tomato sauce to the meatloaf, had relish on our burgers. If you had a Monday harvest, be sure to add your link at Daphne's Dandelions.

Even though I have nothing to harvest yet, it has been a busy week. Most of my tomatoes and all of my peppers have now been "up-potted". I probably could have left them in the soil blocks until planting time, but they were getting pretty good root systems. I decided to get them into the 16 ounce plastic cups to give them some wiggle room. 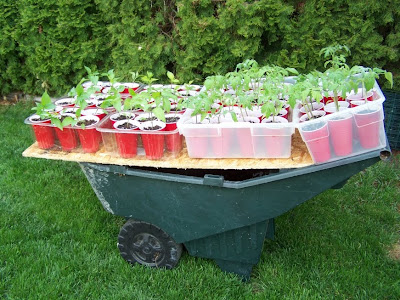 I also transplanted others (mini bell pepper, basil, eggplant and dwarf tomatoes) into containers, along with some flower seedlings (alyssum, tiny marigolds and ?). The "?" seedlings came from the box of "at least 100 pelleted impatiens seeds" that sprouted a total of six plants, five of which I'm sure are NOT impatiens. What a disappointment, as the mixed color impatiens were to be my main flower this year. Well, I planted all six, so we'll see what happens. One looks like a weed, one looks like an impatiens, and four look like alyssum...no, I didn't get the seeds mixed up. 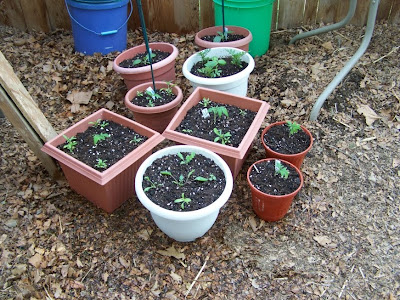 I have seedlings spread all over the back yard. Most of them are being left out day and night now, only the tomatoes, peppers, eggplant and basil get brought in for the evening. 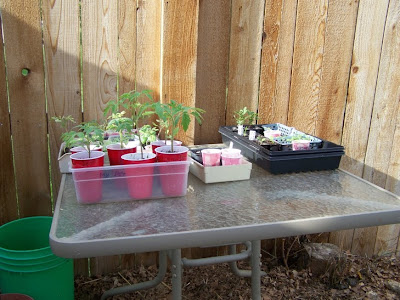 More tomatoes, and odds and ends of seedlings. 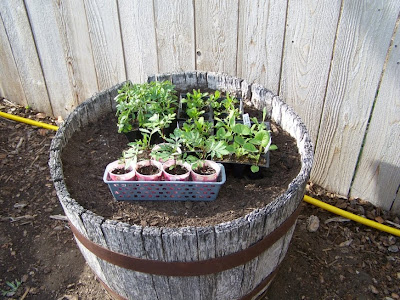 Flowers hardening off in the garden. 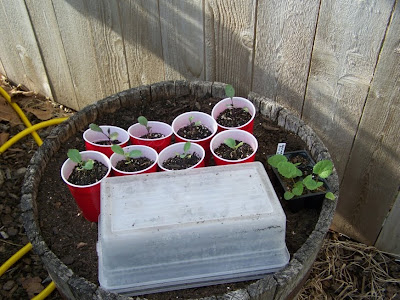 The larger cabbage plants, four Gonzales (mini-cabbages but larger seedlings than the other varieties), were planted yesterday with three marigolds from my saved seed. Today I transplanted all of the broccoli, which gives me a total of six each Calabrese and Waltham, and one De Cicco. The Contender bush beans have been planted along the edge of the indeterminate tomato bed, and pole beans will be planted in the kennel garden tomorrow, weather permitting. I was going to plant dry pole beans in the half-barrels, but changed my mind and planted sweet corn in them. I'll utilize the pea patch for the dry beans, after the peas are harvested. I also prepared a large pot for planting a bush cucumber in the kennel garden, where it can climb on the chain link fencing. I'll probably take a chance on planting it early this year.