Yes, Erin showed me her composter, so I'll show her (and you) mine. 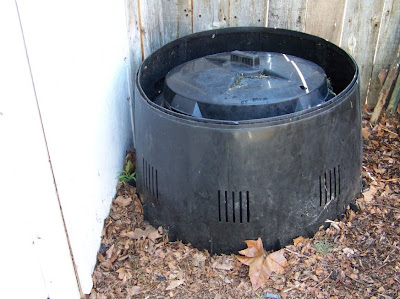 Pitiful, isn't it? I've never hidden the fact that I'm a failure at composting. When we moved to town, and my garden went from about a quarter acre down to maybe 15' x 25', and I no longer had a nice neighbor who raised horses and brought me pickup loads of straw and poop when she cleaned out her stalls, I bought this black monster from the county. They were selling them for something like $5 to get more people interested in composting. So it's had over twenty years of use, and has made exactly one good load of compost for me in all that time. That was last year, when I filled it with chopped leaves from my neighbor's yard mixed with my grass clippings. The top half broke several years ago, so Mr. Granny drilled a few holes on either side of the break and wired it together. It was warped enough that the top and bottom wouldn't fit together, but the lid fit so tightly I had to break it off with a hammer last fall. 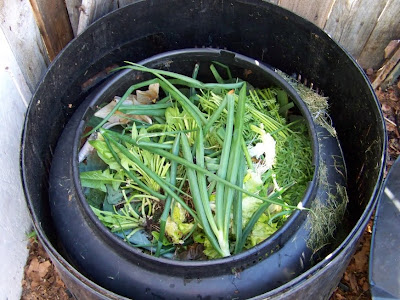 I told Erin I'd thrown the top away, but I lied. Well, I didn't exactly lie, but I forgot. The top is sitting inside the bottom. I think the idea was that I could slip the bottom off of the top, then turn the contents into it. Of course, it may be a while before anything needs turning, as this is the only dry spot in my yard and I've neglected to remove the lid so the rain could saturate the pile. And my hose doesn't reach.
So there ya go, Erin. ;-)

It's a good thing I'm a better gardener than I am a composter. I had just pulled all the bolting spinach and was planting bush beans in its place this morning, when my neighbor's yard man came to the fence and told me I had a very lovely garden. That made my day, so when he left I ran for my camera and went over to Pat's yard to take a new photo from her perspective.

You can click on the photo for a larger version.

While I was at Pat's, she hollered out at me, asking if we'd had a bad windstorm last night. I said no, but we'd had lots of rain, with some thunder and lightning. She said "Look at the tree out back"....so I looked. 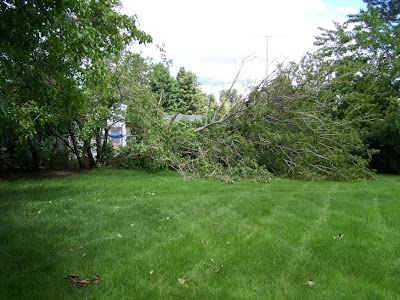 Sure enough, her old mulberry tree was down. 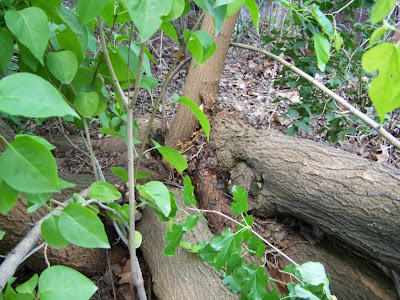 It wasn't the wind, it was the rot. There wasn't a bit of fresh wood showing where it was broken, just old black rot. It's probably a good thing it went down in the night, as her great-grandchildren play back there a lot, and it could have fallen on somebody.

Back in my garden, I checked on the peppers. 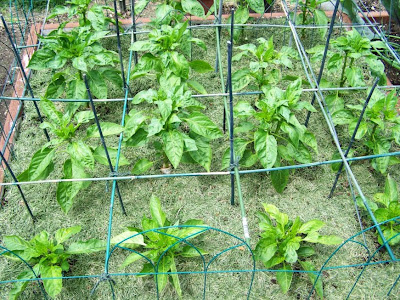 I had given them a bit of fertilizer, then wove a few little bamboo stakes horizontally, for extra support when they get larger. Then I watered them deeply, and put about an inch of grass clippings mulch around them. These raised beds dry out so quickly, you'd never have known we had a rainstorm the previous night.

Then I checked on the snap peas, which have finally begun to bloom. 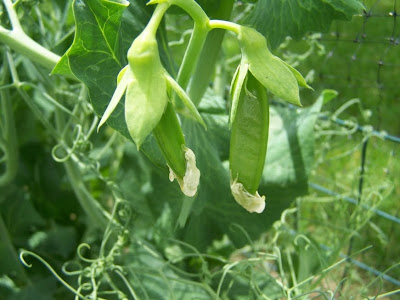 It doesn't look like I'll get a huge harvest of these Sugar Lace peas, the germination was probably just over 50%, but I will get some! This variety bears the pods way up on top of the vine, so they will be easier to see and pick.

Of course, it wouldn't be a trip to the garden if I didn't bring back some more lettuce. I'm trying to harvest one of the rows behind my tomatoes in the north garden, so I can replace it with carrots. 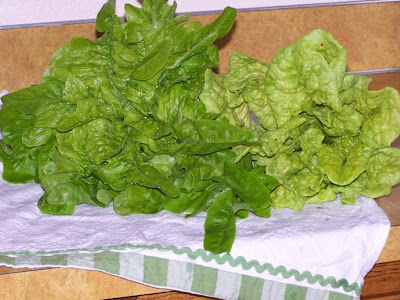 One huge head and one smaller one came out, and made enough room for carrot planting tomorrow. 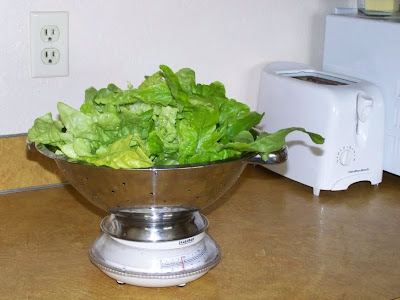 After it was all trimmed, washed and spun dry, I had another 14 ounces of lettuce to put in the refrigerator. But not in the same crisper as...... 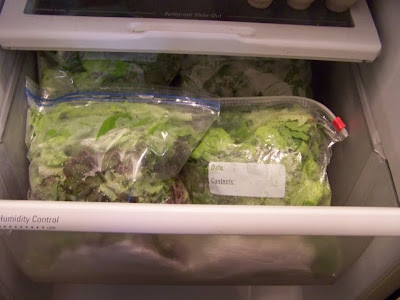 The four one-gallon bags of washed, trimmed and spun dry lettuce that were already jammed in there.

Back out to the garden to find something else for dinner. 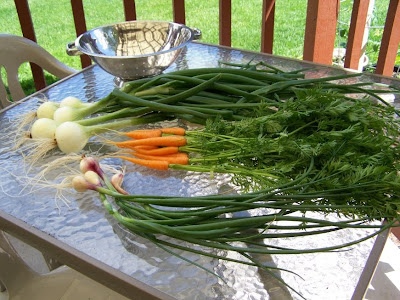 I pulled some of the "small" Walla Walla sweet onions, a few carrots, and the first of the shallots. I didn't think I was going to get shallots this year. When I checked them last March, they looked all mushy and slimy, but I dug them up and moved them to another part of the garden, and they really took off. This bunch was about half of what came from one small bulb, so it looks like I'm going to get a really good harvest from them after all! 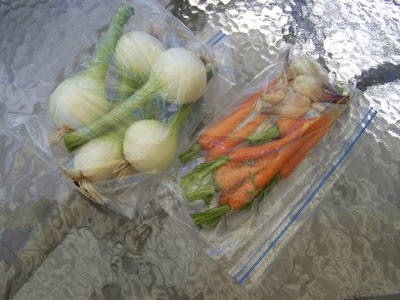 Everything got washed, trimmed, weighed and bagged for tonight's dinner. So what did we do? We went out for 12" Subway sandwiches this afternoon, so we just had a snack (with a large salad) this evening. This harvest will feed us at our next dinner, and I'm salivating for a big pan of sauteed onions.