Whoa, Nellie! When I said the lettuce needed to be cut, I didn't think it would amount to this much! When it's growing under the shade structure, its size isn't so evident. 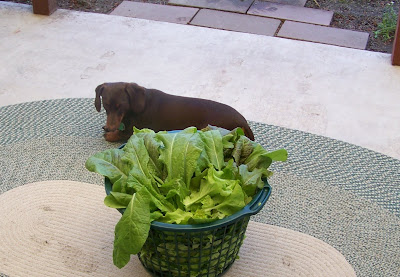 Otto wasn't impressed with that huge basket of green stuff I set down next to him. It was his dinner time, and he was expecting a dish of chicken and green beans, not a basket heaped high with lettuce! Later, as I was at the sink washing it, Annie kept poking my leg with her nose. Poke, poke, poke. She and Otto both do that when they want attention, and Annie does it when she wants food. I told her she wouldn't like lettuce, but she kept right on poking until I gave her a leaf. She likes lettuce. She adores radishes and carrots and green beans, but I wouldn't expect a dog to like lettuce! 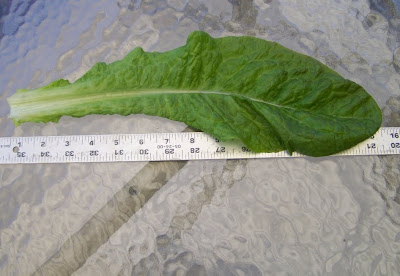 When the lettuce leaves are 16" long, like this Cracoviensis, it doesn't take a lot of them to fill a laundry basket. After it was all washed, I put it into a big clean pillowcase, and Mr. Granny and granddaughter Alicia took turns twirling it around in the air to dry....outside, of course. When they were finished, I weighed it. Four pounds, four ounces of crispy, crunchy goodness. What on earth am I going to do with over four pounds of lettuce? So far, none of it has ended up in the compost, but that day may be near.
So, did we have a big lettuce salad for our dinner? No. We had this..................... 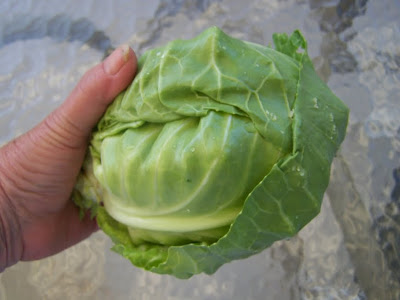 A small, but delicious cabbage, half of which ended up in coleslaw, along with garden onion and carrots. Served with fried chicken, biscuits and gravy, it was mmmmmmmmm-good!

Rant time. The neighbor behind us began watering his garden before I was even out of bed yesterday morning. I try to get the berries picked early, but water from his impulse sprinkler was coming over the fence, all the way to my back lawn, so I couldn't pick the berries without getting soaked. By dusk, with his sprinkler still running, I braved it and got drenched getting the raspberries picked. I didn't even bother with the strawberries, as their foliage was so wet. Around ten last night, I took some things out to the shed, and that sprinkler was still running! I believe in deep watering, but that is just ridiculous. He had that water running for at least 15 hours, and then it rained in the night.