I think I got in over my head today. I started by going out to the garden to dig potatoes, pull beets and pick peppers and basil. Everything was brought in, washed, trimmed, weighed, photographed and refrigerated. Then I started a batch of dough for hamburger buns for tonight's dinner, scrubbed the potatoes and put them, and the eggs, on to cook for potato salad, got the celery cleaned and an onion skinned and ready to dice.

With the dough ready to form into rolls, I decided to go ahead and start a loaf of bread. I bought myself a new bread machine last week, and I'm still playing with recipes. I never used my old machine for baking, as the loaves just didn't turn out the way I liked. So far, two loaves have been made in the new machine, one with so-so and one with good results, so I decided to try a third recipe, and a different setting for today's bread.

While the bread was mixing, and the hamburger buns were rising, I began pulling leaves off the basil, for making pesto to freeze. I decided to make it without cheese (because I didn't have any), and right in the middle of it, Mr. Granny began hinting he'd maybe like some lunch. I stopped the pesto making, and heated up the leftover chicken and noodles from last night's dinner, got him and myself fed, then went back to the pesto. I don't have an ice cube tray, so I dropped it by spoonfuls onto plastic wrap, then put the little packages into the freezer. I began cleaning up the kitchen, and guess what was on the counter....the garlic. I made and froze an entire batch of pesto without the garlic!

That's what happens when you have too much going on at once. Especially me, as I'm not a good multi-tasker. 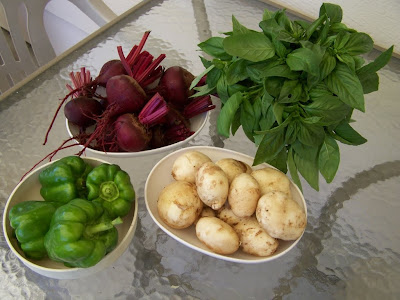 Potatoes were dug, beets were pulled, peppers and basil were picked. 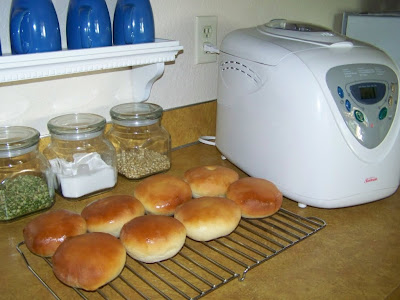 Burger buns were made, and bread was baking in the bread machine. I didn't have any burnt buns this time, because I gave in and bought myself some new air bake cookie sheets! 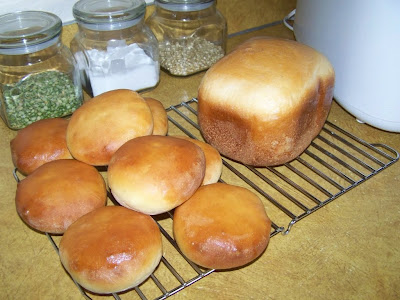 The loaf of bread turned out pretty good, too. So far, I'm quite happy with this inexpensive bread machine (*Sunbeam 5891, $56.95 from Amazon.com, with free shipping). I must say, it's easier and less messy than oven baking. * I guess I'm supposed to state I received no compensation from Sunbeam or Amazon.com for including this information.

I had a bit of a catastrophe out in the garden last night. Do you remember this photo of the tomato plants behind the shed? 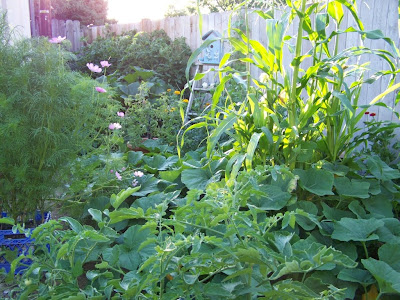 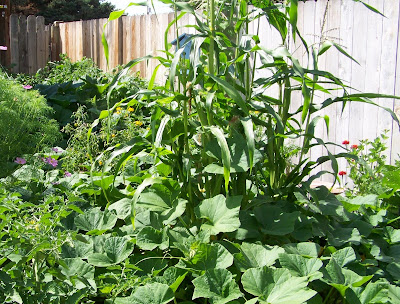 They "shrunk" to about three feet high. They got so heavy, even the clothesline rope I'd tied to hold them up couldn't keep them from collapsing. Unlike the other indeterminates, these plants didn't have the double tomato cages, just one cage each. I really thought the cotton clothesline rope would contain them. Nope. 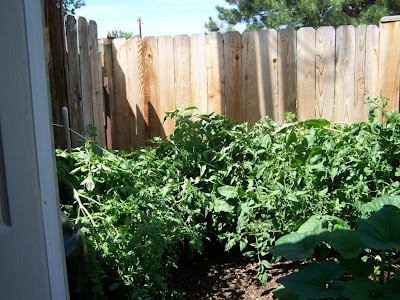 They aren't exactly on the ground, but they're close! It's a real jungle now, and will be difficult picking....or even finding tomatoes as they ripen. 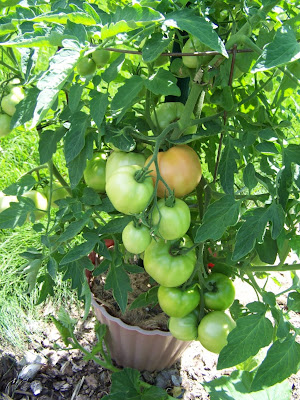 The Clear Pink Early is just about ready to give me her first tomato. 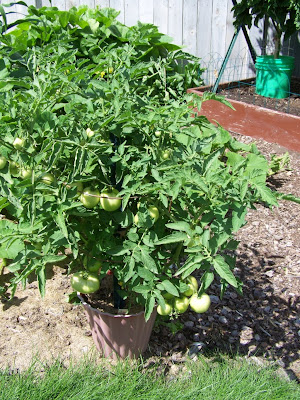 I can't believe the tomatoes this little plant has forming! This is the other side of it. 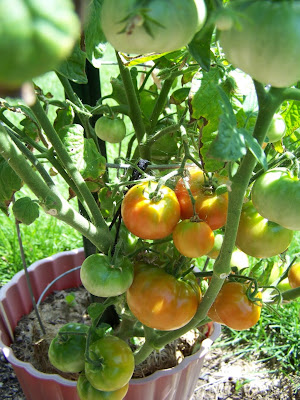 I've picked a few cherry toms, but this Sibirskij Stambovyj (try saying that three times. Heck, try saying it just once!) will give me my first full sized, albeit rather small, tomatoes. Doesn't it figure it's my sickest looking plant? It's all tomatoes, sparse leaves.

Yesterday I picked my first Black Cherry tomato. I wasn't expecting much, as first tomatoes on a vine aren't usually anything to write home about, but oh, my. It was the closest thing I've had to a "real" tomato this year! I also had a Sungold that probably isn't a Sungold, and the flavor was much improved over the first two samples. Not exactly sweet, but it tasted like a tomato. 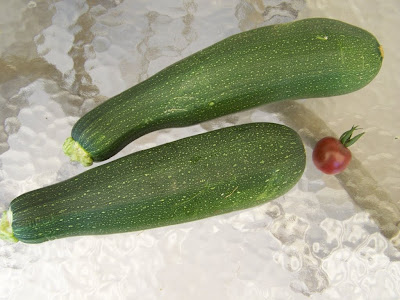