I feel rather badly that I'm ripping out tomato plants, when so many of you are still waiting for yours to ripen.  It has just become necessary to remove some of the plants that are encroaching on more desirable  varieties, or those that are looking sickly and bedraggled from the recent hot temperatures.  I mean, it's not like I really need more tomatoes! 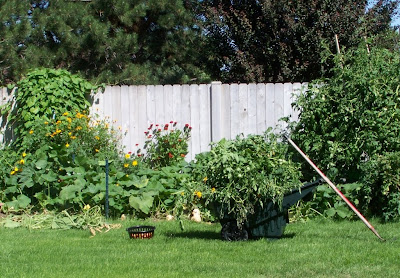 Before I started on the tomatoes, I cut back some of the huge marigolds that were hiding the red zinnias from view, then trimmed the butternut squash vines that were growing out into the lawn. 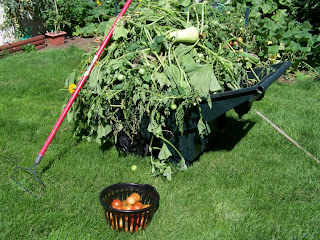 I tried to be really careful but, unfortunately, a couple of lovely little immature butternuts were accidentally pulled with the overgrown vines.  The garden cart is heaped full of marigolds, butternut vines and an entire Nyagous tomato plant.  I did save the nearly ripe tomatoes.
I feel badly about that butternut squash on top of the garden cart.  I've picked two ripe ones so far, and they are running right at 4 pounds each. 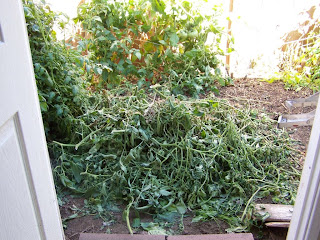 Behind the garden shed, two of the five plants got the axe.  The Brandywine, Eva Purple Ball and Spawn of Angora Super Sweet (aka Velvet Red Cherry) remain, but I think spawn will be the next to go.  It's not super sweet, nor is it very productive.  There are some watering concerns back here, too.  I had installed drip lines to feed all the plants behind the shed, but our irrigation water got contaminated with milfoil, an invasive water plant, and it completely clogged the emitters, making the entire line useless.
This month we had near record breaking temperatures, on both the high and low ranges.  It has gone as high as 104F on the 17th., and a low of 45F last night.  We're expecting to hit 99F once more, this week, then the temperatures should settle down to the high 70s to low 80s, with nights in the low to mid 50s.  Sounds like good garden cleanup weather to me!