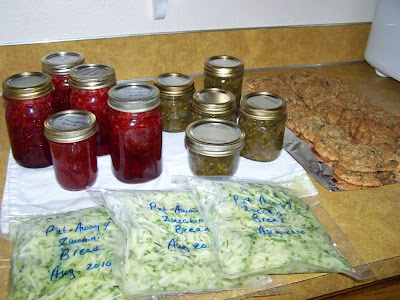 After I cleaned the strawberries I picked last night, I made a batch of strawberry jam. Then I tackled all those veggies that were languishing in my refrigerator. First, I made sweet relish, using up all the cucumbers, red onions and green peppers. I didn't have quite enough cukes, so I used some zucchini, as they are interchangeable in the recipe (see Pat's Zucchini Relish).

Next I shredded and packaged zucchini in oil, to freeze for Kelly's Put Away For Another Day Zucchini Bread. I still had some shredded zucchini left, so I baked up a batch of the zucchini cookies that Momma_S had featured on her blog, Gardening With Care, yesterday. Mine didn't turn out like hers or the original recipe. My cookies almost never turn out like they are supposed to. Oh, they are good, they just aren't soft and puffy, they're chewy and flat. I pooped out after baking half of them, so the dough is in the fridge until tomorrow. Besides, it was already time to start dinner, and there were more veggies in that refrigerator that needed to be used. 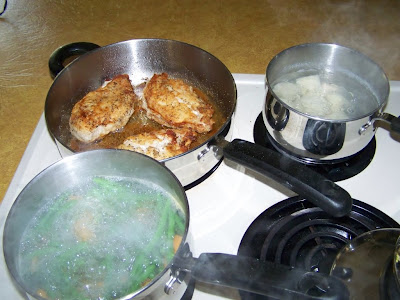 So, with all the zucchini, fresh onions, cucumbers, green peppers and most of the strawberries taken care of, I tackled the green beans, carrots and potatoes. 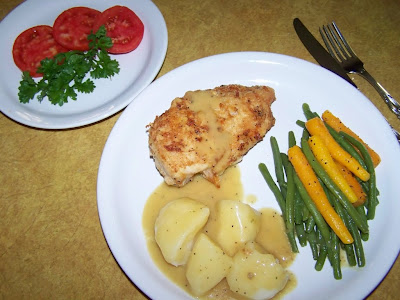 Two of the twelve or so tomatoes were taken from the windowsill, and another was composted when I picked it up and put my finger through its rotten side. It had a crack in it, and had gone bad overnight. The two good ones were sliced and served with a bit of parsley (that I've not found the time to dry just yet). I cooked half of the delicious French green beans, all of the carrots and half of the potatoes. I definitely made a dent in the refrigerator fruits and veggies today! 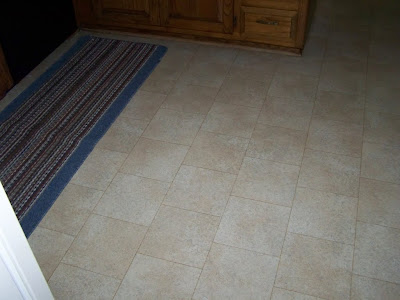 I even mopped the kitchen floor. Erin was terribly afraid I'd get stuck to it, with all the sweet stuff I'd managed to spill today. 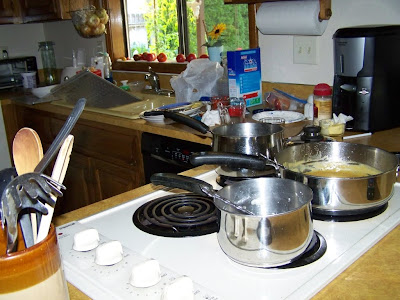 But....now I have THIS. Can anybody mess up a kitchen like I can? *Sigh*

****Yesterday we had a refrigerator challenge. RUN, don't walk, over to Momma_S' place and look at her refrigerator (and comments). I swear, I spewed my lemonade all over my monitor and wet my bloomers, I laughed so hard!