Monday I picked a 21 oz. butternut, the smallest one of the year. I forgot to photograph it before we ate it! 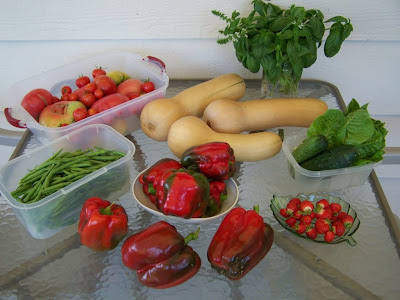 Tuesday was a good harvest day, giving me red bell peppers, a few strawberries, lettuce, cucumbers, tomatoes, basil, butternut squash and the last of the bush beans. The bush bean vines have all been pulled and added to the compost. 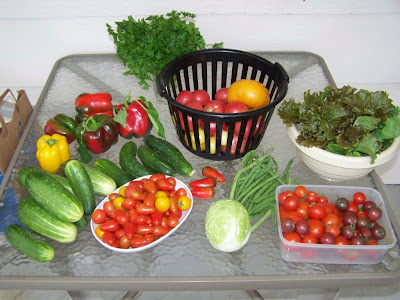 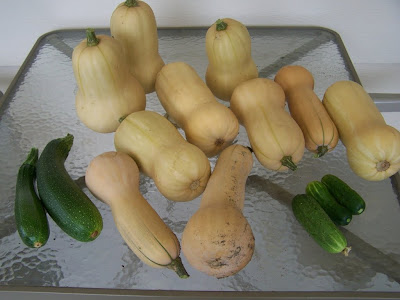 Total for week: 1552 ounces = 97 pounds
Year to date: 794 pounds
Daphne's Dandelions is the host for Harvest Monday, where everyone can share links to their harvest for the week. Please visit her blog and leave a link, so we can enjoy your harvest photos! 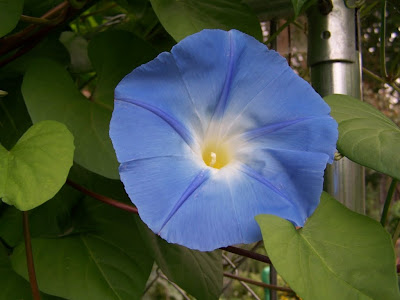 Heavenly Blue morning glory finally gave me its first blossom of the year, a full two months later than last year's first blooms. The vines are loaded with tiny buds, so I'm hoping to have a glorious show of flowers before it freezes.

It's getting closer and closer to time to leave for Arizona, so I'm trying to kick my harvests into high gear, and do some fall garden cleanup in the process. I've pulled many of the tomatoes. I'm down to just five of the full sized indeterminates; 2 Brandywine, 1 Kellogg's Breakfast, 1 Market Miracle and 1 Amish Paste. I've also left 1 Black Cherry and 1 Cherry Roma. There are still a few of the dwarf plants that are refusing to give up. Mini Gold, the first one to bear, looks as though it will be the last to quit bearing! What a work horse that little plant has been, and the foliage is extremely lush and green. The flavor of the tomatoes isn't particularly special, but they sure taste better than store bought, and they are pretty in salads. I will probably plant this one again next year. 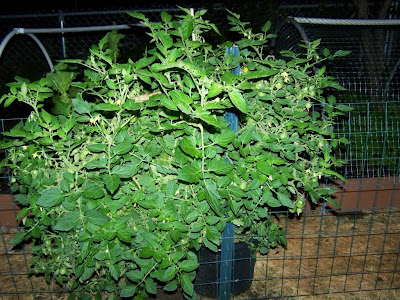 Mini Gold is a tiny work horse. It's only about 2 feet tall, and has been bearing small yellow fruits nearly non-stop since June 24. At first, the tomatoes weren't very flavorful, but became much better later in the season. The plant slowed down for a couple of weeks, while it put forth a new flush of blossoms. It's now giving some ripe fruits, and loaded with green tomatoes and hundreds of flowers. If the roots haven't gone through the bottom of the pot, and if it will survive being moved, I may cut it back before it freezes and try to move it south with us.

I've harvested most of the butternut squash, and cleaned out the vines. There are still four large ones left in the garden, three of which were accidentally pulled with their vines. I've left them there, but I don't know if they will continue to ripen. 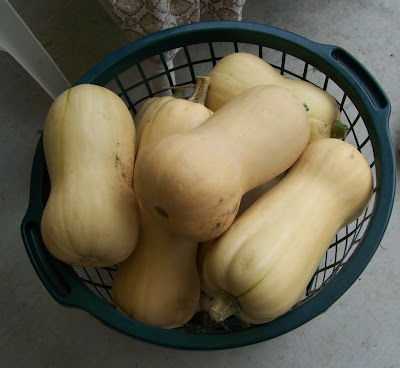 A basket full of butternut squash was harvested from the garden Saturday. 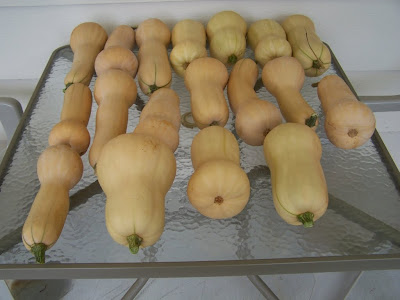 This week's butternut harvest joins all of the others. They have all been scrubbed with a soft brush and water, then given a dip into a sink filled with water and a small amount of bleach. Once they had air dried, they were all placed on the patio table, where they will remain for the next week or two, maybe longer, depending on the weather. They'll be brought inside and stored for the winter. While we are gone for the winter, our thermostat is set at 45F, which should be an excellent storage temperature for them. We have already eaten four, and given away two, so 24 squash have been harvested from two plants, a total of 79-1/4 pounds. If the remaining four ripen, I should get a total yield of about 95 pounds.

Today (Sunday) it rained hard all day, so I decided to do something with all the tomatoes I'd picked this week. When they were all washed and cut up, they completely filled my 8-quart soup kettle. I added an onion and some spices, simmered them until everything was soft enough to puree with the stick blender, put it all through the chinois and returned it to the stove to simmer for three hours. When it had reduced to a fraction of its original amount, I added sugar, vinegar and more spices, cooked it down a bit more, then ladled it into pint jars and put it in the boiling water bath. That was practically an entire day's work for...... 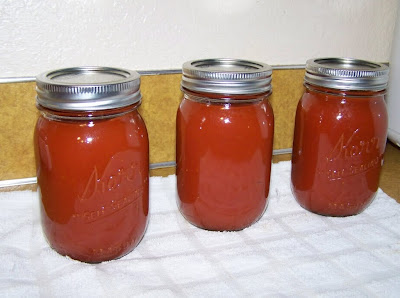