On Monday, we got hungry for home made pizza. I had a lot of fresh cherry tomatoes, basil and garlic, so a "from-scratch" pizza sauce sounded really good. 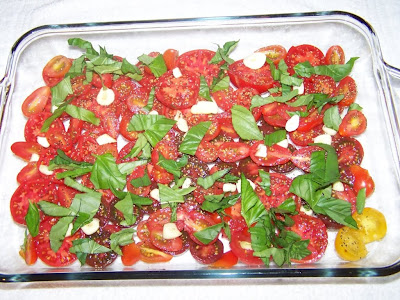 The tomatoes were cut in half and placed in a 9'x13' baking dish. They were topped with lots of sliced garlic, and some freshly picked basil leaves, which were just cut with scissors and scattered over the top. I drizzled on some olive oil, then sprinkled it with salt and freshly cracked pepper and a bit of sugar....oh, maybe a couple of teaspoons. It went into a 325F oven for an hour, then I gave it a good stir and returned it to the oven for another 30 minutes, until the juices had cooked down and the tomatoes were beginning to caramelize.

In the meantime, I decided I might as well take care of several large Brandywines that were getting a bit on the ripe side, so I cored them, cut them in half, squeezed out the seeds and tossed them into a big casserole dish. I added salt, pepper, oil and a sprinkling of sugar to them too, and popped them into the oven with the cherry tomatoes. I left them in the oven for two hours, after which they were still a bit juicy.

The first batch, the cherry tomatoes, went right into the food processor. The larger, juicier tomatoes were poured into a strainer and allowed to drain for a bit. Then they were added to the food processor, and all the tomatoes were pureed together. The puree was then put through the chinois to remove seeds and bits of skin. The texture was perfect for pizza sauce, and oh, my, it tasted sooooo good!

I tossed the ingredients for the pizza crust into the bread machine, and pushed the "dough" button. Then I got some Canadian bacon and pepperoni out of the freezer, cans of pineapple and olives from the pantry, bell peppers and mozarella cheese from the refrigerator.......uh, mozarella cheese. Where is the mozarella cheese? Oh, no! I was out of mozarella cheese, and everything else was ready for making pizza!

Plans often go awry, and this was no exception. I grabbed a couple of frozen Italian sausages, a jar of my home canned tomato sauce, a cube of frozen basil, and a box of whole wheat spaghetti. 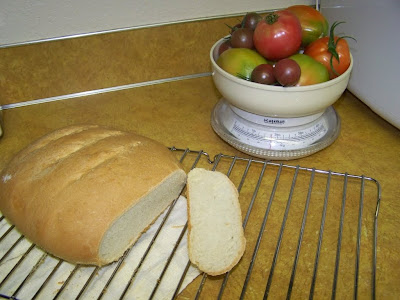 The pizza crust dough was plopped onto a cookie sheet in a big round mass, and put into the oven as an impromptu Italian bread. Everything else went back into the pantry or freezer for another day.

We did finally get our pizza, for dinner last night. It was made with a purchased pizza crust, but the sauce was delightful. I may have spoiled myself against eating any store-bought or delivery pizzas ever again.

Oh, dare I mention I got my hand a bit close to the oven burner when I was removing the pizza? And I couldn't figure out why it kept feeling hotter and hotter as I moved toward the counter? Duh....the pot holder was on fire! 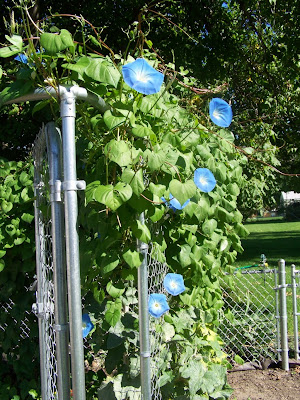 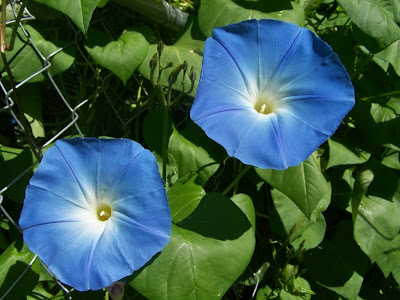 The blossoms are nearly 4" across. 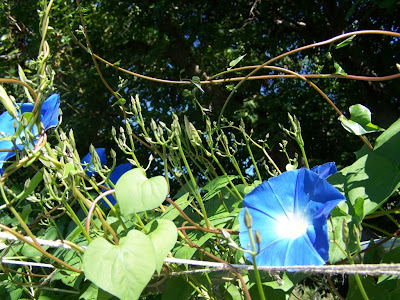 Hundreds and hundreds of flower buds give me the hope that the vines will soon be nearly obscured by the lovely blue blossoms. 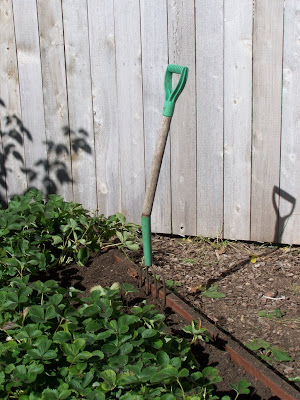 Awwww. I broke my garden fork this morning. 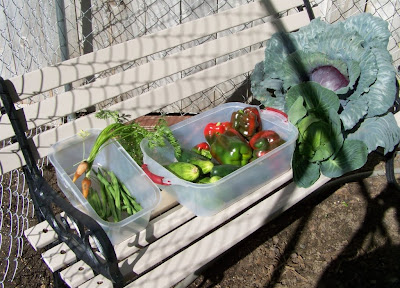 A bench full of veggies, including the last two cabbages. I had to check the fall carrots for size. They have just two more weeks to bulk up, then I'll have to decide whether to pull and eat baby ones or leave them and hope they overwinter.
********

A while back, Mr. Granny and I had to go to Walla Walla to the VA hospital to find out what had happened to one of his prescriptions. While we were waiting, I happened to notice this.... 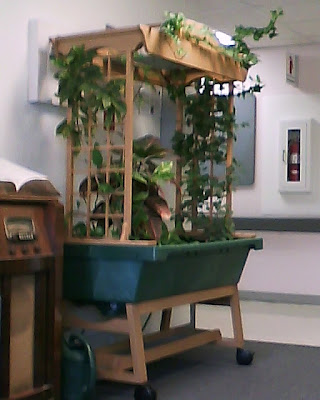 Would this make a cool indoor winter garden or what? I can just see pole beans growing up the side trellises, lettuce, radishes and carrots growing in the tub! It has a couple of grow lights up on top, and it could be wheeled outside on nice days, back inside when it gets too cold!

No, I'm not going to build one. But we did just give away a car top fiberglass pod that would have made two of these very easily! I could kick myself for getting rid of it. I could have used half of it on a pair of saw horses, for a really nice salad garden. Outside, of course.