After I picked all the rest of the cranberry beans yesterday, I sorted through the pods and shelled all of the dry ones to either cook later this winter or use for seed next year. I had planned on just letting the hanging basket full of the large pods that hadn't yet dried hang in the kitchen through the winter while we are gone, hoping they would dry. I had second thoughts about returning to a moldy mess hanging from my kitchen ceiling, so decided I would go ahead and shell the beans and cook them for dinner. 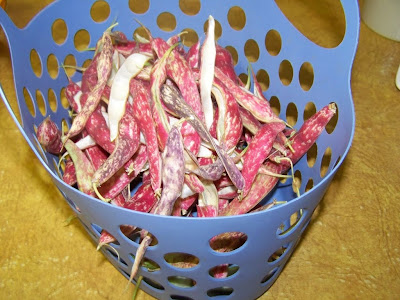 This basket of pods is larger than it looks in the picture! 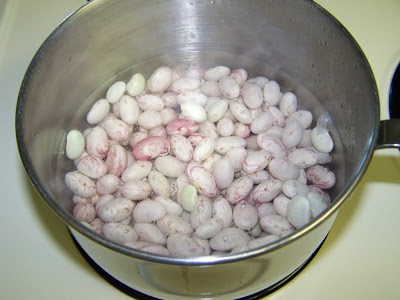 I put the shelled beans into a sauce pot, just barely covered them with cold water and added some salt. I brought them to a boil, put on a lid and lowered the heat to a simmer. I set the timer for thirty minutes. 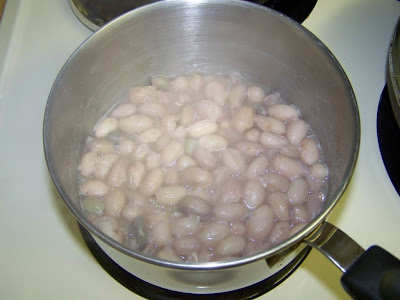 At 25 minutes, the shell beans were tender, and some of them had begun to burst open. 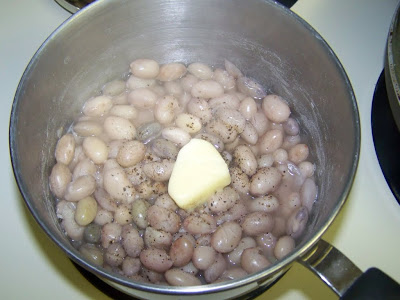 I added a lot of freshly cracked pepper and a big pat of butter. 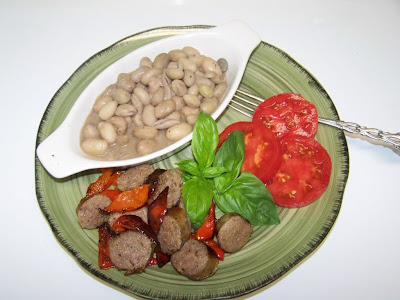 I served the beans as a side dish to grilled Italian sausages with red bell peppers, and fresh sliced Eva Purple Ball tomatoes.

The verdict: The beans were very mealy, much like Lima beans. The flavor was good, but would have been improved with the addition of onion and ham or bacon. I was out of onions, bacon and ham, as we're trying to just eat what is on hand so we don't have to transport any fresh foods south with us. Would I cook them like this again? Maybe. Would I grow cranberry beans just for using as shell beans? No. I'll have to try the dry beans before I make a decision whether or not to save some as seeds for next year.