Yesterday I mentioned I'd like to eliminate the boxes that I have in the garden. As much as I like not having to bend over so far to plant, weed or harvest, I'm finding a few drawbacks in having those solid wood sides around all the beds.

(a) Being situated with one long side (21-feet) facing the hot afternoon sun, it gets too hot and wilts the plants.

(b) The native soil beneath the bed is quite sandy and drains very well, so the raised boxes tend to dry out more quickly and require more water.

(c) The layout is all wrong for utilizing a drip watering system.

(d) It's very restrictive, not allowing me to use much imagination when I plan my garden.

(e) Not having solid sides means I can use the pathways for trench composting, then use those areas for the next years beds.

(f) I'm having problems with sowbugs and odd looking fungi that I never had before wood boxes. 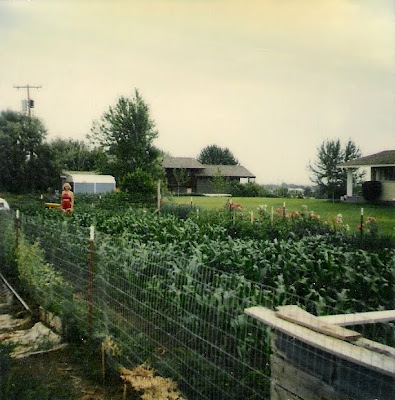 This is the only photo I have of a garden BDC (before digital cameras). This was taken in 1981, before we moved into town. This garden was intensively planted on raised beds. It was planted on a sand dune behind the house, with nothing but composted horse manure and shredded maple tree leaves added to enrich the soil.

We moved to town in November of 1989, so the first garden there was planted in the spring of 1990. I again had a traditional raised bed, intensively planted garden, along the entire west side of the yard. There was only a small metal shed where the larger one now stands, and I used all of the space between the shed and the back fence as well. I haven't found a single photo of the garden from then until it was moved, ten years later.

In the fall of 1999, our neighbors to the west put a dog kennel on their patio, which ran right along the fence line. Every morning, the neighbor would hose dog poop from the kennel to the small space between patio and fence, which drained right into my vegetable garden. We pulled out all the veggies and planted a privacy row of arborvitae along the fence. The following spring, the garden was relocated to the only other sunny spot in the yard, right off the back deck. 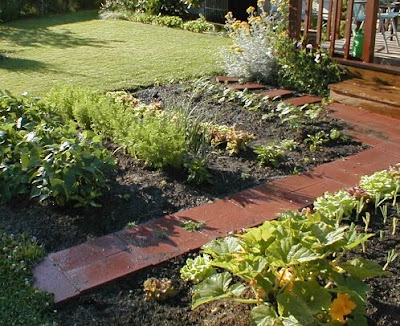 It was a much smaller garden, but I loved the easy access from the kitchen 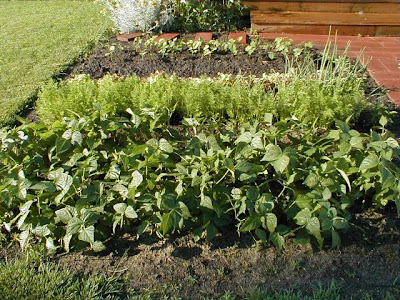 I planted traditional rows, in raised beds that were from 3'-4' wide for the bush beans and peas down to 1'-2' wide for lettuce, carrots, onions, etc. 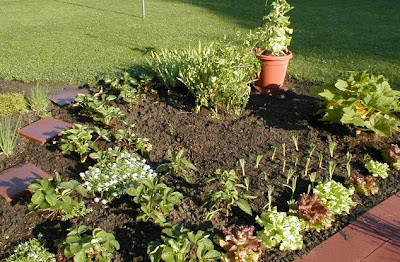 I could get quite random with placement of plants, and it was easy to set pots and planters wherever I had the space. 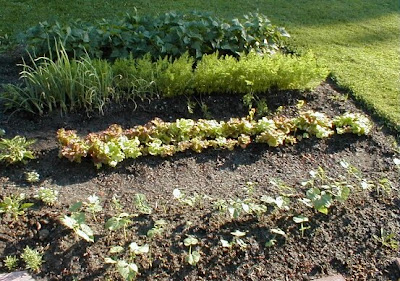 It was small, but productive and easy to maintain. The garden pretty much stayed the same for two years. 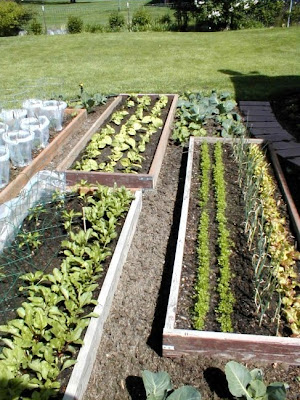 My first foray into boxes came in 2002. I had really good luck with this garden plan, but the boxes ran east and west, and there was no problem with overheating and wilting crops. 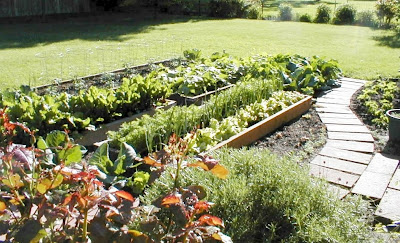 I'd have to say, this was my favorite for a small garden. Not everything was confined to boxes. There was a small bed of strawberries on the right of the walkway, cabbage and broccoli and nasturtiums at the ends of the boxes, alyssum in the front, herbs to the left. We got plenty of tomatoes from the entire row of patio type tomatoes in the back box.

That garden remained for three seasons. In the winter of 2004, I had extensive and debilitating (for me) cancer surgery, so the boxes were removed from the garden, and the garden was seeded in grass. It wasn't until 2008 that my body finally recuperated to the point where I felt strong enough to once more tackle a garden, so I started off small. I planted a 3' wide strip along the fence between us and the neighbor to the east. That was the summer our maple tree went down in a strong wind, and gave me an entire back yard of sunshine. I decided to extend the garden by building several 4x4 and 4x8 boxes along the east and north sides, with the unused dog kennel in the corner. 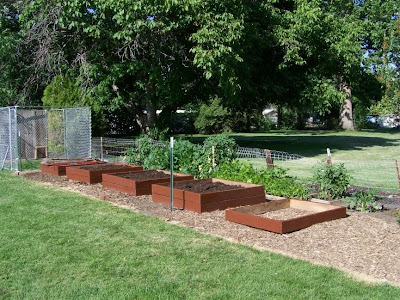 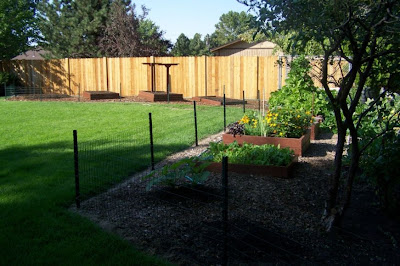 North bed 2008. The north bed will remain the same, with boxes.

Which brings us back to....(g) I'm bored. I need a big project on which to work.