I just pulled out all of my turnips and threw them in the compost. Why? Because the soil in my garden is infested with wireworms. If you don't know what wireworms are, be glad.....be very, very glad.

Wireworms are the larvae of the Click beetle. They are slender, elongate, cylindrical or somewhat flattened, and relatively hard-shelled for larvae—bearing resemblance to common mealworms. Although some species complete their development in one year, wireworms usually spend three or four years in the soil, feeding on decaying vegetation and the roots of plants, and often causing damage to agricultural crops such as potato, strawberry, corn, and wheat. The subterranean habits of wireworms, their ability to quickly locate food by following carbon dioxide gradients produced by plant material in the soil, and their remarkable ability to recover from illness induced by insecticide exposure (sometimes after many months), make it hard to exterminate them once they have begun to attack a crop. Wireworms can pass easily through the soil on account of their shape and their propensity for following pre-existing burrows, and can travel from plant to plant, thus injuring the roots of multiple plants within a short time.

I have always had a wireworm infestation at this property. They are often problematic in gardens where sod has recently been removed. It's all but impossible to get rid of them, now that the strong insecticides of years past have been banned for the home garden.

In my garden, the crops that seem to suffer the most damage are radishes and turnips. Occasionally I'll find some minor damage to carrots and potatoes, but so far it hasn't been severe. I have lost a few plants (one broccoli and several lettuce plants) that I suspect had their roots consumed by wireworms. As the plants began wilting, I pulled them and checked the roots. They were almost nonexistent, and there were wireworms in the surrounding soil. 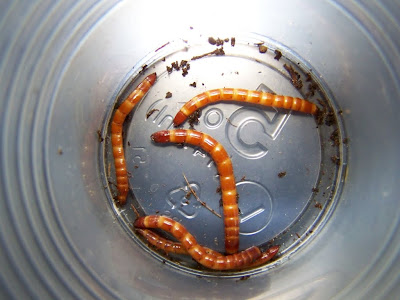 These wireworms were all found in a cluster in the soil after pulling just one small turnip. They are about one inch in length and very hard, which is probably why they are called "wire" worms. 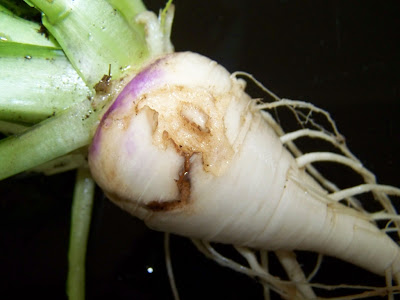 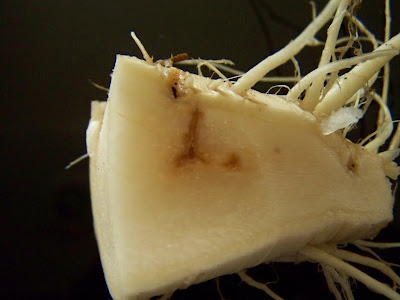 The damage goes deep. Every turnip I checked had major damage, leaving them inedible.