The Weather Channel says it's 96F here....it lies.  Our digital outdoor thermometer, hanging in the shade of the patio, says it's 98.7.  I took it out and hung it on the clothesline, in the sun, not touching any metal, and it's registering 110.3 right now.  This isn't even our hottest part of the day!  I went out to the garden about six times to pick stuff, as I could only stand being out there for a few minutes at a time.  I picked half of the beans last night, but the other half really has to be picked tonight.  It will just be hotter if I wait until tomorrow.  I might have to take a flashlight out and pick after dark! 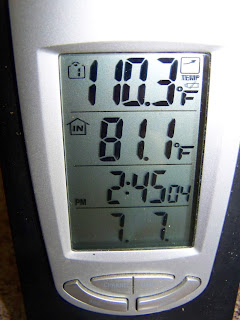 Yes, I just gave in and turned the air conditioning on.

The GOOD news is, now that many of you have been taunting me with your strawberry harvests, mine has finally begun! 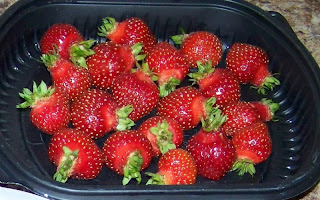 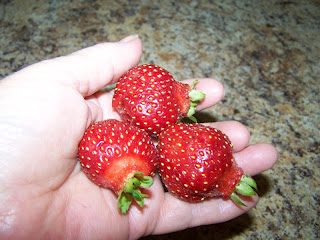 They are the biggest berries this variety has ever given me!  It looks like this might be my best strawberry season yet.

Some of us have been having a conversation about whether too much watering makes our tomatoes taste bland.  I am an over-waterer, and always have been.  I listen to those who brag about their delicious varieties, then I grow them, and they are just average tasting.  Mine are never super sweet or super anything, they are just.....well, just good, not great.  Now it turns out those in areas hit by heat and drought, who haven't had the means to give their gardens much water, are growing super good tasting tomatoes!  I did a little taste test on my own this morning.  I have three identical Minigold tomato plants in identical black pots.  Minigold #1 is on the patio, and only gets watered when I notice it is quite severely wilted.  Minigold #2 is in the garden and it gets watered on odd days, by the lawn sprinklers.  Minigold #3 is in another area of the garden that gets sprinkled on odd days by the lawn sprinklers, and on even days it is also hit by by the garden sprinkler, so it gets double the amount of water.  Taste test results:  Minigold #1 was sweet and juicy, and had the largest tomatoes.  Minigold #2 was a bit sour, but juicy, and the fruits were slightly smaller.  Minigold #3 was sour, mealy and the fruits were the smallest.  So there is another reason to not over water the garden.