The beets I planted July 18th are finally large enough to harvest. I had pulled a few for dinner the other night, but I need to begin picking the bush beans in this garden so I decided to get the remainder of the beets out of the way. I left three or four very small ones, for greens for my rabbit. I had only planted two very short rows, so there weren't enough to bother canning or freezing. I decided they were perfect for pickled beets, and a half recipe was just the right amount for one quart jar full. For many of my garden veggie recipes, I count on those found in my old (1972) Farm Journal's Country Cookbook. This one, for pickled beets, is one of my favorites:

Remove beet tops, leaving root and 1" of the stem. Cover with boiling water; cook until tender. Drain, reserving 1 cup liquid. Remove skins and slice beets (I quartered the small beets, rather than slicing them).

I then poured it all into a clean quart jar, and it's sitting on my counter until cool enough to refrigerate. The aroma is delightful!

If you want to can them, ladle the hot beets, onions and liquid into hot pint-sized jars, leaving 1/2" air space . Adjust the lids and process in a boiling water bath for 10 minutes.

Today in the garden the July planted bush beans are beginning to bear. I got a small picking, enough to mix with some crookneck squash, for dinner. They are blooming profusely, and have lots of small beans that will be ready for picking real soon. The crooknecks have done a complete turnaround, after slowing down for the past two or three weeks. I gave my neighbor several little ones yesterday, and picked another half dozen for myself today. The zucchini are still slow to mature now, I have picked only two this week. It looks as though a few of the carrots in that bed might reach eating size by the end of the month. I wish now that I had planted more, but I didn't think there was any chance they would have reached edible size. No regular tomatoes today, probably a half dozen for the week, but a lot of green-turning-to-yellow, nice sized ones on the vines. One red bell is half red, half dark green. I've had to put bird netting over the spinach bed, as the birds are eating it as fast as it grows. It looks as though I'll be able to pick a few leaves for salad by next week. I've also discovered several heads of romaine in the rabbit's greens bed! I'll be taking those for myself, thank you.

I have just about finished the new gardens. They are all built, painted and filled, and part of the raspberry support system has been attached, just two low cross arms left to screw onto the posts. The bark mulch has been spread over all of the garden paths, and the one open section of fence filled in with chicken wire. I ran out of the green fencing about 5' short, and really don't want to buy 50' for that one section! Next year there will be a bed of sunflowers in that corner, so it shouldn't even show. It had to be secure though, as the puppies delight in taking cow pies out of the compost and bringing them in through their pet door! It's not good finding chewed up cow pies in your bed. YUK! 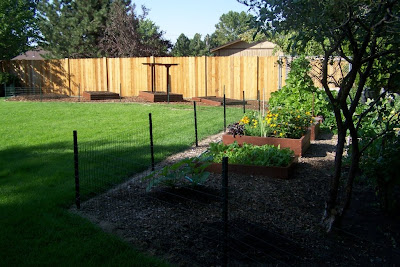 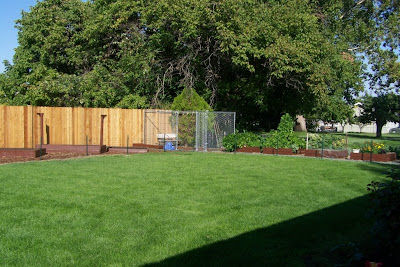 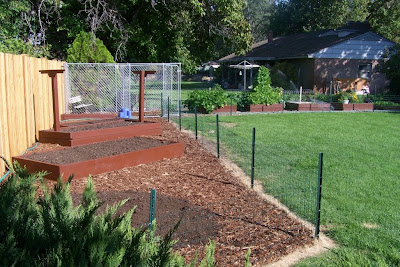 There will be plenty of room for a few containers in the new garden area, both up against the cedar fence, and also by the little wire fence along the front. My next project, though, will be a pretty little birdhouse for the top of one of the raspberry bed posts.