I've been so busy the past few days, I haven't even found time to blog! It's my new hobby. At least it has a chance of becoming a hobby, something to keep me occupied for the winter. I decided to build a birdhouse for my garden.

I found a simple pattern on line at Bird's Birdhouse Free Plans, then set off for Lowe's to buy lumber for my project. I had decided I wanted a larger birdhouse than what was shown, so I ended up buying white pine boards in four-foot lengths and 6", 8" and 10" widths, along with a dowel for the little perch. Back home, and using the pattern as a general guide, I found I had enough wood for two birdhouses. I decided I'd make one a "normal" height, and another a bit taller. The shorter one could be mounted to the front pole in the soon-to-be new raspberry bed, and the taller could sit atop one of the colorful ladders I plan to use as trellises in next year's melon bed.

Out to the garage, with all the boards marked for cutting, it was a simple job on my electric miter saw. Yes, some old ladies actually own a good electric tool *g*. Then, on the kitchen counter, all pieces were glued with exterior wood glue, then nailed with my Arrow ET200 Nailmaster 2. Yes, some old ladies actually own more than one good electric tool *g*. 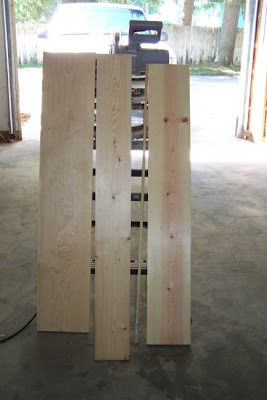 Well, let me tell you it was fun building those birdhouses! I think I got a bit carried away with the sizes, but the neighborhood crows will have some pretty nice digs! 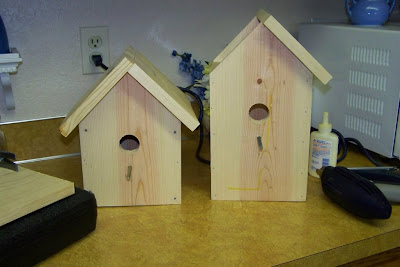 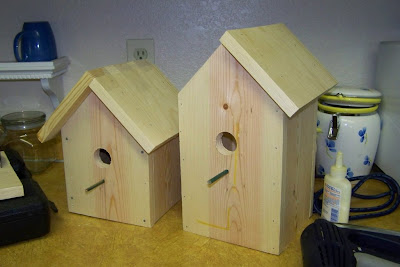 One side of the roof was left unattached, as it will be hinged for easy cleanout if birds actually decide to reside in there. I taped one on for the picture, so you could see what it will look like.

Now it was time to paint them. I decided in advance to do bright colors to match the blue pot that's already in the garden, and the three brightly colored ladders that will join it next spring. Sunflowers were my first choice, as there will be a few of those in next year's garden, also.

Paint. Exterior color, no problem. Off to Wal*Mart for some large bottles of liquid acrylics for the houses, and a can of blue spray paint for the roofs. Brushes and decorative paints....that's a bit of a problem, as I left all my painting supplies in Arizona last spring. Oh well, they're just birdhouses, so some cheap brushes and a box of those little tubes of acrylics (cheap) should be good enough. Back home, I'm ready to tackle the project again. Uh-oh, forgot the Kilz, and the bare wood needs a primer-sealer. Back to Wal*Mart (do you see a pattern developing here?) Back home, birdhouses are all primed and sanded, and the roofs are spray painted a pretty blue. My grass is painted a pretty blue, too. HA! I always wanted a "bluegrass" lawn! But I digress.

The small birdhouse goes well, it's primed and sanded and painted a nice off-white and ready for the decorative painting. I have decided by now that this one will not take well to the sunflowers I'd planned, but would look nice with blue morning glories and a hummingbird on the front. Out come the cheap paints and the cheap brushes, and a couple of hours of beating myself over the head trying to paint that ^&%$*#% birdhouse. FORGET CHEAP PAINT AND BRUSHES! Off I go to Michael's to purchase some decent brushes and paints. In fact, it was $97.87 worth. I think I'm now into those two birdhouses for about $150.

Maybe it's not such a great winter hobby after all.

Today in the garden: The bush beans are really beginning to produce, so I picked a colander half full today. The tomatoes, which had been ripening very slowly and giving me some small, deformed fruit, have now perked up and are producing decent sized tomatoes again. The sickly summer squash vines both have sections of lush new growth, with lots of blossoms and new squash forming. I'm getting so many cherry tomatoes now that I'm using them for cooking, in sauces. A heaping bowlful a day is too many for eating fresh. The cucumbers are much smaller now, and Mr. H has asked me to pick them that size as he said the last large one was a bit bitter. I'm getting baby spinach from the seeds I planted less than a month ago, and the mesclun bed is still growing enough to feed a family of rabbits. It's too bad we don't care for those greens. Anyway, I got over 6-1/2 pounds from the garden this morning! 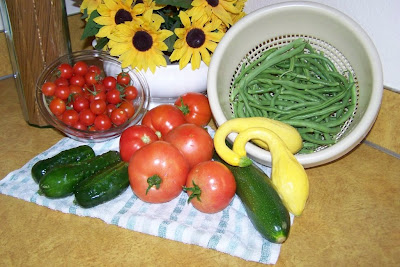