Today we drove to Blythe, CA, looking for a Meyer Lemon tree. It's all Thomas' fault. He just had to blog about how to Grow Your Own Citrus, Meyer Lemons. There were a few other things I wanted to pick up at Blythe's Ace Hardware, so I can't blame the entire trip on Thomas. The lemon tree, however, was all that was on Mr. H's mind. I've told the sad tale here before, but it bears repeating.

When we first bought this old place, in the spring of 2004, it had a very pretty oleander hedge, three palo verde trees and two mesquite trees that had been mercilessly mutilated by a former owner, and the lovely palm tree out front. That's the extent of it, as all the rest of the property is natural desert. Well, my next door neighbor decided to replace a small lemon tree on her property with a grapefruit tree, so she dug out the lemon tree and tossed it into the brush pile to be taken to the land fill. I happened to see it there, and rescued the poor thing. It had begun to wilt a bit, but I got it into a bucket of water, then found the perfect spot for it in the front (soon to be) cactus bed. That was in April, and we stayed here until the end of June, painting and renovating to make the place livable and comfortable for the following winter. When we left, I paid a neighbor man to keep everything watered. He did a really good job on the oleanders and the palm tree, and he over watered all the cacti, but the poor little lemon tree didn't survive the summer. Neither did the $75 worth of cacti I had purchased and planted....he drowned the poor things. 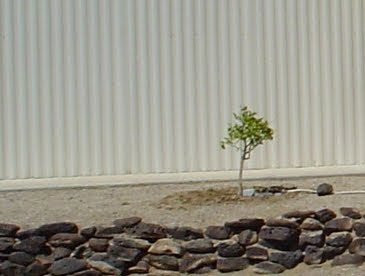 The first lemon tree, rescued from the brush pile.
Early in October of 2005, we drove down from Washington to spend the winter. When we arrived, there was a brand new little Meyer lemon tree planted in the garden, a gift from another neighbor. We babied that little tree all winter, and when we left in the spring it had some lovely scented blossoms on it. Again, we hired the neighbor to do our watering, and stressed the necessity to keep the lemon tree watered....and to go very lightly on the water for the second batch of cacti that were thriving when we left. Again, when we arrived in the fall of 2006, most of the cacti and the Meyer lemon had expired. I cannot find a photo of it, I think I was to upset to take a picture.

Undaunted (or can one be just slightly daunted?), I decided to give it just one more try. This time, I fired my water boy, put in underground irrigation lines with bubblers and drip lines, and purchased a timer that could be set for two zones...cactus and oleanders/trees! When we left for Washington, the end of March 2007, the lemon tree looked like this (click to enlarge)..... 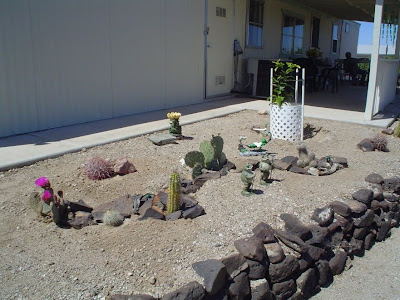 The cacti flourished, the oleanders were prettier than ever, the palm tree grew bigger and stronger. But the lemon tree died. 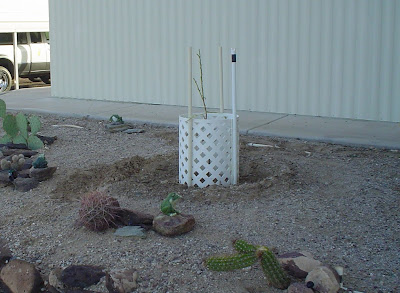 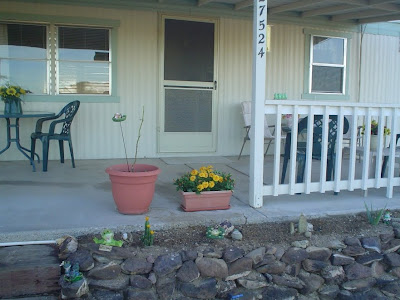 It still had some greenish stem, so I bought some good (expen$ive) potting mix and moved it into a large pot. This is what it looked like on November 14th. 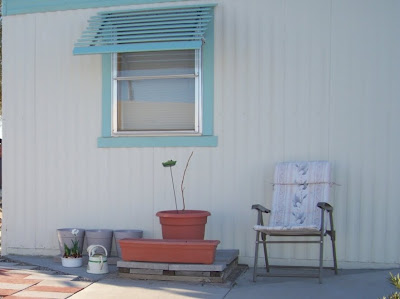 Not one to easily give up, by February of 2008, I had moved it to a sunnier spot on the south side of the mobile home. 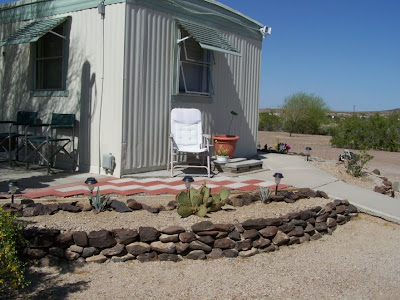 By the end of March, I gave up on the lemon tree. All I had left was an empty pot, with a funny little frog on a stick poking out of it. 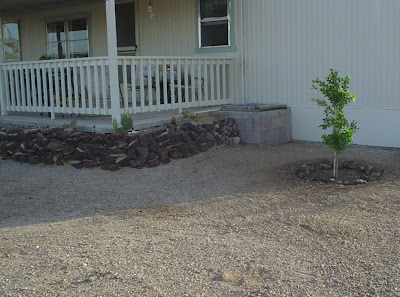 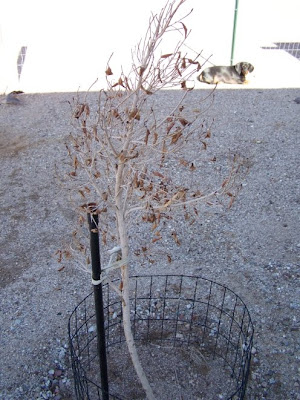 Back to our trip to Blythe for the Meyer lemon tree...no, we weren't successful in finding what we wanted. I guess we are looking for a dwarf Meyer lemon. The ones we found were 5-6 feet tall, and we want one that can live in a pot and travel back and forth, from AZ to WA, each year. No way could we transport a 6-foot tall tree! And you know what? With our luck at growing trees down here, maybe it's just as well we didn't find one.