*Each week Daphne's Dandelions hosts Monday Harvest. Be sure to visit her blog to see who is harvesting what this week!*

I have nothing to show.

That doesn't mean I didn't have a harvest. It just means I set the pots of lettuce right next to the rabbit's cage, and we've been picking his dinner and feeding him each night, rather than picking the greens and keeping them refrigerated. He does seem to like these ultra-fresh greens even better. I'm actually not growing enough to keep him satisfied yet, and we had to make a trip to the grocery store for some red leaf lettuce to supplement the home grown. 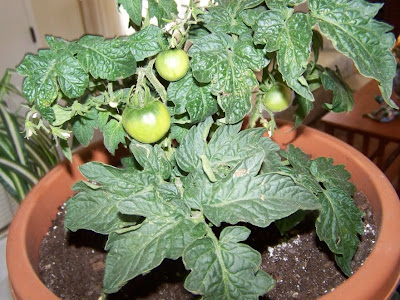 Elsewhere in the mini-garden, the tomato plants are still alive. The tomato-less one still has no blossoms, but the larger plant is blooming and setting fruit just fine. 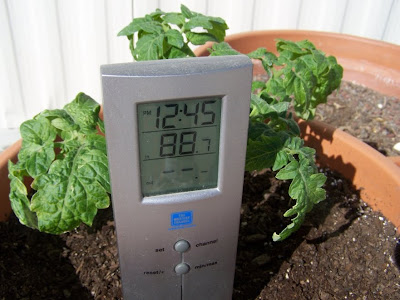 When the tomato plants go outside, they are on the south side of the building. I have to watch the temperature here, as it can get very hot, very fast. A few minutes after I took this photo, the temperature had gone up to over 91F. It's sheltered from the north wind and gets sun all day long. On warmer days, I'll be moving them around the corner where it doesn't get quite so hot. 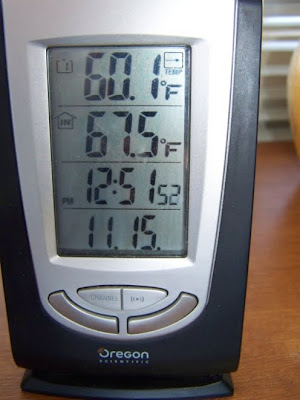 Yesterday I placed the two plastic containers in their spots in the garden, and mixed equal parts of compost and native soil with vermiculite and a bit of slow release fertilizer, then filled the small box. I wanted to use just compost and vermiculite, but I'm already into quite an expense in purchasing it by the bag, so I'm going to see how well things grow with the mixture. If it works, I'll save quite a few $$ next winter. 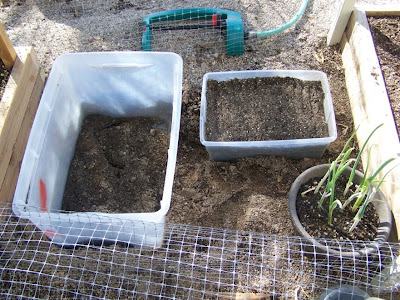 I planted red onion sets in the small, bottomless container, it held 25 sets. I'll pull every other one to use as green onions, and see how big the others will grow in the time we have here in AZ. The small pot holds green onions from the grocery store, it's how I keep mine from going slimy in the refrigerator. These have been potted for about two weeks, the original tops have died back and all new green growth is now showing. The seed mats have been made for the larger plastic box which, when filled, will hold Short 'n Sweet carrots and Melody spinach. 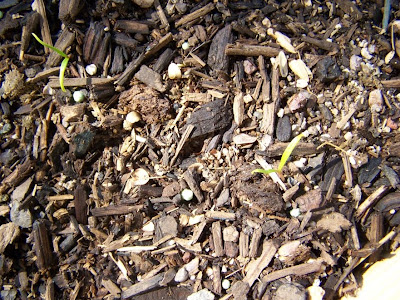 Look closely! The spinach I planted just a week ago is showing! 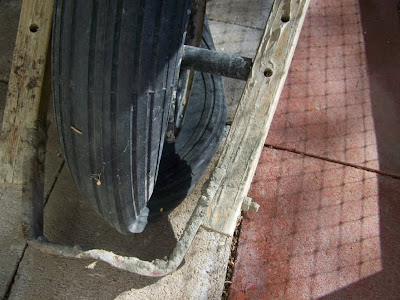 Poor wheelbarrow....I think Mr. H has some fixin' to do. 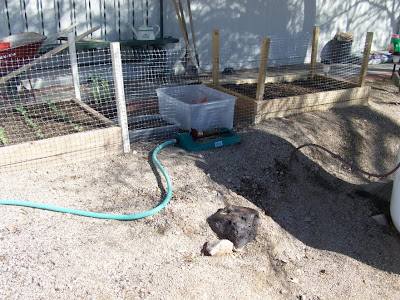 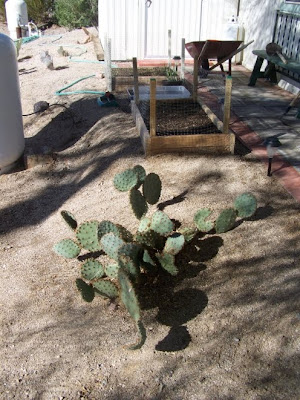 There's quite a drop off on this narrow strip next to the walkway.

The entire area is backfilled with sand, probably from a nearby wash. Once it's been wet and then dries, it's like concrete...as long as nobody disturbs it by walking on it. Over the years, it has become quite unstable. I've tried to talk Mr. H into a retaining wall back here, but to no avail. The rock retaining walls around the rest f the property are holding up well where I reinforced and rebuilt them using concrete, but I'm afraid the old body is wearing out...I've built my last rock wall. I have a bunch of African daisy seeds that I may sow on the bank between the garden and the alley. I'm thinking I might lay down some of that plastic fencing, then scatter the seeds and sift a bit of sand/compost over them. That might possibly be enough to keep people from walking there, and the roots might eventually hold the soil.