I had very good intentions of getting the second square foot garden box built this week, but my only source of "forest products compost" (Wal-Mart), was sold out. I've found this to be a pretty good mix when combined with composted manure, and affordable at under $5 for a 1- 1/2 cubic feet bag. So...yesterday my friend, Esther, and I decided to head for Phoenix to buy some plants, potting mix and spend ourselves silly at Costco. We stopped in Buckeye to check out Wal-Mart's plants, but they only had some really horrid looking Patio tomatoes, way overpriced, and no other varieties that could be grown in containers. Nearby was Lowe's, so we checked on their plants and scored their last two Patio tomatoes. They were lovely, stocky plants with lots of blossoms and some tiny tomatoes already forming, and only $3.45 each. We also picked up two 2 cubic foot bags of potting mix with moisture control, which was a bit pricey, but already contains fertilizer and should work well to retain moisture in our dry desert heat. Esther drives a small Honda sedan, and we already had two large picnic coolers in the trunk to transport our frozen foods from Costco. We had to move one of them to the back seat so we could get the two large bags of potting mix in the trunk. The precious tomato plants were tucked safely between our purses, on the floor behind the driver's seat.

On to Costco, where between the two of us we purchased nearly $300 worth of groceries, mostly frozen, and a very large plastic mat to go under Esther's office chair. This managed to fill every remaining square inch of trunk space, plus the cooler on the back seat. The mat got rolled up and placed in the back seat, on top of the cooler.

After a quick Costco hot dog, drink and churro, we headed for the next nearest Lowe's to check on more plants. Esther wanted another Patio tomato, and you know what a sucker I am for tomato plants. We also decided we needed a few flowers to brighten our patios and gardens. We did find a few Patio tomatoes, although they were much smaller and had no blossoms or tomatoes on them, and were not in the best shape. We caved and each bought one anyway, and had to pay the same price as we had for the beauties at the previous Lowe's. We also bought a bunch of pansies and white alyssum. The tomato plants were placed on the floorboards behind the passenger seat, the eight 6-packs of flowers were placed single file inside the rolled up office mat. By now, the poor little Honda was darned near dragging bottom! But we weren't finished with our shopping!

Back toward home, we stopped at Goodyear to do some more Wal-Mart shopping. I had to buy 20 pounds of frozen chicken hind quarters for my dogs. Yes, I spoil them with roast chicken and veggies, but they are my babies, you know ;-) And the only place left to put them was on the front floorboard, under my feet. It was a really hot day, so I didn't mind cooling my feet on frozen chicken parts. Wal-Mart had the compost I wanted for the garden, but we had no space for it so I had to pass.


Today I potted up the tomatoes and most of the flowers. I ran out of potting mix for my last large planter. 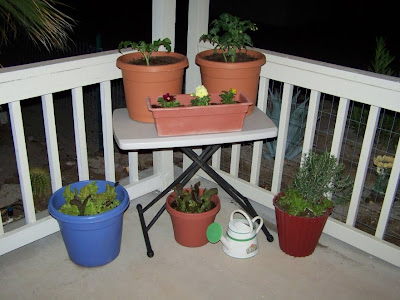 This corner of the patio gets sun from the east and south, from morning until around 2:00 pm. It also gets a gentle breeze to aid the tomatoes with pollinating. You can see the difference in the sizes of the tomato plants. The three pots on the ground are the ones I brought from Washington, and the lettuce is almost ready to pick again. I'll have some for the Monday Harvest post! Later this winter, when the temperature drops, I'll move the tomatoes to the south end of the mobile home, which gets bright, hot sun as well as reflected light. The pots are light enough to bring inside at night if the forecast is for cold weather. 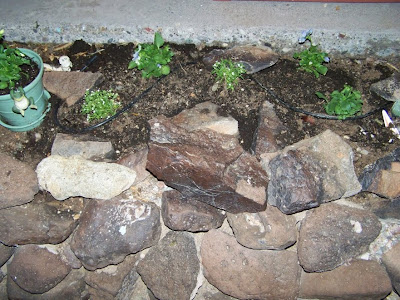 I had a bucket of compost left from the little square foot garden, so I dug it in around the end of the front rock garden. I hope it is enough to give these pansies and alyssum decent soil in which to grow. 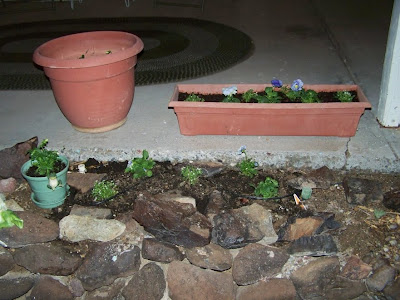 More pansies and alyssum were put into the long planter, and the big pot needs more mix before it gets planted, possibly with a geranium or two. 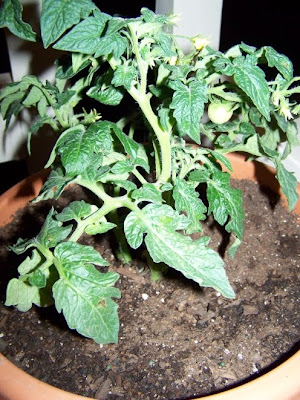 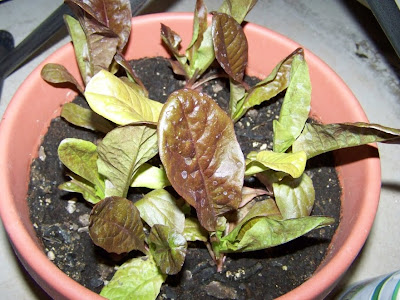 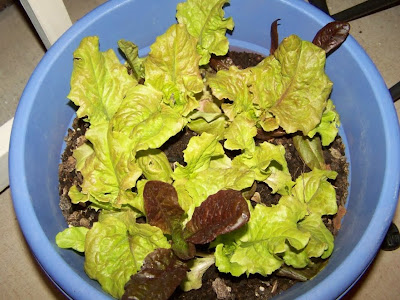 Red Sails lettuce, with a stray Red Romaine or two. 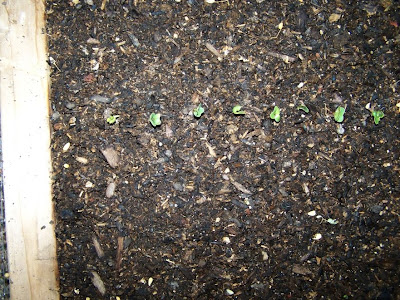 The radishes emerged in the 9 sf. garden yesterday, all three rows! No sign of lettuce yet, I hope the record breaking temperatures we had this week didn't cook the seeds. It ranged from 93F to 97F three days in a row, and the sun was brutally hot on the soil.

All in all, things are looking pretty good considering we have only been down here for about 2-1/2 weeks. I'm trying to squeeze all I can from the small spaces I have to garden.