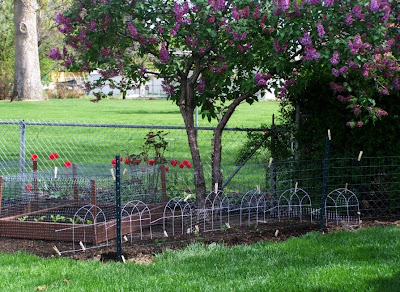 My neighbor, Pat, hollered over yesterday and asked if I was growing clothespins in my garden this year. It does look like it, as I hauled out that awful bird netting and managed to get both of my pea patches protected by clipping it to the fences with clothespins. It had to be easily removable, just in case the peas (both are bush varieties) grow taller than expected, and for picking the harvest. I hate that netting. I always manage to get my feet tangled in it, as does Annie. I had to free two of her ensnared toenails yesterday, while trying to hold her still as she panicked.

After I got the netting on, I wished I'd have had more of the plastic garden fencing. It has the same sized openings, so does as good a job as the netting without being so flimsy and tangled. Since I needed to buy more of the small, folding wire fence to keep Otto and the neighbor's new pup out of the raised beds, I decided to see if the plastic fencing was still available. After all, I had made very good use of that first roll, which I purchased three years ago! It has protected my beds from pups and birds here, as well as pups and bunnies in Arizona.

Wal-Mart did have the rolls of fencing, although I'm quite sure it cost a bit less three years ago. It's still under $10, which is not bad for 50 feet of it, and it does last forever. 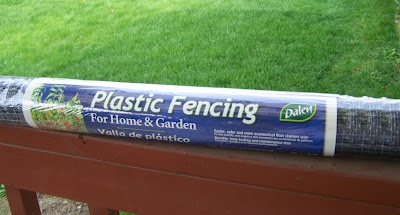 I might just go undo all my clothespin-fastened bird netting, and replace it with the good stuff. Or not. I probably have more important things to do today, like load the rest of the pile of compost into buckets, and fill the new area that I made for pole beans. I used to have half of one side of the "kennel garden" open as a passageway from the east garden to the north garden. Now that I'm removing the fence from the north garden, this is no longer necessary. I had simply pulled the chain link back and wired it up, so it was a simple matter of pulling it back over to the gate and reattaching it. That doubled the vertical growing area for the beans, but the soil must be raised and amended before I can plant there. The same needs to be done on the other side of the chain link, inside the kennel. I already brought compost in for one corner, then scattered some seeds for shade-tolerating flowers. Now the strip along the west end can also be planted with shade tolerant veggies....whatever they may be. Maybe I can get a second planting of spinach to grow there. Or maybe I'll just put in more flowers and my garden bench, then retire to the shade for the summer. Sounds good. Won't happen. 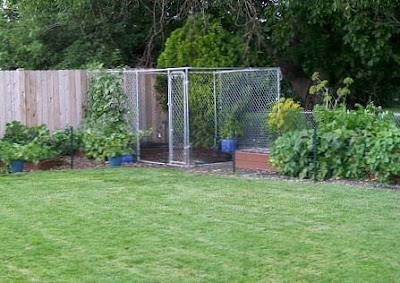 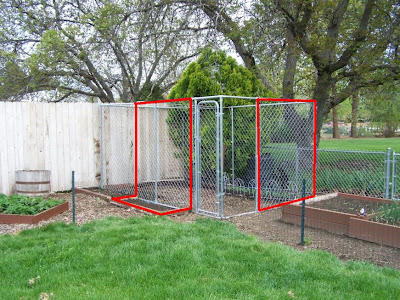 Additions (in red) to the kennel garden 2010 will double my vertical growing area on the left, and allow me to make an L-shaped pea bed on the right side next spring (or maybe for some fall peas). The small wire fence to the left is being removed, but the one on the right stays, as that is the area that is more susceptible to damage from the dogs. I enter through the kennel gate.