I had a lot of responses to my offer of Mr. Granny, but nobody wanted him except Momma_S, at Gardening With Care. Congratulations Momma_S! I'll stuff Mr. G. into one of those Flat Rate Priority Mail boxes, and ship him right off to you ;-)

Since I won't be blogging much over the next week, I'm doing double duty & catching up on everyone's blogs tonight... This is the best one YET! I read through the first couple comments before the tears of laughter hit! I'll take Mr. G, but only as a substitute grandpa, since I've never had one... Grandpa's are allowed to turn up their noses... ;-)

I almost chose to send him to Robin, The Gardener of Eden, who said:

When you feel like that...don't you just want to sell Mr. G for a nickle and give change??


********
I've been gone all day, so I didn't get photos of the garden as I'd planned. When I got home, late this afternoon, there were beans to pick, and iced coffee waiting for me at neighbor Pat's. It's a good thing I looked over the garden on my way back from Pat's patio, as I discovered my cucumbers, which are planted in a bucket by the fence, are loaded with blossoms and as dry as a bone! I'd soaked the garden yesterday, but the large leaves of the broccoli were deflecting the water away from the cucumbers. They were terribly droopy, so I pulled the broccoli (it had already been cut, and wasn't producing enough side shoots to be of any importance) and set a sprinkler by the cucumbers. I hope it isn't too little too late, as they are the only pickling cucumbers I planted.


Yesterday I pulled the first of my beets. This was not a good year for them, germination was poor, and they came under attack from birds and leaf miners. A year ago, I was harvesting so many I had to can pickled beets. This year I can't pull enough at once for a meal for two. Most of the beet greens had to be disposed of, due to major leaf miner damage, but the newer leaves were untouched and lovely. Although we don't care for the taste of them, our pet rabbit adores them, so they are included in the harvest weighing. The small broccoli leaves also go into Cookie's dinner bag. 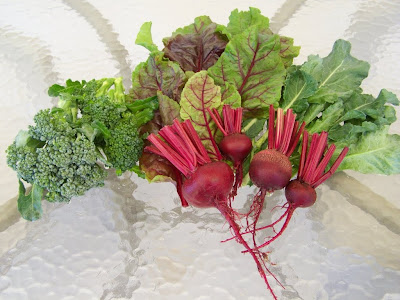 Our garden dinner last night was delicious. I marinated some thick sirloin steaks in a mixture of soy sauce, ketchup, olive oil, crushed fresh garlic and lots of pepper, then grilled them until they were medium (for me) and medium rare (for Mr. Granny). I baked the two biggest Kennebec potatoes, which were dug on Sunday, and topped them with real butter and freshly snipped chives. The green beans (picked on Sunday) were very lightly steamed, then tossed with minced shallots (from the garden) that had been sauteed in butter until softened. Seasoned with salt and pepper, they were delicious. The usual large garden fresh salad, and glasses of orangeade complimented the dinner. We had a late dessert of pineapple sherbet, topped with a few raspberries. No pie was served. 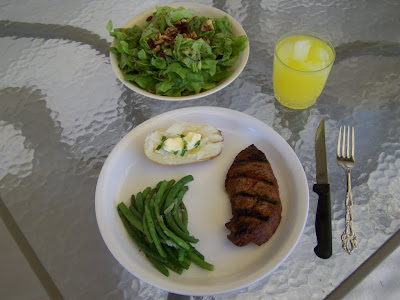