How about that....three blogs in one day!


I've had several comments about the cosmos, pictured in the first blog from today, so I thought I'd give a bit of history on it.

The cosmos were planted from purchased seeds on March 15. Three days later I noted: 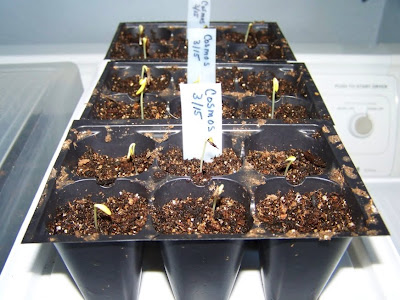 Cosmos had very good rate of germination, only 2 of 18 haven't peeked out so far. As soon as they outgrew the mini greenhouse, they were transplanted into a large container. I think I had about six plants in there!
On May 25th., I had the first blossom. The plant was probably about 18-24" tall by this time. 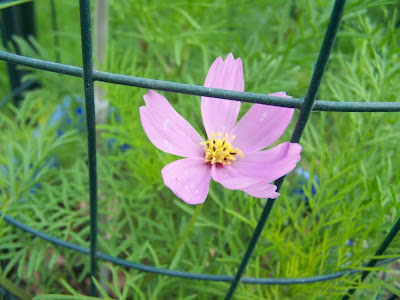 If you only have one cosmos, is it a cosmo? 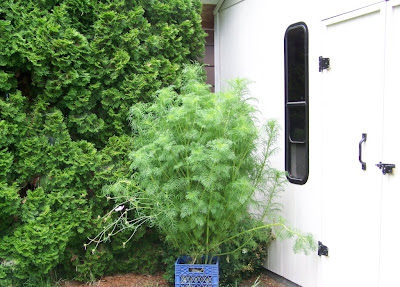 July 31, the container was moved from the main garden to its present location by the shed. All but the center plant wilted badly. The roots had grown through the bottom of the container and were pulled loose from the soil below. Shortly after this photo was taken, I cut back the wilted plants. There was one blossom and a few buds at this time, but they were on one of the plants that ended up being cut off.

Which brings us to the latest photo: 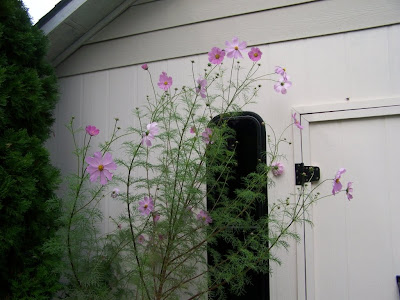 I'm not showing the ugly, cut off dead plants. That was the only thing that was distracting about this planting. I really wouldn't mind if it naturalizes in this corner. There's nothing there but an old rose bush that has gone wild and attacks Mr. Granny when he mows around it. I'd like to just kill it out and let the cosmos take over. Even if they decide to always be 8' high, they would at least hide the neighbor's shed....the one he didn't bother to paint on the side facing us.

Elsewhere in the garden, the rain has stopped, so I got a bit of garden cleanup and a little harvesting done. I pulled the rest of the cranberry beans from the fence, and was happy to see quite a few dried pods. I still probably won't have enough for a meal, but there will be plenty of seeds for next year's garden. I'll get them shelled tonight, while I'm watching Dancing With the Stars, and then I can weigh all the beans and add them to the harvest total. 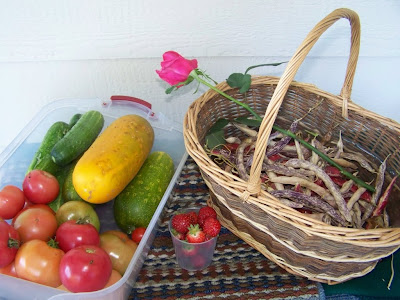 I won't be counting the weight of the three humongous cucumbers, although I weighed the largest out of curiosity. It was exactly two pounds. They were hiding on the back side of the fence, but I don't know how I missed them. I need to do a bit of research on the variety, Double Yield, to see if I should save the seeds. If it's not a hybrid, I'll take seeds from the big yellow one, as it was an excellent pickling cucumber and performed well for me this year. (*They are not a hybrid, I will be saving seeds).

I picked a few under ripe tomatoes, as well as some that are ripe. I'd like to take a few greenish ones to AZ with me, and hopefully they will ripen over the next few weeks. There was just a handful of green beans, not enough to bother weighing. The dogs will eat them raw, as a treat.

I'm still getting enough strawberries for topping an occasional dish of ice cream. The few that I've picked recently have been larger and sweeter than those picked earlier. In fact, several have never made it back from the garden, they were eaten on the spot! 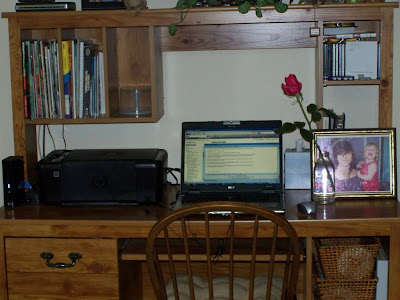 Is that tacky or what? My long stemmed rose.....in a Snapple bottle! My son accidentally broke my only bud vase, and I keep forgetting to buy a new one. 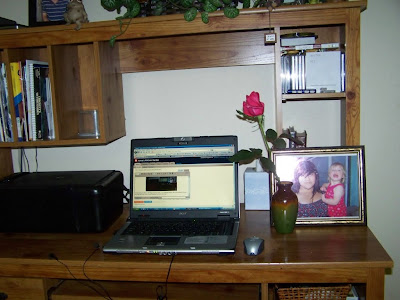 Oh, I forgot about this vase. Maybe a little "earthy" for a delicate rose, but better than a Snapple bottle, I think!

Alicyn visited this week. I'd purchased a blanket for the dogs, and it came rolled up and held by a wide ribbon with Velcro ends. Alicyn discovered the ribbon was the perfect size for a headband. 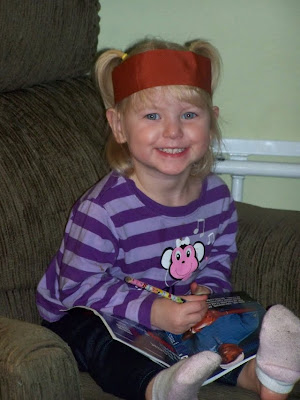 "Sniffle" I'm sure going to miss that baby and her big sissie while I'm in Arizona.