My, how the time flies! It doesn't seem like we've been in Arizona for two full weeks already. I haven't exactly been sitting still for the entire time, but it doesn't seem as though I've accomplished much, either. Yes, the garden has been planted, but that's only 21 square feet of boxes and a few pots. I spend my mornings making sure everything inside is ready for viewing, on the fat chance a prospective buyer will call for a tour of the property. I'm not holding my breath just yet, as there is nobody around! I don't know if people are coming down late this year, or maybe not at all, but it's like a ghost town around here. This is a town of only about 400 permanent residents, so absolutely nothing is happening until the snowbirds flock in.

I've already formed my morning ritual....wake up, let the dogs out, push the button on the coffee pot, fold up the dog blankets and put them in the closet, make my bed, let the dogs in and push the footstool up to Mr. Granny's bed so the pups can have some cuddly-in-bed time. Then I pour myself a cup of coffee, turn on CNN to see what is happening in my world (we don't have a newspaper in this town), and spend the next half hour just waking up. When Mr. Granny gets up, we have a small breakfast, and I check to make sure the rest of the house is clean. That involves a bit of dusting, sometimes getting out the vacuum, and giving the bathrooms and kitchen a quick spit shine.

Once I'm awake and dressed and fed, and the house is in order, I try to get some yard or garden work done before it gets too hot outside. Yesterday I planted flowers after I set myself on fire. I'd gone into town on Friday, and checked out the local Wal-Mart for something to brighten up the place. They didn't have much to chose from, and after I'd bought lantana and some type of pretty little miniature zinnias, I wished I'd gone for the pansies and alyssum, which are much more cold hardy. The lantana will just dry up and die next summer, as it is all planted in an area that doesn't get watered by the drip system, and the zinnias will be toast if/when we get a killing frost. I also purchased two bunches of green onions from the produce department, and I planted them in two large pots. That pretty much filled up all the garden. It's still a mystery as to what is growing in one of the garden beds, but even if it is lettuce, it's going to need a ton of thinning out. The seedlings were already touching and making a carpet of green, so I took a dinner fork and cultivated out little rows to make 4" squares of green. Actually, I should have just pulled a rake through them in both directons, but it's too late now! I might just turn it all under as green manure, and replant the lettuce. I hate to do that though, as it will put the plants two weeks behind. Probably a better idea would be to start a pot of lettuce seedlings that could be moved into the bed later, just in case the other turns out to be weeds. 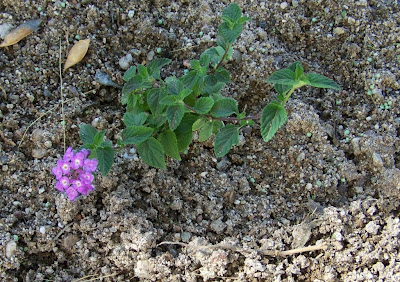 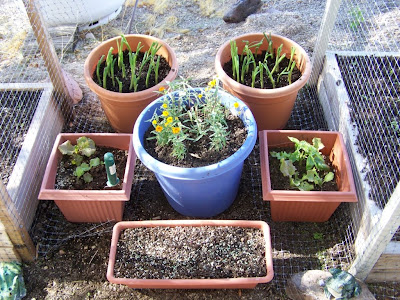 The container garden consists of lettuce and basil from home, chard, onions and some unknown variety of tiny zinnias. At least that's what the tag said.
Oh, about setting myself on fire. I was cooking an egg for Mr. Granny, and reached across the stove for the salt shaker. The sleeve of my robe made contact with the gas flame, and immediately ignited. I was right next to the sink, so I turned on the faucet and got my arm under the stream of water, but the flame was traveling up over my shoulder where the water couldn't reach. Mr. Granny happened to be sitting nearby at the table. Every other morning he's had his breakfast in the living room while watching TV, so it was just a fluke that he was even in the kitchen. He jumped up and smothered out the flames with his bare hands. My hero! Neither of us was injured at all, but it was quite an exciting few seconds, to say the least. The fire came really close to my hair. My daughter said her kitchen fire was for a new paint job. I said mine was for new, wrinkle free skin. Oh yes, I moved the salt and pepper shakers to the other side of the stove, where I don't have to reach across a burner to get to them. 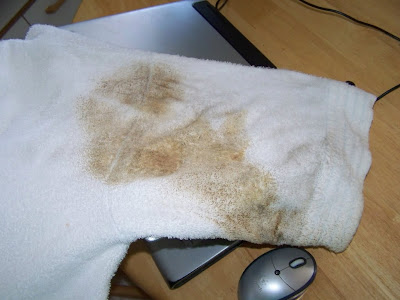 Just look at how far the fire traveled up my sleeve and across my shoulder!
Ribbit, I want you to know I'm playing cards (Hand & Foot) on Tuesdays and Fridays now, and I've won four out of four games so far!

Diane & Meems, Mr. Granny hates Cookie's harness. He says it makes him look like a sissy! This one's for you ;-) 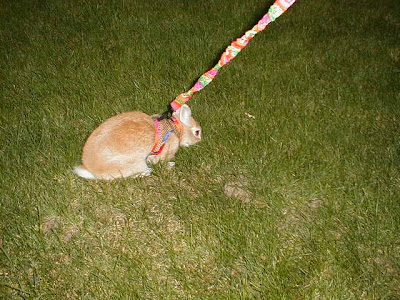 No internet yet, and the park owner doesn't know if they will be getting it at all. I did discover I can park in front of the library and access theirs even when they are closed. I had assumed they'd turn off their router on days the library isn't open. As much as I hate trying to use the laptop on the steering wheel, it can be done. Since I can't hardly see my monitor in the glare of the pickup cab, I'm pre-writing my blog to copy and paste quickly when I get on line.