The Week of September 27-October 3 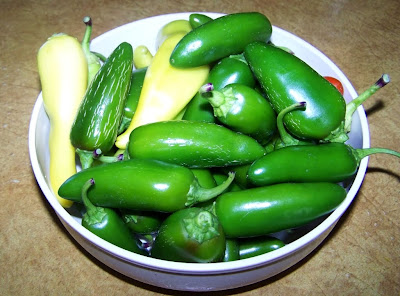 The hot peppers were all picked. It was a disappointing year for them, as they were just beginning to blossom when I made the salsa this summer, so I had to use hot pepper flakes instead of jalapenos. We did have a meal of what I thought were Hungarian Wax peppers. I did a sausage/cream cheese/Mexican blend cheese stuffing in them, but Mr. Granny did not like them at all! There was no heat to the peppers, so I'm not sure they are Hungarian Wax. Maybe banana peppers?

This year's total yield of hot peppers was a mere 2.4 lb. compared to last year's 10.2 pounds, from the same number of plants. 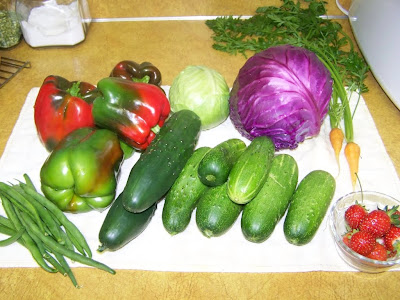 The last two heads of cabbage were cut. The tiny one is a Gonzales that was direct seeded mid-summer, the large red cabbage was transplanted to the garden early last spring, but took forever to finally form a head. The other red cabbages, from the same planting, were cut long ago. I'm still getting a few green pole beans, but they are being consumed by morning glory vines, so kind of hard to find and pick. I've been very satisfied with my two container plantings of cucumbers, which have given us more than we can eat and lots of pickles. I'll definitely plant the Double Yield cucumbers again (seeds from Dan). 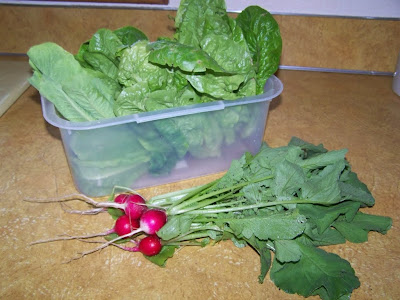 This is the last of the lettuce, it has now all bolted to seed. I'll probably not get many more radishes, as they seem to be mostly tops with skinny roots. The few I did pull were really good. 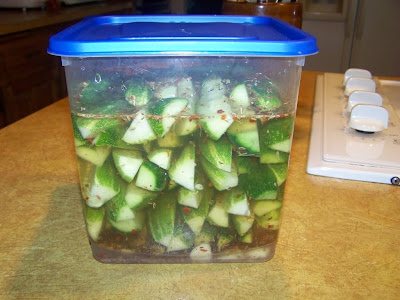 Enough pickling cucumbers were harvested through the week to nearly fill a gallon container. Being out of jars, I resorted to using a large plastic container and making refrigerator dills. These were taken to my dill pickle fanatic daughter, who happened to have some of my emptied quart jars. The pickles were transferred to the jars and are now living in her refrigerator. I won't be making any more pickles this year, as I'm now out of jars and out of vinegar. Since we'll be leaving for Arizona in 12 days, I don't want to be buying more vinegar right now. All that kind of stuff will have to be purchased when we arrive at our winter home, so there's no sense in buying it here and having to transport it. 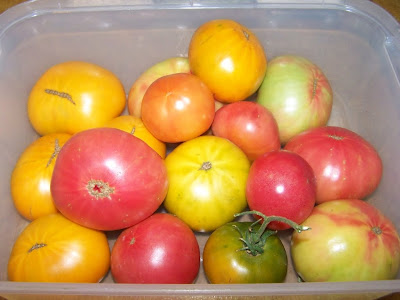 The last harvest of September. 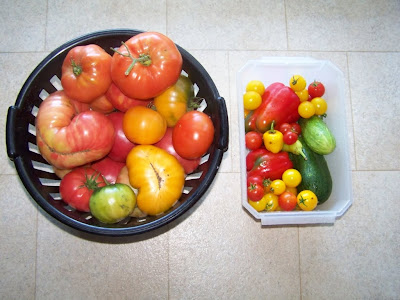 And the first harvest of October.

The Brandywines continue to be the star of the tomato garden, but some of them are beginning to look rather odd, with yellow streaks and blotches. The flavor of the odd ones is not good at all, and they are mealy textured rather than sweet and juicy like the earlier tomatoes. I don't think our mid-forties nights are doing anything for the flavor. 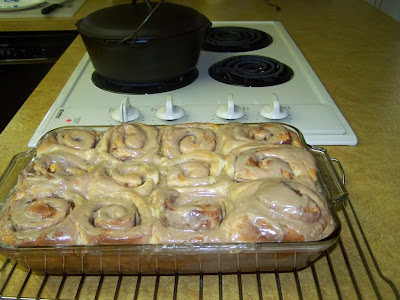 I used my regular recipe for cinnamon roll dough, but followed a different recipe for the filling and frosting. These babies are sooooo sweet! Way too sweet for my liking. I liked the frosting, which is flavored with coffee and maple extract, but the amount of sugar in the filling needs to be cut by half, and maybe just a wee bit less frosting would be nice, too. That's a pot of beef stew simmering on the stove. It sure tasted good on a cool evening.
18 oz, hot peppers (final)
408 oz. tomatoes
53 oz. cabbage (final)
62 oz. cucumbers
41 oz. sweet peppers
5 oz. pole beans
3 oz. carrots
4 oz. strawberries
12 oz. lettuce
4 oz. radishes

Total for week: 610 ounces - 38 pounds
Year to date: 871 pounds
Daphne's Dandelions is the host for Harvest Monday, where everyone can share links to their harvest for the week. Please visit her blog and leave a link, so we can enjoy your harvest photos!