Pardon my French, but I'm hopping mad. I went over to the Charter Cable office yesterday, to find out how to snowbird my internet account while we are in Arizona. I was informed it could not be snowbirded, as I was under a two year contract, and even if it was unavailable to me, I still had to pay the monthly charge or pay a $75 cancellation fee. That's not what I was told when I had it last year. I was told I could pay $7 a month while I was gone to keep the account active. I opted to just cancel and pay the $30 reconnect fee upon returning. Now I'm told I agreed to a two year contract for special pricing. They were the ones guaranteeing me a price that wouldn't change for two years, nothing at all was said about my having to keep their service for that length of time. The rep said a contract was mailed to me about two weeks after I began using their service. Like I told her, I never even received a statement from them for nearly two months, as they were sending it to the wrong address! It wasn't until I called to find out what was going on that I discovered they were using my house address (site of installation) rather than my PO box (on the order), so everything was being returned to them.

That's the same thing I went through a few years back with Clearwire. They changed their policy on snowbirding accounts, without notice, after I had signed with them, and it took letters to the state attorney general and the BBB to get their cancellation fee waved (I think it was around $135).

Looks like I'll be back to square one trying to find an internet provider next spring.

Mr. Granny decided to help me in the garden this afternoon. That man is worse than a bull in a china shop! He removed all my pepper plants and, as he shook the dirt off the roots (into the paths, of course), peppers were flying everywhere! I scrambled to pull them off the plants and off the ground, and ended up with a goodly amount. Seventeen pounds of them, to be exact. 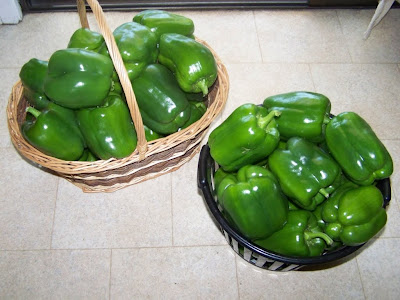 I do wish they'd have had time to turn red. I'm not fond enough of green peppers to want 17 more pounds of them in the freezer, so calls will be put out to the kids to "come and get 'em". 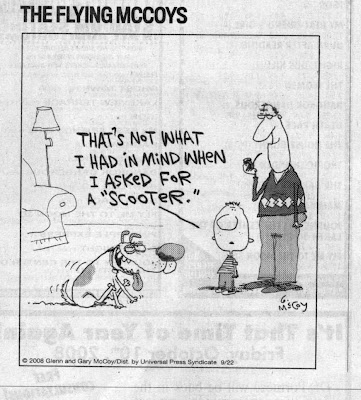 Poor Annie. She just can't seem to lose any weight. In fact, she's gained over four pounds since her last checkup. She's had her thyroid checked, and it's OK. She's a really lazy dog. She doesn't get much exercise at all, she'd rather sleep in her blankie most of the day. I play fetch with her, but she doesn't fetch, so I have to go get, and I wear out faster than she does. I have really put my foot down on Mr. Granny lately, because I know he slips her food she's not supposed to have. I have her on a very strict diet, and I stand over her so she doesn't gobble her food and then go help Otto with his.

Tonight she had her regular dinner of lean chicken and green beans, then she kept butting my leg, wanting me to feed her some of my dinner. After suffering through much eye rolling and nose butting, I finally gave her two small chunks of cantaloupe, which she gobbled up like a starved woman. The nose butting kept up while I was loading the dishwasher. I had the trash can out from under the sink, and Annie got in the cupboard and wouldn't come out. I had a large lettuce leaf in my hand, so I lured her out with that. I really didn't think she'd actually eat it.....but she did! 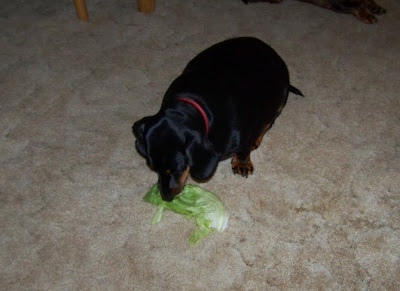 At least it's not fattening!