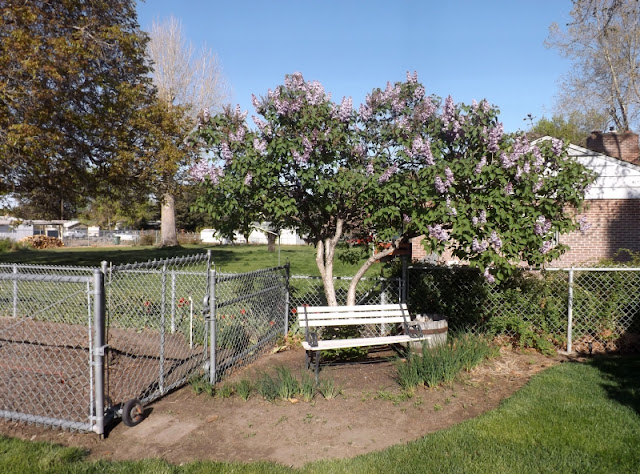 The blooming of the lilac tree kind of crept up on me this year.  I almost didn't get a bouquet for the house before they passed their prime!  Usually I fill the house with lilac blossoms, as they are probably my favorite flower (or a close tie with daffodils).

I was too busy elsewhere this week.  Son John came over on his day off, and he and I got the new rain gutters installed on the front of the house.  He installed, I helped by holding up the long sections of gutter while he attached them, and then I painted them.  I still have to put another coat on the garage side, but I got sidetracked today.....by sunshine!  I was itching to get out to the garden. 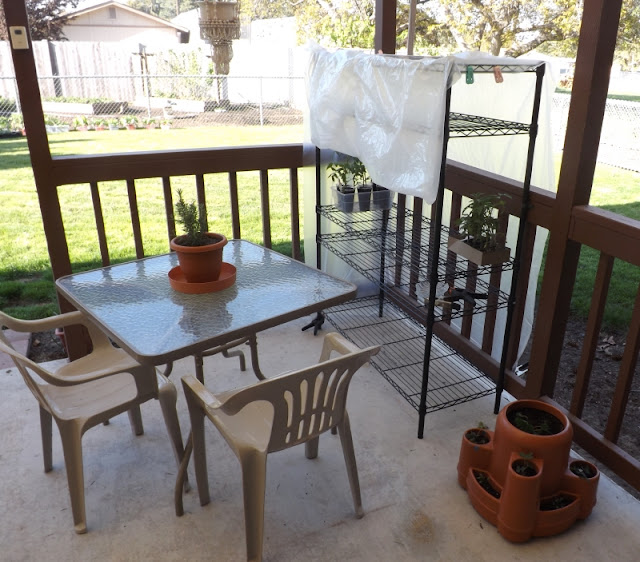 First thing I did was move the seedlings off of their new place on the patio (the same shelves, moved and equipped with plastic for wind protection) and put them in the yard for some sun. 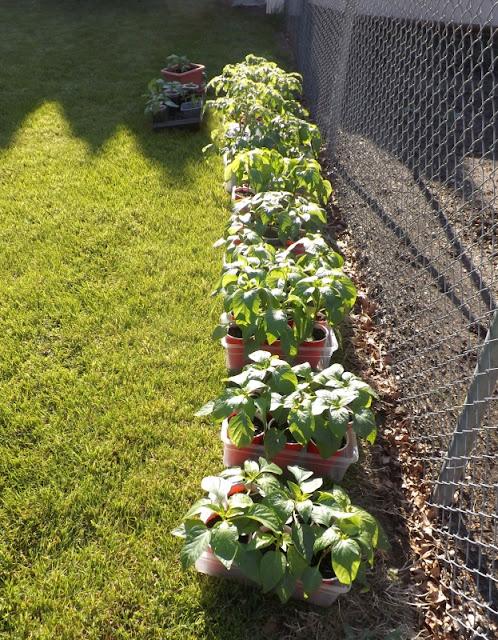 I think they liked it! 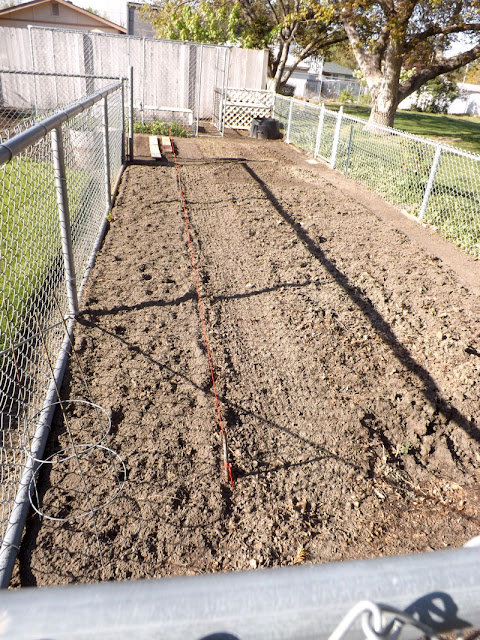 I headed for the garden with my little electric tiller and dug, amended and leveled out the entire east garden.  I'll have room to plant 36 sweet peppers along the fence to the left, and for four 4'x6' beds of corn on the right. 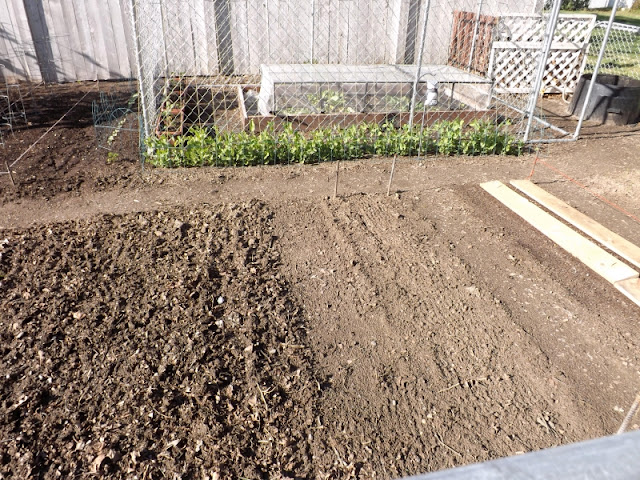 Some small onion plants are in a bed to the right of those boards.  They didn't quite make it into the picture.  The black container holds some potatoes planted in chopped leaves.  Under the boards are the carrot seed mats, and also in that bed are teeny tiny carrot seedlings where the boards have been removed.  To the left is a wide row of bush beans, then a large expanse where butternut squash vines will someday run rampant.  Sugar snap peas are growing well on the kennel fence.  Beets, spinach, lettuce, carrots, celery and strawberries are inside the kennel.  To the left of the kennel the parsnips are just beginning to emerge behind the row of radishes. 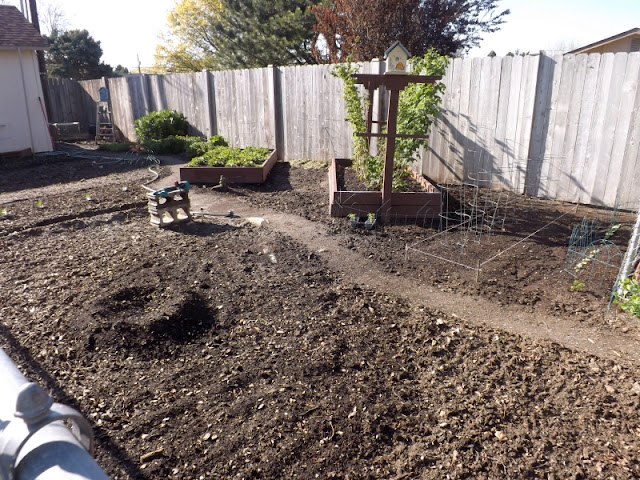 The next bed, in the back, will hold the remaining sweet pepper plants.  There was room for nine there, and I'll interplant some basil and probably a few marigolds.  To the left of that bed are the raspberries.  They are quite late this year.  To the left of the raspberries are the strawberries.  They are absolutely loaded with blossoms, more than I've ever seen on them before! In the foreground will be the butternut squash bed.

The last of the planned sweet peppers, all the others have been given away or promised to my kids. 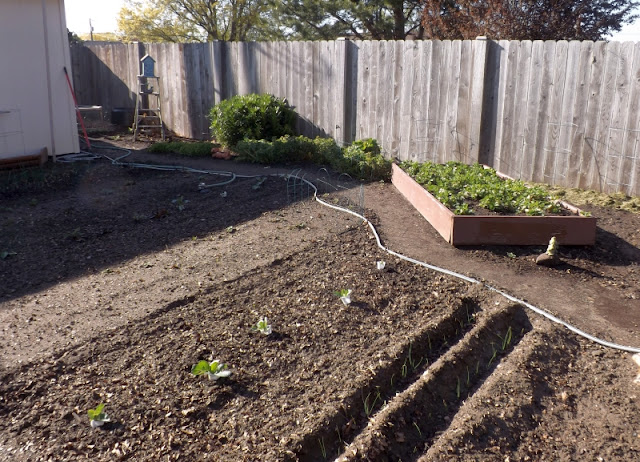 The trenches hold the leeks, started from seed and not growing at all since they were planted a couple of weeks ago.  To the left of the leeks are Golden Acre cabbages.  Next is the bed of Yukon Gold potatoes, which are just emerging and seem to have escaped the freeze that hit the other potato bed. 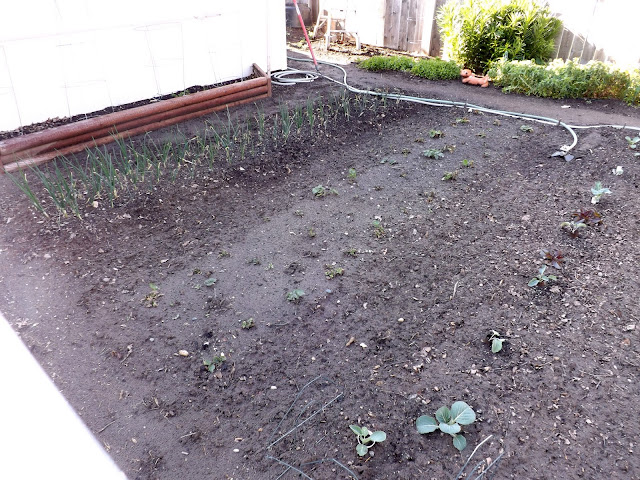 The next bed holds 5 broccoli plants and 6 Gonzales cabbages.  I lost a few to cutworms last week, so they were replaced and cutworm collars were put around all of them.  It looks like I've lost another broccoli, and it was protected with a collar of cardboard.  To the left of this bed are the red Norland potatoes that suffered frost damage the other night.  It does look like they will be alright, they are showing some new green growth.  The Walla Walla sweet onions are not growing as well as in previous years.  Usually we're eating some in salads by now, but these are not nearly large enough.  The lettuce and garlic are growing behind the shed, but it was too shady to get a good photo of them. 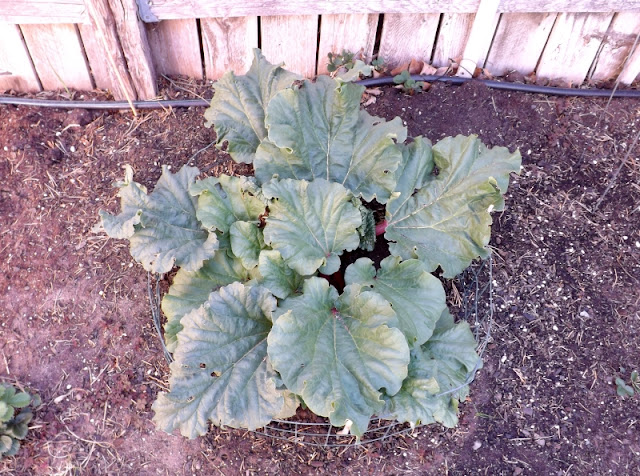 It won't be long before we'll be eating the first rhubarb pie of the season! 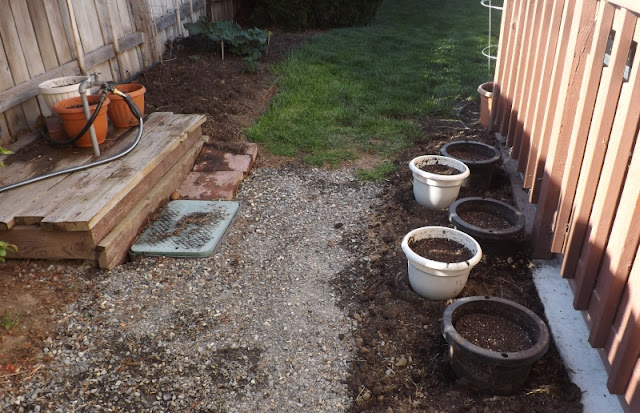 I set up and filled all the pots with potting mix.  The black pots on the right will hold three Patio tomatoes, the two white pots are for Happy Yummy Hot peppers.  The white pot on the left is for a fourth Patio tomato, and the other two pots will hold jalapeno peppers.  It's warm and sheltered here, so I think I might get the pots planted by the end of the week. 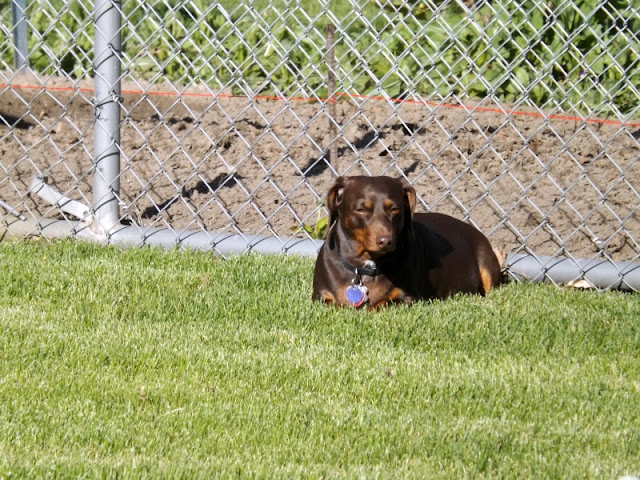 Annie was MIA, but Otto was enjoying some time in the sun. 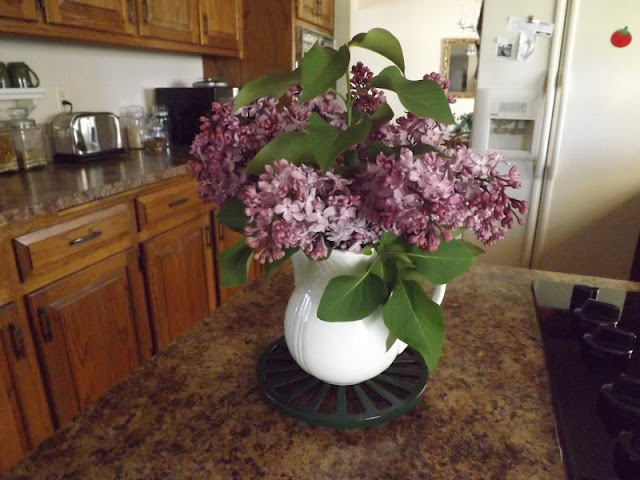 And I DID get a bouquet of lilacs to enjoy in my kitchen.

It's a good thing I got so much done today.  Tomorrow morning I have to report for jury selection  :-(