Back in November I started a little container garden. This is what it looked like on November 13th. The clear plastic containers on the plant ladder, and the planter on the far left were greens I potted up and brought down from the garden up north. The other pots contain spinach, lettuce, onions (green ones from the grocery store), beets, parsley and a couple of cucumbers. 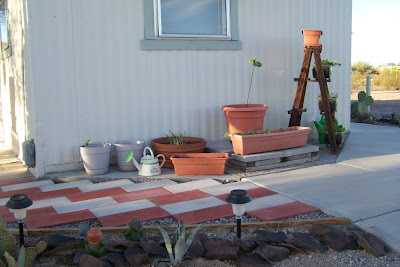 This is a garden?

Since then, I've used all the older greens except those on the far left. One looks suspiciously like a cabbage, so I'm going to let it mature. Most of the other seeds germinated and are finally showing some growth, having done almost nothing for over a month. Others, more recently planted, have nearly caught up to the earlier seeded plants. 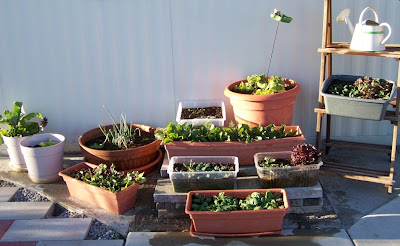 Rather pitiful when compared to my home garden, isn't it?

It looks as though January 1 might be the optimum date for starting these cool weather crops. Nothing was gained by planting two months earlier. In fact, I had dumped out the contents of a planter of lettuce seedlings last spring when we were ready to head north. Last week I noticed some tiny lettuce plants sprouting in the dirt where I'd emptied the container! They had laid dormant through the hot summer, fall and most of the winter. They must have sprouted around January 1. I moved them into one of the containers, and they're looking quite happy! Maybe when I'm ready to go back home I should sprinkle some of my leftover lettuce seed out in the back and just see if it sprouts and grows in January of 2010.