Mr. H fought me all the way on adding another box to the little garden. I don't know why he was so stubborn about it, it's only a tiny 3' square box! I had asked him to help me put it together, as the scrap lumber I'm using is so twisted it takes two to hold it in place and screw it together. He did finally give in, and even insisted I toss one piece of 2x4 in the garbage and cut the section from a new one. I wasn't worried about a slightly skewed garden, the boards are mainly for stapling poultry wire for a rabbit barrier. Sure, I'd like beauty...but I'll settle for utilitarian.

Anyway, Mr. H insists nothing will grow large enough to eat before we head back north. He just doesn't "get" that I've already calculated the days to maturity, and that we'll be eating spinach, lettuce, beets and radishes long before March 15th. He insists everything has been out there in pots for "months" and hasn't grown a bit. I say pooh on Mr. H. He knows nothing about growing a garden!

After I got the frame in place, I transplanted the remaining spinach and lettuce, then decided to attempt transplanting the beets. I think they should do fine, as the soil they were in was so loose there was no damage at all to the tap roots.

This bed didn't get the addition of potting soil and composted manure that the first bed got. It will have to survive in what I could save from the pots in which they grew, mixed with the good old desert sand. I will give them an occasional drink of liquid Miracle Grow.

The rabbits didn't come back last night, but I wrapped the rest of the poultry wire around the new bed just in case. I hope it holds until tomorrow, when I'll add some posts and staple it on. I hate the looks of the wire, but it has to be. 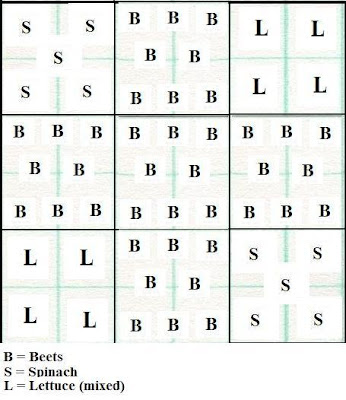 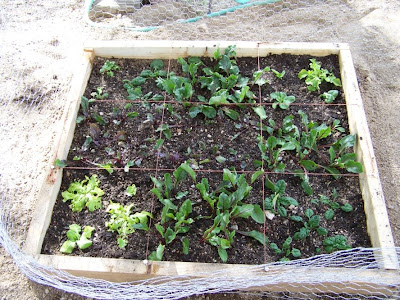 Everything's planted...the smaller beets are actually the earliest ones planted. The bigger ones were seeded about a month later. 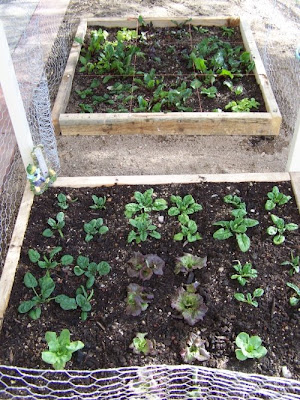 Beds #1 and #2 complete and waiting to have the poultry wire stapled in place. This should give us some nice salads soon.