Yesterday I noted my garlic seems to be suffering from a disease. Just Jenn thinks it's a victim of purple blotch. I looked at photos of affected plants on Google Images, and it does look like the same affliction. 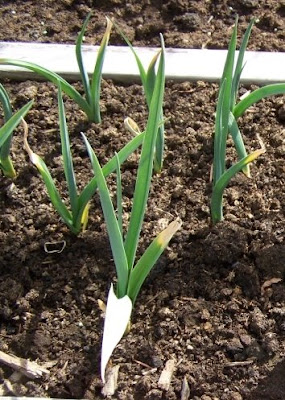 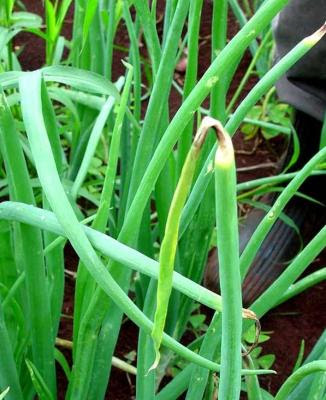 "Purple blotch is a fungal disease that is most common in areas where plants are irrigated and in the South. The spores, which are spread by splashing water, overwinter in crop refuse and germinate in moist conditions.

SOLUTION: Use a fungicide to control this disease. To discourage purple blotch, remove crop debris and avoid growing in wet soil.

*Spray plants with garden sulfer, an organic fungicide, at the first sign of the disease, and repeat according to package directions.

*If sulfer is ineffective, remove the infected plant. At the end of the season, make sure no plant debris, where the spores can overwinter, remains in the garden.

*Discourage the disease by growing future onion family crops in well-drained soil and spacing plants to allow for air circulation."

Jenn has been spraying her garlic with a commercial fungicide, and it doesn't seem to be working so I'm going to try a different approach. I remembered reading how corn meal is very effective as a fungicide. That's something I have on hand, right here in the kitchen. so if it doesn't work, I'm really not out anything.

Cornmeal Has Powerful Fungicidal Properties in the Garden
Using Cornmeal as an Organic Fungicide
Who would have thought that something as seemingly innocuous as cornmeal would have such potent fungicidal properties? Researchers at Texas A&M Research Station in Stephenville, TX, noticed that a peanut crop planted following a crop of corn didn’t suffer the usual fungus diseases. Further research showed that cornmeal contained beneficial organisms that were at least as effective as common chemical fungicides. Somehow cornmeal is able to attract a member of the Trichoderma fungus family, which is a good fungus that kills off disease causing fungi in a matter of weeks.

Howard Garrett, the Dirt Doctor, has continued the study and finds cornmeal effective on most everything from turf grass to black spot on roses. Furthermore, since it is entirely organic, it can be used on edible crops.
How To Apply

Dry: Work 2 pounds of cornmeal into the soil for every 100 square feet. Water well, to activate the fungus killing properties. One application per season is usually sufficient, but repeat applications won’t hurt anything.

Spray: What’s called ‘cornmeal juice’ can be made by soaking 1 cup of cornmeal in 1 gallon of water overnight. Strain the liquid and use as a spray on susceptible plants.

Tomorrow my garlic will get a cornmeal juice bath.