It seems I missed "Seedling Saturday" this week. Yesterday turned out to be such a lovely, sunny day that I got carried away with actual gardening, rather than photo taking. But beware...I made up for it today!

Our irrigation water was finally turned on, after nearly a week's delay. We are blessed to be in an irrigation district where we live. We get all of the water we can use, from April through most of October, for $150 a year. When we moved here in 1974, I think we paid $45 a year. We have to pay for it, whether we use it or not, and our small yard pays the same as the neighbor's acreage....not exactly fair, but I'm happy to get it anyway. I'd hate to live where I had to worry about my garden dying because of a shortage of water. Now, before you tell me to get a rain barrel, let me tell you it almost never rains here in the summer/fall. The area where I live in Eastern Washington isn't like Seattle. If you ask me to show you something "green", I can point you to a good stand of sagebrush, although I must admit our part of the state is becoming greener all the time, with orchards and vineyards and crops and gardens thriving from the water we receive from our irrigation canals.

So...the water got turned on, which means a day of flushing irrigation lines and cleaning or replacing the screens in the sprinklers. Yesterday was the first of four such days, as I only tackle one of the four lines at a time. This year I have some work ahead of me, designing another system for the garden. Grass can handle Rainbird impulse sprinklers, but not everything in my garden wants its foliage wet.

April has been quite busy so far. Wednesday we had rain, which kept me out of the garden. I drilled holes in plastic containers of previously planted parsnips, spinach, broccoli, cauliflower and cabbage (all planted in soil blocks), shut the tops tightly and placed them out in the garden to sprout/grow (ala Winter Sown). Then I mixed peat moss with the potting soil I had previously made, to lighten it up. I then made 18 soil blocks for lettuce (6 each Red Romaine, Yugoslavian Red and Buttercrunch) and also put them in sealed plastic containers in garden. I planted 3 Purple Beauty peppers in soil blocks, and put them on heat mats in greenhouse. Only one of the 8 I planted on 3/13 has germinated, so I'm giving them another try. I had damp potting soil left so I made 21 soil blocks to dry for later use. Then I potted up 16 tomatoes into 16-ounce cups. The first Alderman peas (3/19) and beets (3/19) were finally showing in the garden!

On Thursday I babysat my granddaughter, Alicyn. I had forgotten a five-month-old could be more wearing on my old body than a day of digging garden! I had fun with her, though. We needed time to bond after my long winter away from her.

Friday I potted up the last 18 tomatoes into 16-ounce cups. The ones I had potted up on 3/30 have grown much larger than those that were not potted, actually to nearly double the size in 4 days! This gives me 42 tomato plants in the mini-greenhouse, and 3 in the plant window, for a total of 45 plants. Two more of the Purple Beauty peppers (3/13) finally germinated, then one promptly keeled over and died, so I only have two survivors. The first Glorious Gleam nasturtium germinated too, but I accidentally smashed the soil block, so may have harmed the seedling. I planted 36 Gourmet Blend radishes, 33 yellow onion sets, 40 Red Ace Hybrid beets, 20 Detroit Supreme beets, 2 two-foot rows each of Chantenay, Imperator, Rainbow Blend and Scarlet Nantes carrots in the garden.

Also on Friday, I received a gift of seeds from Cheryl of Cheryl's Garden Goodies. She sent 10 seeds of borage, which I planted in three clumps in front of where the pole beans will be, 30 Chioggia beets that were planted in east bed #1 behind the green onions, 10 Lemon cucumbers, five of which were planted in soil blocks and will be grown in pots and the rest saved for next year, Spicy Globe basil that got started in 5 soil blocks and will also be planted in pots with the rest being saved. She also sent Icicle radishes, which I'll plant in the fall (I had just planted a second planting of radishes that morning, before I got the mail) and salsify, which I have never tried. I'm keeping these for next year, as I have parsnips to try this year and no space for the salsify, which also has to stay in the ground into the winter months. There was also a packet with some very large seeds that were not identified. I thought they might be cannas. Cheryl later confirmed that they are cannas.

So far I'm not happy with the plants I put outside in the sealed containers on Wednesday. Even though the containers are well vented and have a lot of drainage holes, and I pull the lids off during the day, the soil blocks are really soggy and most of the seedlings are damping off. Rather than risk losing all the parsnips, which haven't yet germinated, I went ahead and planted the soil blocks into the garden. I put them in three staggered rows (11/12/11) so there was room for 34 of the 36 blocks. A few of the spinach plants had germinated (some had already succumbed from damping off) so I filled in a few gaps in the two rows previously seeded in the garden. Even though they have not yet germinated, I think I'll go ahead and plant the other soil blocks today, which are lettuces and brassica, as they can all withstand the cool weather. I have decided I will probably only direct seed these into the garden next year. The greenhouse is wonderful for a lot of things, especially the tomatoes and peppers, but I sure haven't had very good luck trying to start the cool season vegetables.

I went out to take photos of the garden this morning, and saw that the sugar snap peas are coming up where I watered yesterday, but not where the sprinkler didn't reach. This is an area of the garden that gets a "sprinkler redo", so it needs to be done soon. 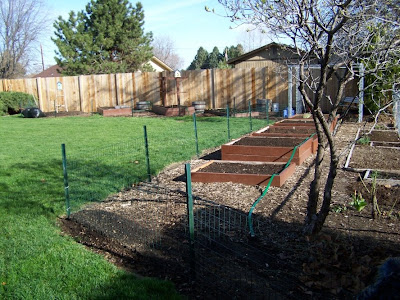 The garden looking rather bare in early spring.

But there are signs of life. A row of radishes..... 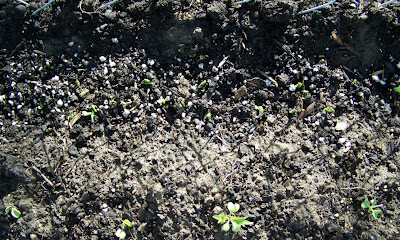 Look closely, the peas are peeking out, with mesclun at their feet. 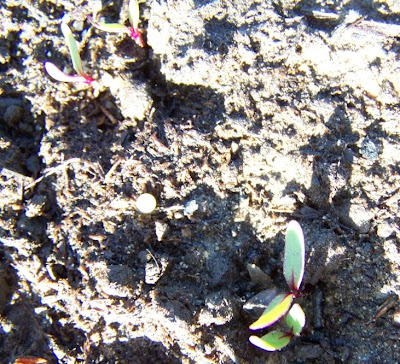 Beets are popping out of the ground. 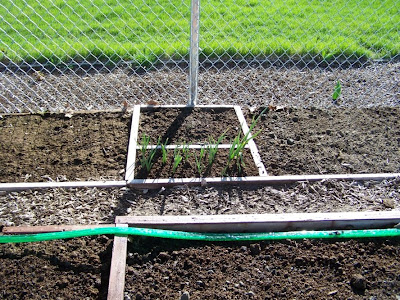 The little patch of garlic is growing stronger, but looking rather lonesome there by itself. 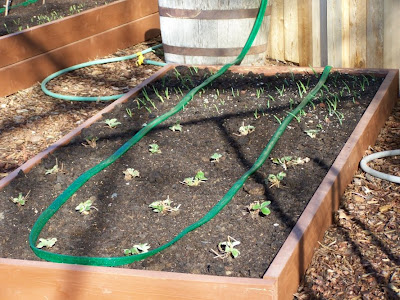 The strawberries are leafing out, and the onions are growing like mad. I hate photos of hoses laying all over the garden, but what must be, must be. At least for now.

Spinach is growing in the raspberry bed, but no sign of new shoots on the raspberries. So far the new blueberries seem happy in their barrel planters. 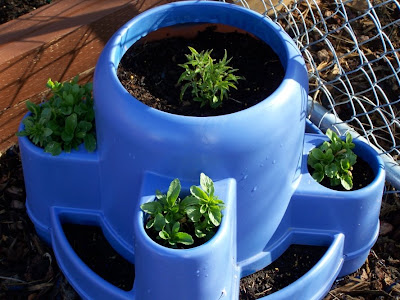 I'm so happy I painted this pot blue last fall. It is such a bright spot in the garden. I'm also happy to see that the pansies and the lavender clematis survived the winter and are growing well. I think the Spicy Globe basil would look nice in those empty spots, don't you? 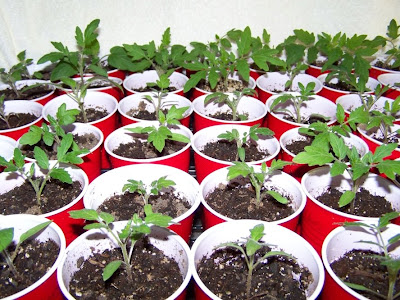 In the greenhouse, the tomatoes have all been potted into larger containers. 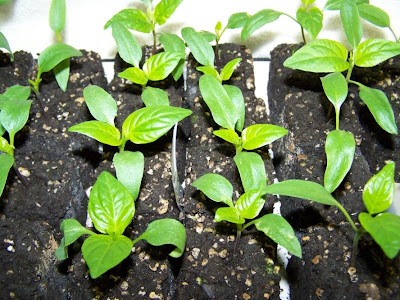 And the peppers are getting big and strong...except for the two tiny Purple Beauty peppers who were too embarrassed to have their picture taken. 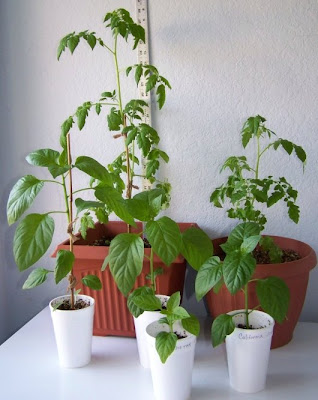 The Arizona plants are getting so large, the tallest tomato has now grown to 28" and reaches to the top of the plant window. It will soon have to be moved outside to spend its days, and be brought in to sit on the kitchen floor at night. 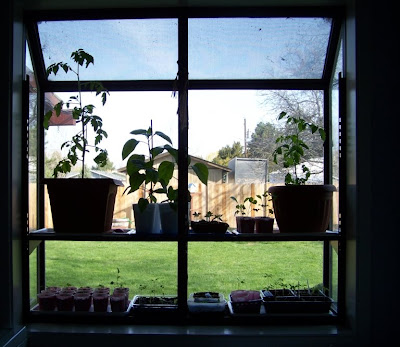 I'm limited to only two shelves in the plant window now, to make room for the tall tomato. Its blossom, by the way, has dried up now. Unfortunately, there is no sign of a baby tomato forming. Both tomato plants do have new blossom clusters, so maybe....someday!