No matter how small, the first spring harvest is a beautiful sight to behold! 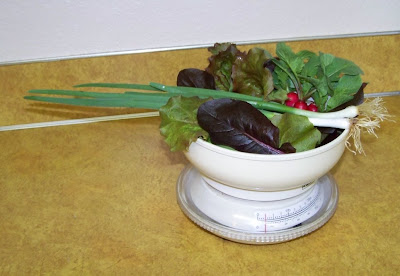 Tonight I'll have a lovely salad of mixed greens; Prizehead, Red Sails and Red Romaine lettuces with baby spinach. There would have been a fourth lettuce, Buttercrunch, but the quail came through this morning and nibbled all the outer leaves. I put some bird netting over the bed today, so maybe next time I'll get some green lettuce to go with the red. I pulled five little radishes and two nice green onions. I've planted so many of both, I'm not shy about pulling some when they are still quite small. It's not a lot, but I got to add four ounces to my produce scale! It would have been more if I hadn't trimmed about 4" of roots off of those onions, just so I could get them in the picture! Roots are really running deep in this good compost rich soil, which bodes well for the carrots and parsnips!

Yesterday it got really warm, 88F, I think. I installed a new garden sprinkler, so now the entire garden should have good coverage. Unfortunately, the new sprinkler will water the leaves of the indeterminate tomatoes when they get planted. I'll be sure to water very early in the mornings, and hope it doesn't cause disease problems.

I set many of the seedlings in the garden to get watered, forgetting the godetia didn't have drainage holes in its container. The soil blocks got completely waterlogged, and the poor plants were drowning, so I plucked them out and planted them in the garden. I also planted the four survivors (of 7) Crackerjack marigolds (4/16). Then I weeded and edged around the patio, where I would like to eventually plant strawberries. I'll be getting runners from the new plants one of these days, and I don't want them to go to waste.

Today I cleaned patio and hosed everything down well. OOPS, knocked down a hornets nest, so I had to evacuate the area until the hornets moved on. When it was safe to go back out, I mowed around edges of back yard and added clippings and leaves to the fenced compost pile. I potted up 12 pepper plants into 16 oz. cups, as the roots were growing out of the bottoms of the soil blocks. I planted another pepper plant in decorative pot for the patio.

I planted three dwarf nasturtiums (seeds), one cabbage (plant) and one basil (plant) in the side garden, where the tomatoes and cucumbers will be in containers. Then I moved all the ramaining seedlings to the corner of the patio, where they will get morning sun rather than having to move them out to the lawn each day, which is getting very tiresome.

The larger of the two AZ planted Tumbling Tom tomatoes grew four inches since I took its picture four days ago. At an inch a day, it will soon take over my house! 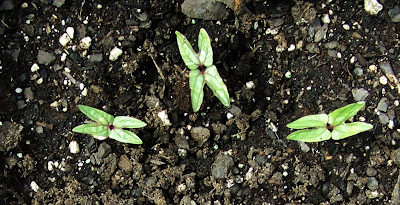 Aren't the baby morning glory leaves pretty? They remind me of fairy wings. 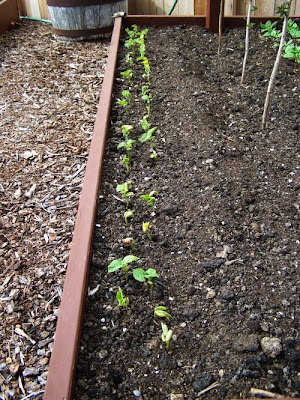 One hot day and the green beans go crazy!