This week I added a bit of garden art to the veggie garden. 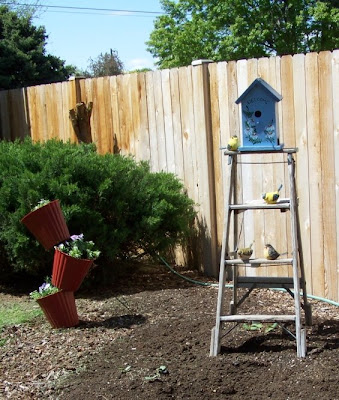 I built a tipsy planter, and gave my uninhabited birdhouse some birds. These birds don't eat my pea vines or poop on anything! 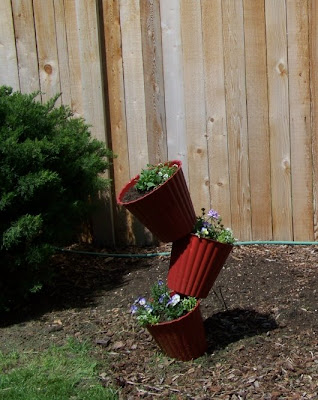 I planted the tipsy pots with petunias, violas, alysum, verbena and a rosemary plant. The rosemary will have to be moved when it gets larger, but I will just put it in a bigger pot and let it travel south with us next October. That way it won't winter kill like my last two did.

I ran into a little problem while installing the T-posts in the tomato bed. I had planned on pounding three of them in at a slight angle, tilting out at the tops, down each side of the bed. I was then going to use the Florida weave method of trellising, with a single ditch down the center of the bed to supply both sides with water and fertilizer. I felt the outward tilt would allow plants on both sides to have plenty of air circulation, while also keeping the tops just a bit lower to the ground for easier access. I didn't think about the tree roots that were still under that bed! No way could we pound those posts into the ground. My son ended up forming them into X shapes, drilling through the flanges on each end and securing them with large screws, then using heavy wire to tie them all together securely. It will be a little difficult to get the weave started on the lower sections, but once the plants grow up to the cross bars it will get easier.....I hope! If I had only known this was going to happen, I would have planted the tomatoes further toward the outside edges of the bed. Now I have lettuce, carrots and flowers planted along the edges, so I'll just do what I can with them. 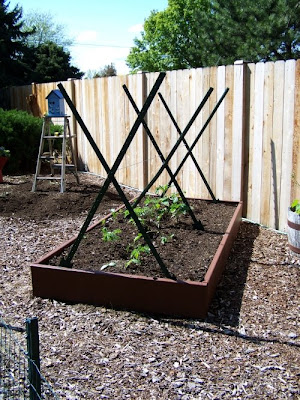 Not that I expect all of these tomato plants to actually grow. They were looking really good until two weeks ago, then the leaves began curling on most of them. I figured they were stressed, and would perk up once they were planted in the garden. Some of them did, and look like these (click on photo to enlarge):

The Good
But some didn't and look like this (don't click to enlarge if you're squeemish. It's not good: 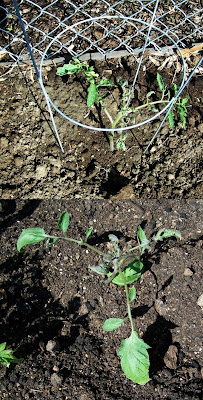 And the variety I was most looking forward to trying, Green Grape, which only germinated two of the three seeds planted, ended up looking like this: 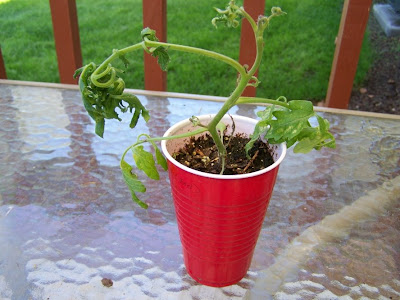 Now, is that sad or what? All of the seeds were free from WinterSown Org, and all the plants were treated the same. I'd say fewer then half of all those grown look nice and healthy. As much as I was looking forward to growing heirlooms, I really think I need to make sure I have disease resistant varieties in the future.....I'll probably go back to growing my good old standby, Celebrity, that have never failed me. 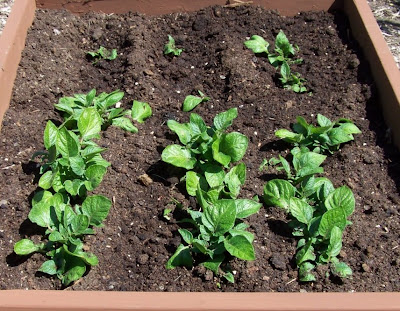 There are two varieties in this bed. The small ones in the back are a later variety than the larger ones. This is the second hilling for the big ones, I'll probably add another 3-4 inches and then be done with them until time to harvest the potatoes.

It really is beginning to look like spring in the garden! 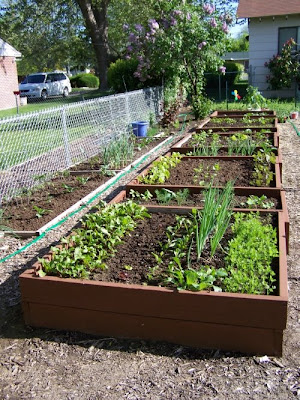 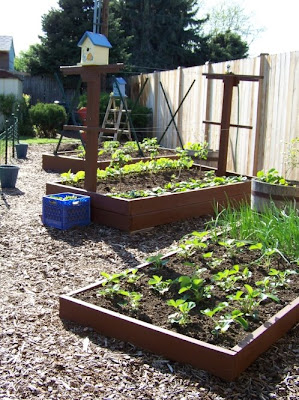