There were a few interruptions on the shed building. First was the air compressor dying and its subsequent replacement. Then our neighbor decided to remove part of the hedge that separates our properties, a decision that made us happy as we have had some close calls getting out of our driveway lately. With the first few Bridal Wreath shrubs removed, we will have a clear view of the street and oncoming traffic. Son John was pretty handy with the shrub removal, having access to a fork lift! When he'd finished that job, it was too miserably hot to work on the shed. By noon we'd tied the old record for the hottest day in May at 98F. 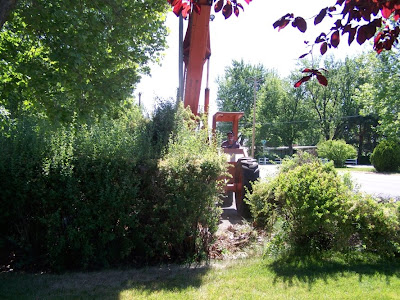 John pulls out the neighbor's hedge 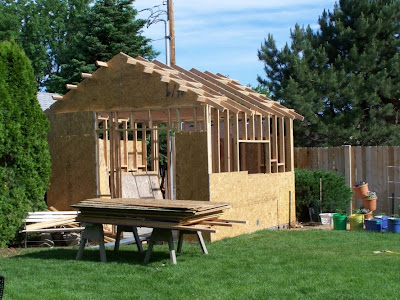 Today it's time to get back to work. 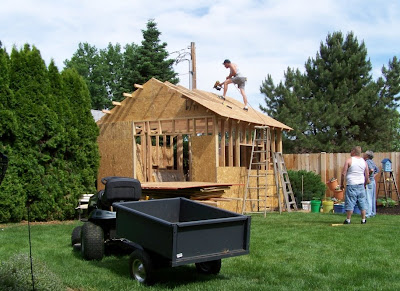 John and Scott work on the roof. That's the garden cart Mr. H bought me for Mother's Day! It certainly has come in handy for hauling lumber and tools to the back yard. 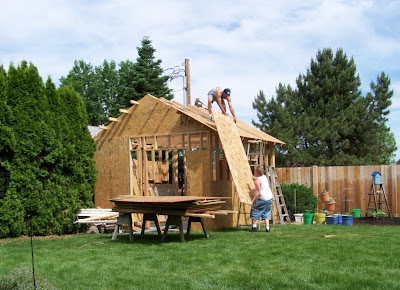 At least we bought new 4'x8' sheets of OSB for the roof. We kind of messed up John's original plans by using the free OSB, as it came in sheets that were only 6' long and under four feet wide. He really has to work at patching them in, but it will all be covered by siding in the end. 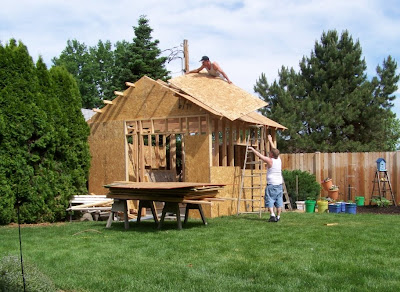 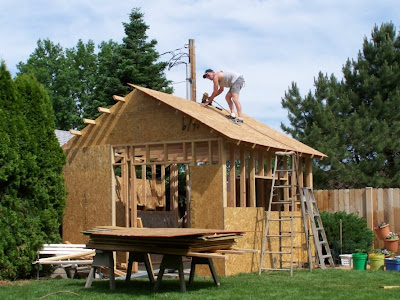 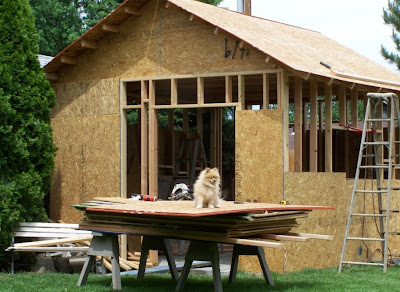 So while the boys built, I did a few chores in the garden. I noticed the bush beans were growing over my raspberries, so I pounded in a couple of stakes and wove some twine to make a makeshift trellis to hold them back. Then I wrapped the twine around the raspberry supports for the morning glory to climb. Something has been eating the morning glory, it may never get strong enough to climb the twine. 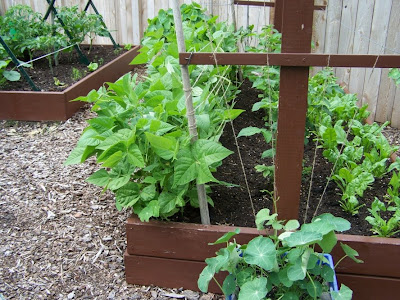 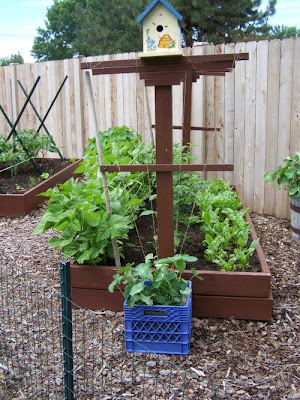 The morning glory has twine to climb if it ever decides to actually grow. I wonder if I can get John to help me straighten those posts. I tried installing them by myself, and I couldn't hold them plumb and drive the screws at the same time. Things like crooked posts really annoy me! 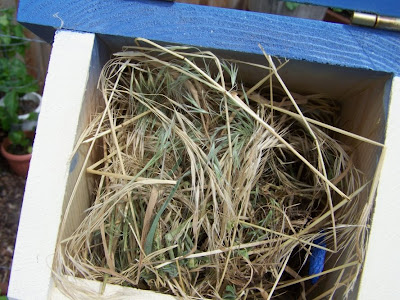 While I was putting in the stakes, Mama Sparrow came flying out of the birdhouse. Knowing she wasn't in there, I opened the roof (I made them with hinges) and took a photo of the inside. Sparrows build deep (tall) nests and burrow into them, so I couldn't see if there were eggs or babies present. 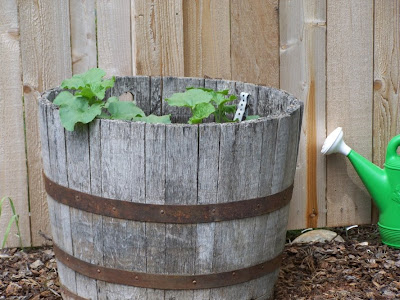 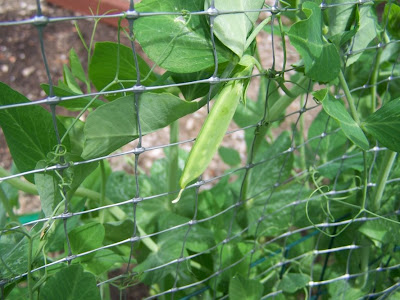 I have a pea! This is Super Sugar Snap, and there are a few pods growing now that the plants are better protected from the birds. 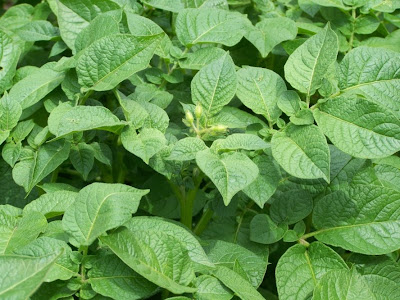 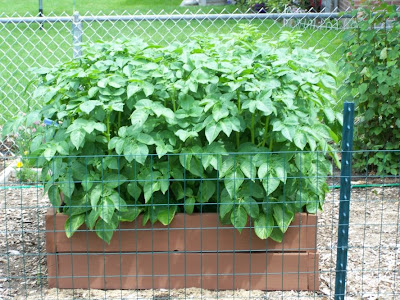 The potatoes just keep growing. The Yukon Gold, which were slow to start, have now caught up and surpassed the others in growth. The plants are nearly three feet tall now. I hope they aren't all leaf and no potatoes!

I picked 14 ounces of the loveliest spinach! It was more like early spring, baby spinach than almost-ready-to-bolt summer spinach. Not a sign of leaf miners in it, either. I did have to pull two plants that had bolted, but I've been more than happy with my spinach crop this year. I also pulled 10 ounces of sweet green onions, so tonight we'll have a Wilted Spinach Salad for dinner. 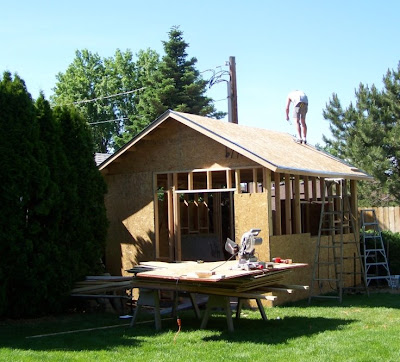 The drip edge and fascia boards have been installed. I wonder why I never had this kid build me a house! Hmmm...we've been wanting an addition. 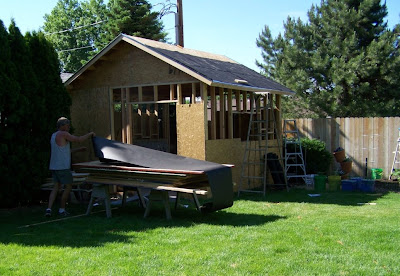 The roofing felt goes on. John built a roller to feed the roofing felt onto a 4'x8' sheet of OSB, then cut it into 8' sections that he could manage by himself. There was a bit of waste in the overlap, but it was much easier on my worker. 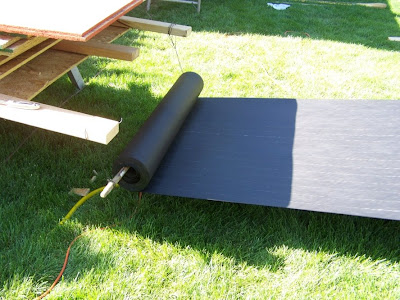 A closeup of the roller....a broom handle, two pieces of heavy wire, two 2x4s and a sheet of OSB on sawhorses. Simple but effective. 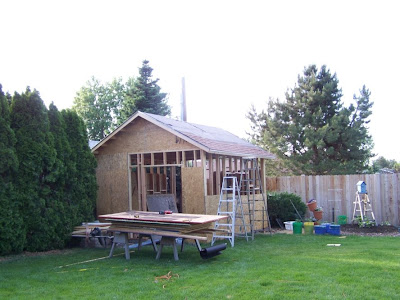 The end of another day.