I just realized I forgot to title yesterday's post. I had a lot of photos of the mid-June garden, so I'm breaking it down into two posts, yesterday was part one. 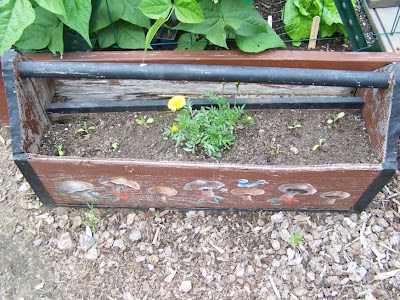 Isn't this a pitiful way to begin today's blog? This old tool tote was supposed to be overflowing with blue bachelor buttons. I planted the seeds quite some time ago, and they germinated quickly. Then they began disappearing, so I covered them with bird netting. Within two days, every tiny seedling had disappeared, so it had to be slugs, earwigs or pill bugs. Wanting to get a head start on another batch of buttons, I pre-germinated some seeds in a wet coffee filter, placed in a plastic bag. It took just one day for them to sprout, so I carefully placed them in the tool tote, as well as elsewhere in the garden. Not a single green leaf broke the surface. Not even one! Undaunted, I planted the remainder of the packet, ten seeds, in soil blocks. There was quick germination and growth, so eight seedlings were planted in the tote, the other two in the flower bed at the back of the garden. This is their final chance before I give up on them. 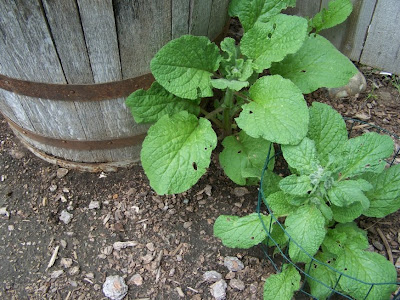 If I don't get blue bachelor buttons, I'll still get blue in the garden with the volunteer borage. It came up everywhere in and around the kennel garden this spring, so I let several of them grow. They get really large, so I have to be careful where they are planted. The bees love them, as do the unknown insects that have chosen to make lace of many of the flower leaves this spring. I don't expect the bugs to eat this sturdy plant to the ground. 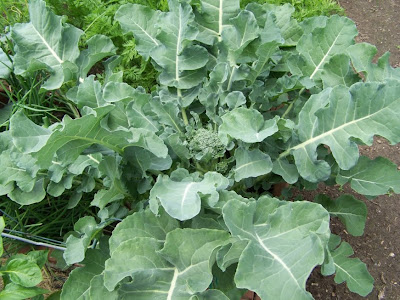 This broccoli, in the raised bed, is so pretty it should be in the flower garden. It's developing a nice head, too. This is my one and only De Cicco broccoli, the last from seed sent to my by EG (Our Engineered Garden) a couple of years ago. 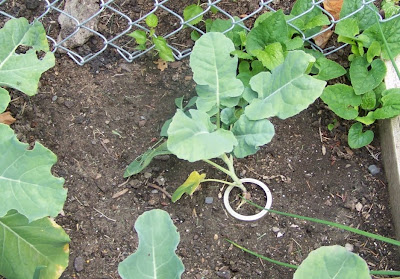 This tiny Waltham broccoli was featured in last month's Garden Blogger's Death Day. It was looking terminal, but since I used Sluggo on the garden, it has no longer been under attack and may survive. I'll give it a second chance. You may be wondering why there is a jar ring around the stem. That was my experiment this year, to see if my old jar rings could work as cutworm collars. Evidently they did, as I didn't lose any plants.


While the broccoli and cabbages in the previous photo were heavily damaged by slugs, the other half of the very same bed was relatively untouched.


There were a few bites from the broccoli leaves, but the cabbages are gorgeous. 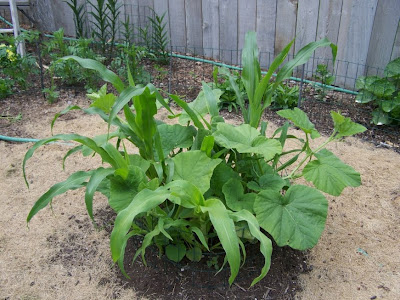 My "two sisters" are growing well, they just need a bit of warm weather to get them going strong. The four corn stalks interplanted with this Waltham butternut squash were some I had thinned out of the corn barrels, and couldn't bear to toss into the compost. The third sister won't be planted with them. 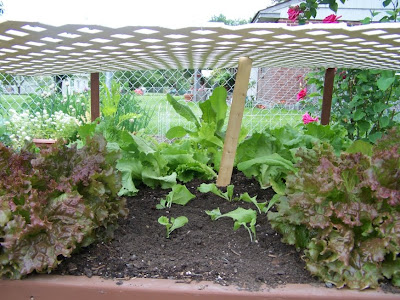 The lettuce is doing well under its shade structure. I added several new seedlings of Red Sails to this bed this week, and there are a couple of new Jericho plants on the other side. 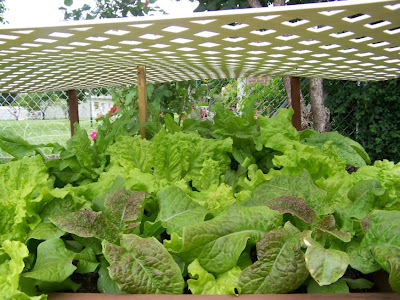 This bed of Drunken Woman, Australian Yellow, Bronze Arrow (which isn't very bronze), Cracoviensis and possibly other lettuces, is in dire need of harvesting. I think I'll treat this as a cut and come again bed, while harvesting entire plants from the other two beds. 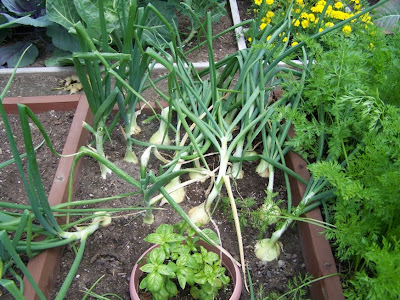 I was hoping the onions would get larger before they needed to be harvested, but I'm going to have to start pulling and curing them because they are falling over. I think a lot is from our recent strong winds, but I'll pull the floppy ones anyway. This bed has the smaller onions, that were planted quite closely. 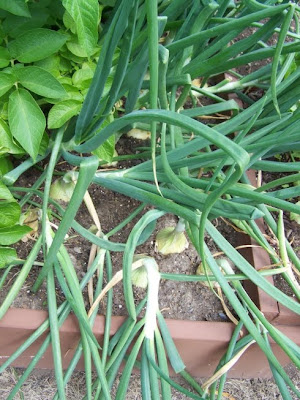 Some of these larger onions are getting pulled, too. They are a nice size, if not quite as big as I'd wished they'd be. 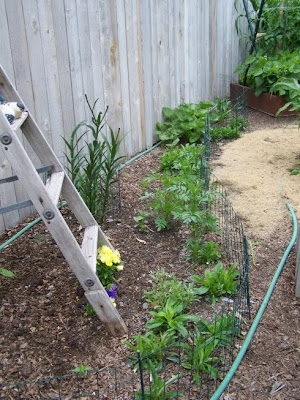 The north bed flower garden isn't flowering much. The lilies are finished, but the two pansies I uprooted and brought back from Arizona are finally beginning to grow again. The morning glories (not visible) are so slow! The ones I direct seeded under the ladder are only about 4" tall right now, and not yet beginning to vine. The ones I started in soil blocks in the house, weeks later than the direct seeded ones, have already climbed a foot up their twine trellis. Nearly everything in this bed has been chewed half to death by insects (I suspect earwigs). Only two zinnias, from an entire packet, survived the bugs. All of the snapdragons and bachelor buttons were consumed. 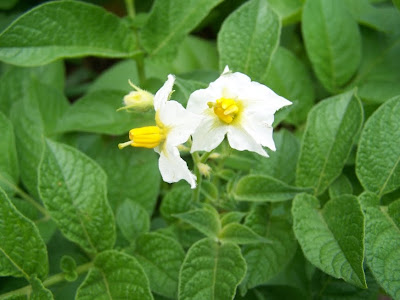 I've been reaching for potatoes under the plants, and the Kennebec seem to be producing more quickly than the Red Norland, even though the Norlands are supposed to be earlier. None of the Norlands have blossoms, some of the Kennebecs do. 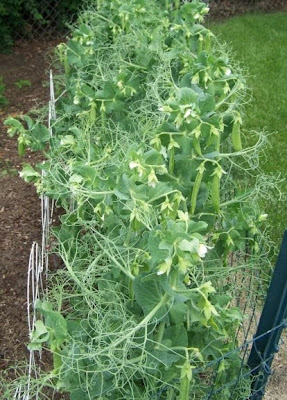 I need recipes for using sugar snap peas! They're coming on faster than we can eat them now. The next picking will have to be frozen. 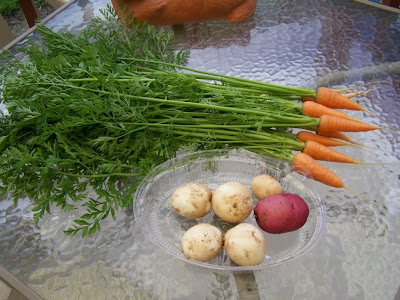 Grandson Kevin came for dinner on Wednesday. He actually came for his good grade pay, and stayed for dinner. I give the grandchildren $10 for every "A" they bring home on their report cards, and Kevin has broken the bank this year. He's managed to get five "A"s each quarter, and earned $200 for the year! Kevin loves vegetables, especially fresh vegetables from Granny's garden. We went out and pulled enough potatoes for our dinner from under the plants, and a bunch of fresh carrots. After taking this photo, Kevin and I decided we needed more carrots for dinner, so I pulled another bunch of them. We had sirloin tips in gravy (using garden onions), steamed new potatoes, broccoli that was picked the day before, buttered carrots and a large salad of fresh garden lettuce for dinner. 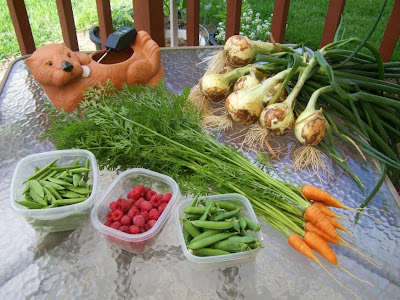 Yesterday I pulled five pounds of the flopped over onions. I'll be reweighing them after the tops have dried and been removed. The snap peas will be frozen, but we've already eaten the rest of the food shown plus the entire head of Anuenue lettuce shown in yesterday's garden photos. 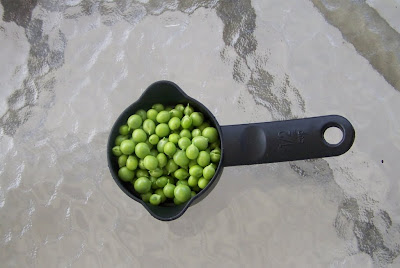 The first picking of Little Marvel peas gave us 1/2 cupful once they were shelled. 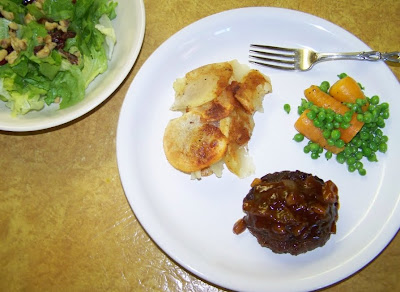 The new potatoes were sliced and fried, the peas and carrots made a lovely pair, and the onions were delicious in the barbecue sauced hamburger patties. Anuenue lettuce gets a real thumbs up. It was crisp and sweet, and Mr. Granny's favorite so far. I had my salad with craisins and walnuts, with a vinegar/oil/sugar dressing, Mr. Granny had his plain with ranch dressing. We ate the fresh raspberries for dessert.


I'll end today's blog with a couple of pretty pictures. 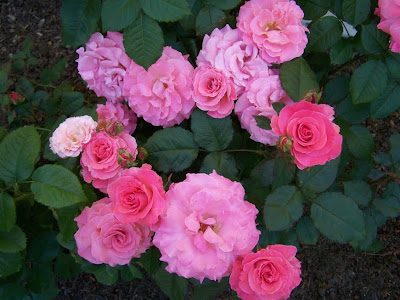 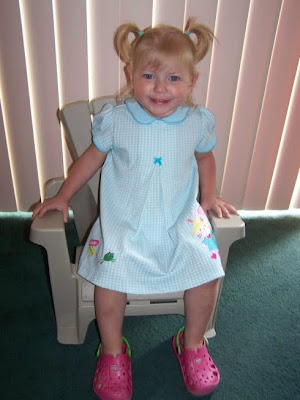