Jenny, from Simple Garden Made Easy, was sweet enough to send me some strawberry plants, both Cabot (June bearer) and Alpine. I do hope they survive, as the Post Office managed to completely mangle the heavy Priority Mail box in which they were packed. Both ends of it had been completely ripped open, allowing the soil to escape from around the roots of the plants. I soaked them well and planted them immediately, now I'm keeping my fingers crossed. 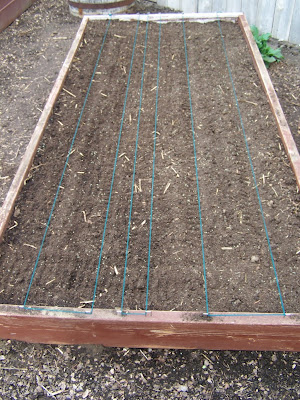 I finished cleaning up and amending the soil in the old 4'x8' strawberry bed, and planted two 6' rows of spinach, one 6' row of beets, and three 6' rows of carrots lengthwise down the center of the bed. On each end I put in two rows of radishes, which are way too many considering I have radishes coming up elsewhere in the garden.
I had planned on demolishing all three of the old half-barrels in the garden, as they were rotting and falling apart. The first one was done, but barrel #2, being in better condition than expected, was moved to the center of the garden to be the future home of the butternut squash. I think I explained, in an earlier post, that there is the remaining base of the old maple tree stump and some huge surface roots in that area, which make it impossible to garden. A perfect place for a deep container and room for vines to sprawl all around! It's still three weeks too early to plant the squash seeds there, but I figured what the heck. It's only six seeds, and I probably have a lifetime supply left, so I went ahead and planted them. I covered them with a layer of row cover, and then started some more seeds in the house.......just in case. In fact, if they all grow, I can probably find some plantable pockets of soil around the outside of the barrel and have a double amount of butternut squash plants. Have I mentioned how we love butternut squash? Can't have too many! 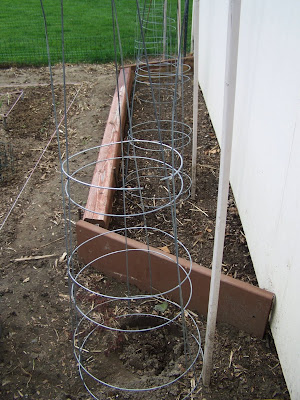 I pulled the tomato buckets from next to the shed and cleaned out that bed. I think I'll plant the tomatoes directly in the ground there this year, so I need to haul in more big buckets of compost and get the bed prepared. I'll be putting four indeterminate cherry tomatoes there next month. I'll be keeping my fingers crossed that the plants don't develop fusarium wilt, which has been a real problem in this soil. I'll also need to replan my sprinkling pattern so the bed next to it will get overhead sprinkling, but this strip will get drip watering. I may also remove the wood surrounding the bed to allow the sun to better warm the soil there. 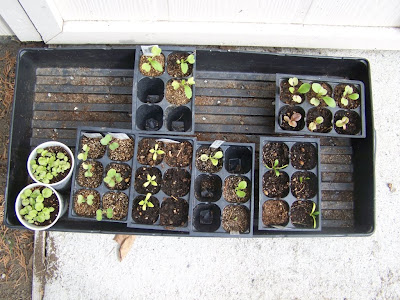 I planted a few more tiny lettuce seedlings in The Thing. They were some I'd started in the potting mix that is producing nothing but stunted seedlings. I also planted out the eleven stunted dwarf cabbages, three of the stunted broccoli and three of the stunted Chinese cabbages. I still have at least a half flat of stunted seedlings that will be planted out this week. I've started more seedlings to replace the cabbage and broccoli if necessary, and these one week old seedlings have nearly caught up with those that were started a month ago. 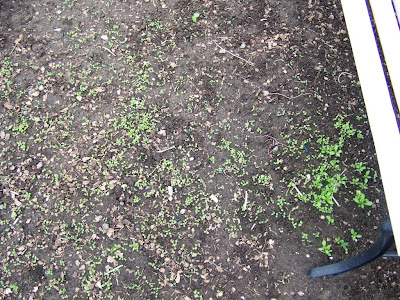 I've never had much of a problem with weeds in my garden. I'm quite diligent about using the hoe for a few minutes every day or two and not letting the weeds get ahead of me. This year it's going to be a battle to keep the volunteer sunflowers, giant cosmos and alyssum (in photo above) hoed down! I (stupidly) left the sunflower heads on the ground for the birds and squirrels to enjoy through the winter. Mammoth sunflowers are popping up everywhere! I do not want mammoth sunflowers. I'm still trying to dig out the tree trunk sized stems and roots from last year's mammoth sunflowers. Same with the forest of cosmos that grew 10' tall and overtook the entire bed behind the shed. At least they were shallow rooted and easy to pull, and hardly any flowers bloomed on them, so there weren't a lot to go to seed. The alyssum will be allowed to grow in some areas, but there are millions of tiny plants growing among the onions and potatoes that will have to be hand pulled eventually.

Inside, the seedlings are growing beautifully. Yesterday it was warm (70F) and overcast, so everything got carried outside to the back yard to spend the entire day, then brought in at dinnertime for a good watering before being put back on the grow shelves.

I put the four large tomato plants on the front porch, where it was even warmer but maybe a bit breezy for them. I noticed the biggest one was suffering some sunburn on the leaves when I brought it in. It also looks like it needs a dose of fertilizer. I really need to tip it out of the pot to see if it might be getting root bound, it's getting so large. 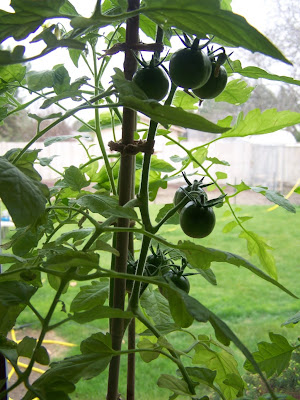 I have over a dozen tomatoes on the plants, but nothing getting ripe yet. Maybe a few more days on the sunny porch will help ripen them. 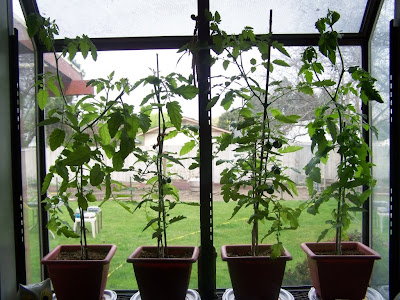 They actually got so tall they wouldn't fit in the window, so I had to clip off their tops last week. 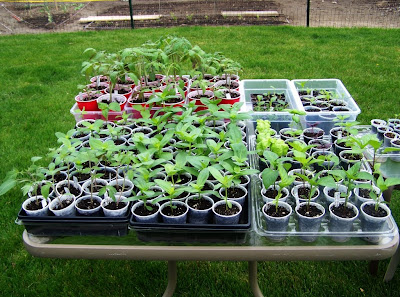 Today it's overcast again, so the seedlings are back outside. It's supposed to get up to 75F later in the day, so I'll have to make sure the tables get moved back onto the patio and out of the strong sunlight when and if it happens. 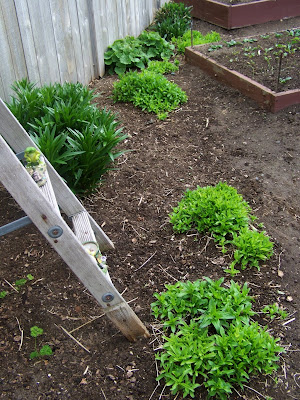 The perennial bed is really growing well this spring. 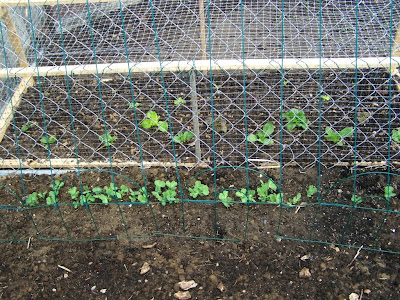 Sugar snap peas are growing in front of The Thing, which is filled with lettuce seedlings of various sizes and varieties. 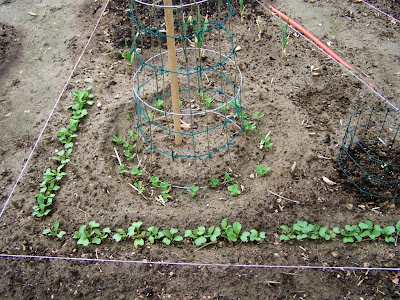 Shelling peas growing in the triangle garden, with radishes around the edges. A tiny broccoli plant struggles to survive. 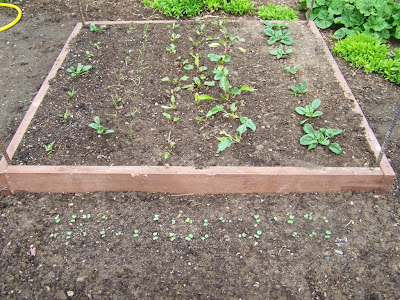 The seedlings I planted earlier aren't doing much. I have a feeling the ones I direct seeded yesterday will probably overtake them. If you look closely you can see the turnips popping up in the foreground, germination looks to be quite good on them, I see maybe two or three that didn't germinate, so I'll stick in a couple more seeds today. 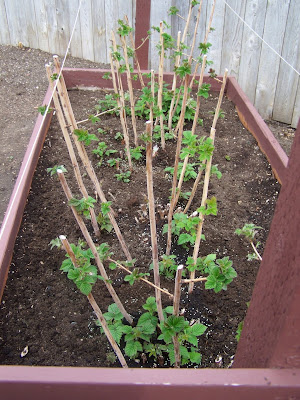 Yesterday I got the raspberry bed amended with more compost. It's ready to grow!