It's time to get the bottomless tomato buckets ready for the season. 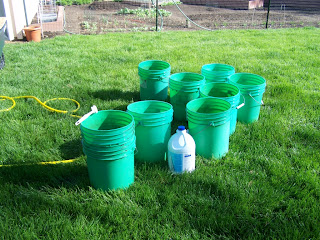 First I hosed them all out to remove the loose dirt.  Then I filled a non-bottomless bucket with water, and added about 1/2 cup of chlorine bleach.  That's probably at least double the bleach is really needed, but I always tend to overdo things. 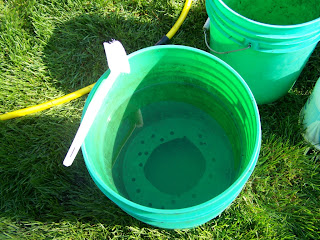 Then I submerged each bottomless bucket into the bleach water, and used a long handled brush to clean around the top where the water didn't reach.  I left the bottomless bucket in the bleach solution for about five minutes, then removed it and let it sit in the sun to dry while I soaked and scrubbed the next one. 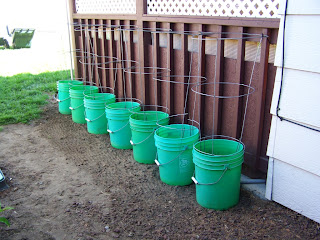 I lined the buckets up on the west side of the patio.  A heavy duty tomato cage was inserted into each bucket.  Usually I run the long wires at the base through holes drilled around the edge of the bucket bottom, down into the soil.  However, these buckets are sitting on lava rock, so I had to bend the wires and just fit them down inside the buckets.  Each cage was secured to a picket with heavy nylon cable ties, and then smaller zip ties were used to attach each cage to the one next to it.  A hurricane couldn't tip them over now!  I'm planting some compact growing tomato plants in these, so I placed them as close together as I could. 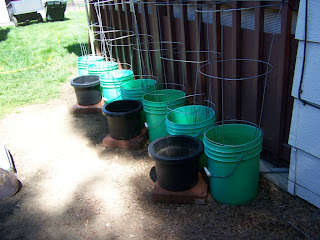 There was still plenty of room to walk through here, so I decided I could add three pots for hot peppers, too.  I don't like to put the hot peppers out in the garden, as it's too fertile and they get too much water.  They always end up being sweet rather than hot.  Everything down this "tomato alley" has to be hand watered, so I can control the amount of moisture the peppers receive. 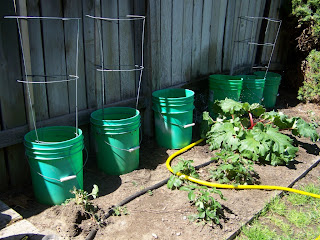 Another six tomatoes can go here, against the fence.  I'll put the taller growing plants there, as they can be tied to the 1"x2" vertical posts.  The cages go down into the soil in this bed, and are attached to the posts with cable ties.  Just three more and the green buckets will all be ready to fill with potting soil.  I was just finishing up when son John came to help me with another project.

Don't forget to read about it in my earlier post #1 for today!