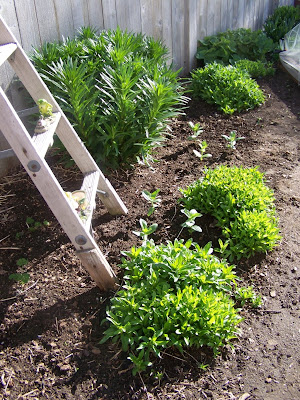 My favorite part of the vegetable garden contains no vegetables! It has lilies, Sweet Williams, hollyhocks, Shasta daisies, purple cone flowers and zinnias. I did stick a couple of parsley plants under the ladder. 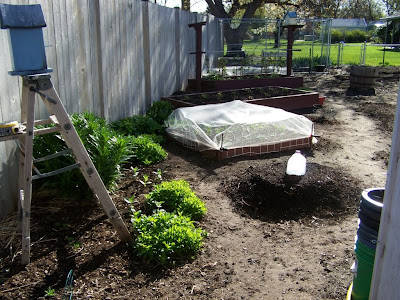 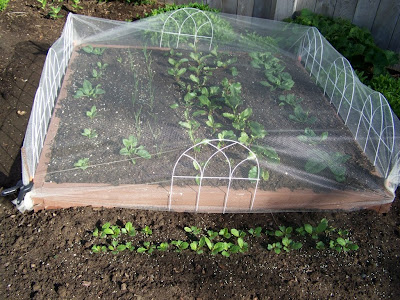 Spinach, beets and onions are under cover. I wasn't expecting leaf miners this early, but found eggs on the spinach so the cover went on too late. I'll have to be extra diligent in looking for the damage and removing the leaves before the entire bed gets infested. The turnips are growing well in front of the bed. 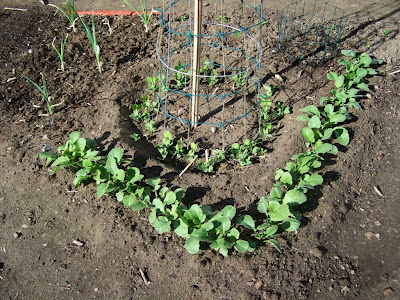 It won't be long before we're eating radishes. Both triangle beds have about an equal amount of them growing, planted two weeks apart. Peas will be climbing their tepee soon. Garlic is still showing the effects of transplanting, but I think all but one or two will soon show full recovery. 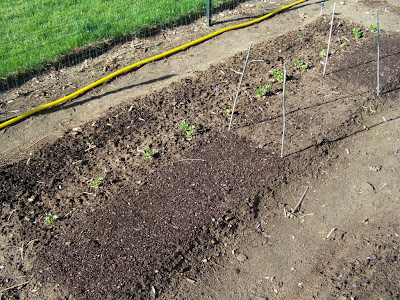 The earlier leaves of the celery suffered through the cold weather and had to be clipped off, but new growth is finally showing. The two darker areas of soil in the foreground are planted with carrots that are just now emerging. The center section is being reserved for a later planting. On the other side of the celery, nearer the fence, are several dwarf cabbages. The seedlings are still small, but look like they will survive. They were part of the flat of seedlings grown in the poor potting mix, and I do have backup seedlings that are growing larger and stronger. I'll manage to find room for all. 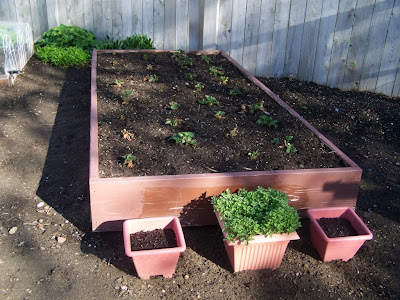 Strawberries aren't looking so happy about being transplanted. They looked better last week, but the leaves are suffering a lot of die back. The oregano in the pot is loving its new place in the sun. It was in a shadier area in the flower bed last year. Soon it will be joined by basil in the other two containers. 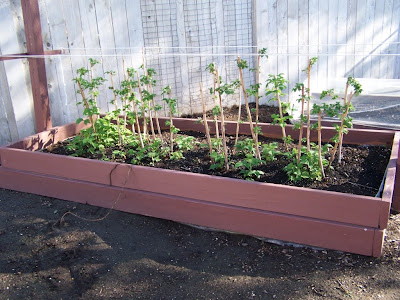 The raspberries are really beginning to green up, and I'll have to get out there soon to begin cutting out excess suckers or it will quickly become a jungle of plants. You can see the wire fencing I attached to the back fence for the pole beans. That is one of three sections I will plant in Fortex beans, and I might just plant it today. I normally don't plant them until April 25, but the weather man says it's going to be nice and warm all week. 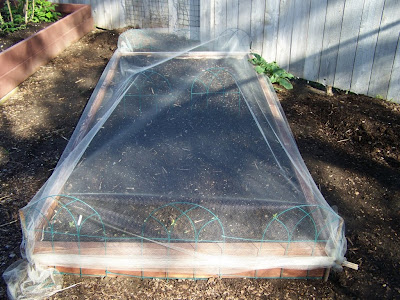 The new bed of spinach, beets, carrots and radishes got its leaf miner cover on before germination had even taken place. I'm not taking any chances on this one! I noticed the radishes were already up, so it looks like we'll have a real glut of them this spring. 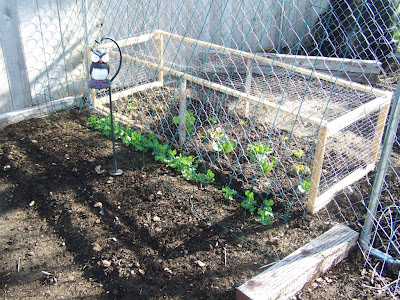 Sugar snap peas are almost ready to begin their climb up the strings and onto the chain link. In the foreground are the new strawberry plants from Jenny....not showing any green yet :-( 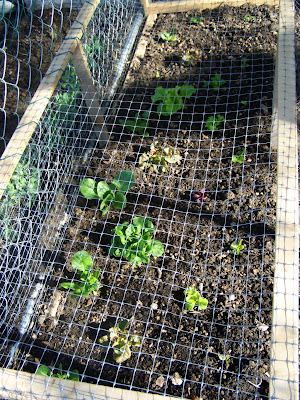 Lettuces are coming along nicely, protected from birds, in The Thing. 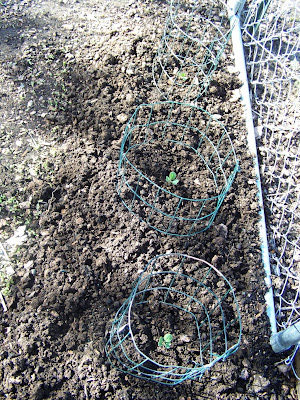 I'm keeping my fingers crossed that the Brussels sprouts survive. They are also some of the earlier stunted seedlings. They weren't growing at all in the flat, so I figured they had a better chance of survival in the garden. 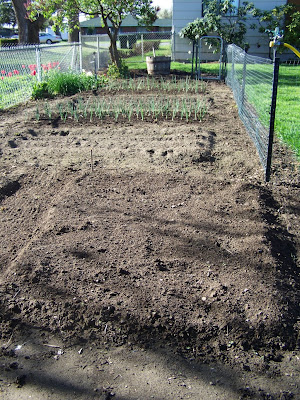 That's one of the future corn beds in the foreground, looking back at the rows of potatoes and onions. The barrel is on the outside of the garden fence, and will be the one that will hold the Honey Bear squash. Zinnias will also be planted nearby. 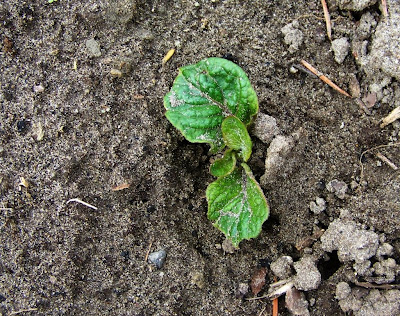 The potatoes are beginning to emerge. Yesterday there was one, today there are three. Hope springs eternal! 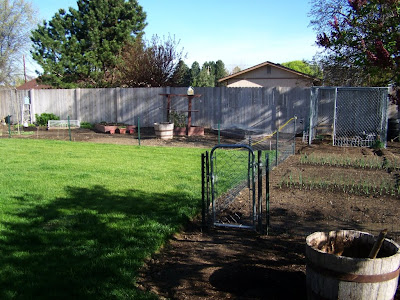 A view of the entire garden, except for the area behind the garden shed. In the foreground is where I'm working on a new flower garden. I'm trying to incorporate more flowers near the vegetables this year. 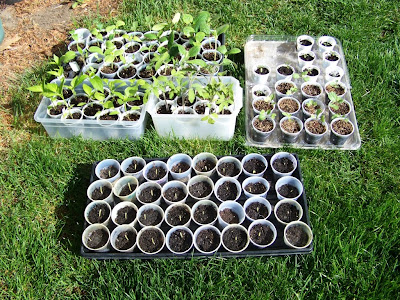 Young seedlings out for fresh air and sunshine include corn, peppers, squash, cucumbers and melons. 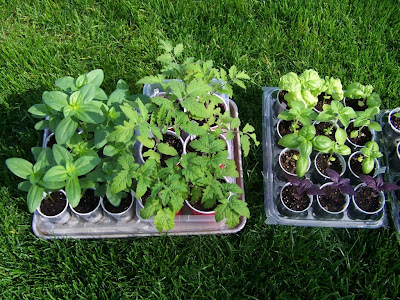 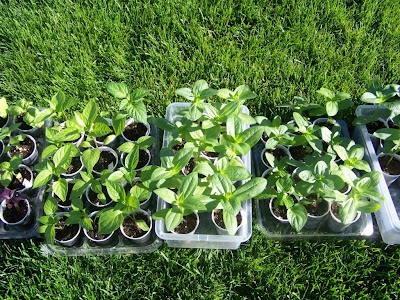 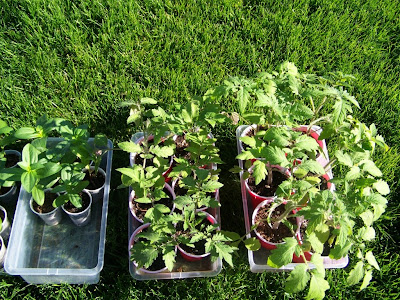 and more zinnias and tomatoes. 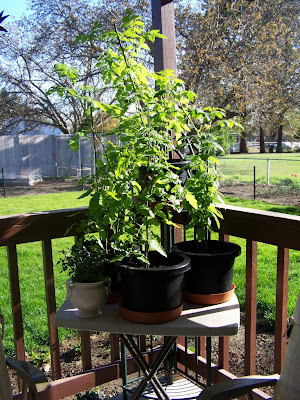 The tomato jungle. Last night I counted 27 tomatoes on the plants, but still no ripe ones.