Son John came over this afternoon to help me with a little project.  I'm always laying a hoe, rake or shovel against the top of my plastic mesh fencing, and I was afraid I'd eventually tear it or stretch it out, and I needed something that would support a cucumber vine if I decided to grow one against the fence.  I also needed to replace the garden twine in the raspberry bed with something stronger.  John does this really handy thing, using his electric drill and wire.  We used electric fence wire, which doesn't rust, but you could use baling wire if you wished to. 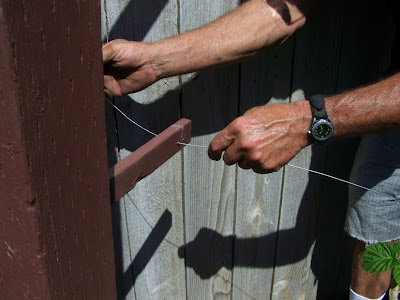 I'm showing the instructions as done on the raspberries, but the same procedure is done on a fence post by making the loop around the top of the end post.  Here John ran one end of the wire through a  single drilled hole at the starting point, then through a hole (or around the end fence post) at the other end. 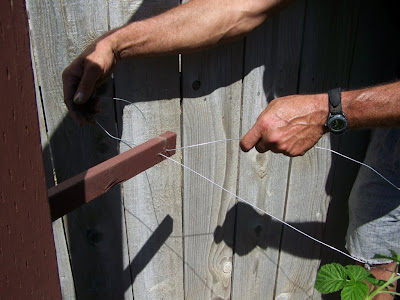 Then he looped it and ran it through the hole next to the first one (or around the end fence post). 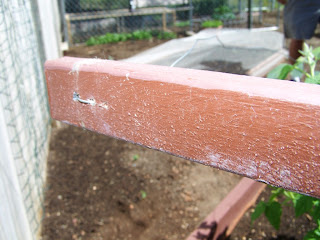 Make sure your loop is tight in the back. 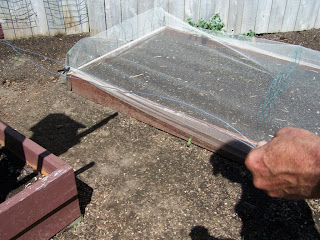 Pull the wire through, all the way back to the starting point,  until you have a double strand.  Add at least 2-3 extra feet to the length to account for the twisting, which will shorten the wire considerably. 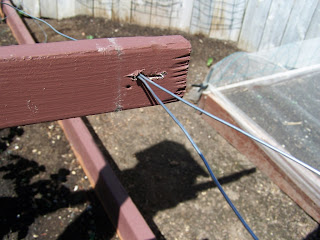 Push the ends of the wire through a single hole at the starting point. 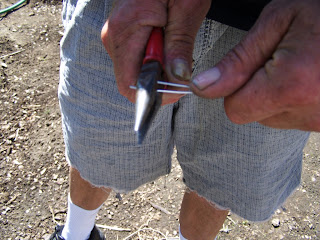 Clip the ends of the wire even. 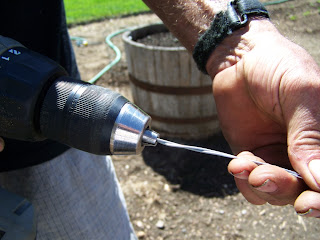 Insert the ends into a drill and tighten the chuck until the wires are held firmly. 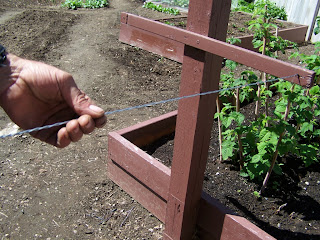 Turn on the drill, slowly, and the wire will begin twisting.  Continue twisting until the entire length is neatly twisted together.  Carefully and slowly release the wire from the drill, as it can sometimes recoil. 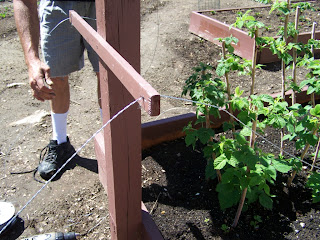 If you're doing raspberries, as we were, let this wire hang loose until all four are finished, then attach them one at a time to keep the tension correct on all four.  If we had turnbuckles, it would have made the job simpler. 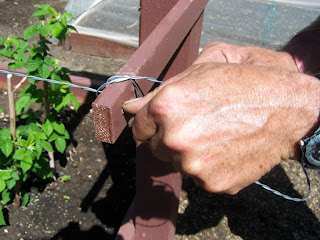 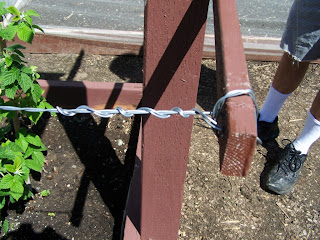 Then loop it back around itself, making sure you have the ends tucked in so as not to scratch yourself on them. 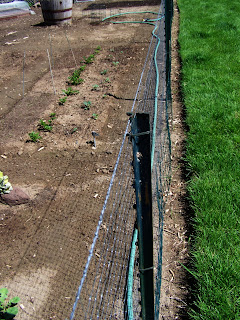 After the raspberry wires were done, we made an 80-foot twisted wire and wove it back and forth through the top of the plastic mesh fencing, attaching it at each T-post.  Now I won't be sagging the fence fabric down with my garden tools.