I'm leaving for a short holiday tomorrow. I'll only be gone three or four days, but I'm already worrying about my seedlings. I'm wondering if I should have my granddaughter, who will be dog sitting, turn the lights on and off and risk drying out the plants, or leave the lights off for 3-4 days and be assured they won't dry out with just the natural light in the room (very little). I don't think having her water them would be an option, as it requires packing them all into the kitchen and removing each one from its carrying container, then watering them in the kitchen sink and letting them drain before returning them to their carrying containers and back to the shelves. I suppose I could just have her spritz them with the spray bottle, which would be of some benefit over letting them dry out, but I think the 3-4 days of no artificial lights might just be my best option.
Speaking of those seedlings......I have been out in the garden, digging, hauling, hoeing, building and planting for many days this late winter/early spring, and my old body has held up pretty well. I haven't suffered from very many aches and pains through it all. But yesterday I spent a few hours standing at the kitchen sink, up-potting a bunch of zinnias and some veggies, and the burning pain between my shoulder blades was relentless! I had to take Tylenol every four hours just to make it through the day!
The zinnias had grown so quickly in their soil blocks made of "the potting mix that shall not be named", that their roots had grown inches out of the blocks! Normally I don't have a problem with that happening, as the roots usually air prune. Not these. I ended up potting each one into a 5-oz. plastic cup, and I'm keeping my fingers crossed that will hold them for another four weeks. I really do not want to have to up-pot them into the 16 oz. cups, there are way too many. 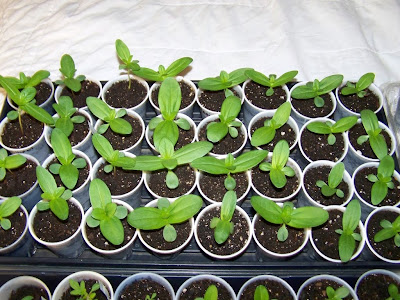 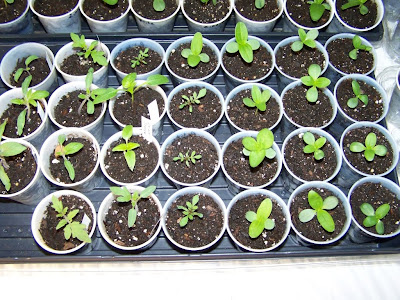 More zinnias, and a few of the later planted tomatoes, peppers and my four (count 'em) marigolds. Marigolds have been replanted, but these were old seeds so may no longer be viable. If I don't have marigolds growing by the weekend, new seeds will be purchased and planted. 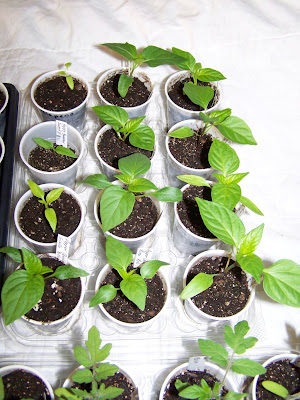 A dozen peppers in various stages of growth. 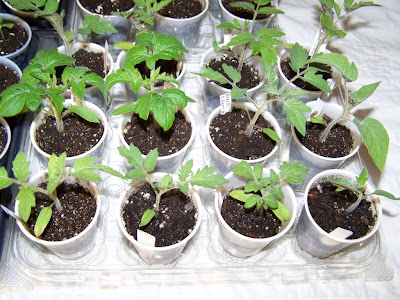 A dozen of the medium sized tomato plants. With 4-5 weeks left until planting time, I wish they were all this size. 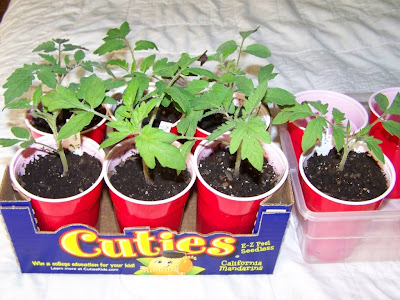 Seven of the tomatoes had to be up-potted to the 16 oz. cups already.
And that was the end of the day's up-potting. 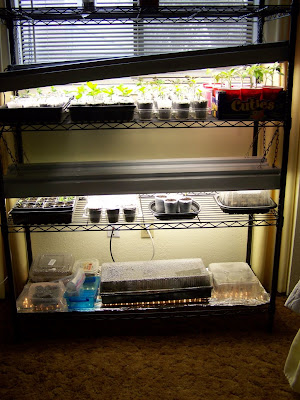 Seedlings in various stages of growth. This flat of seedlings isn't showing much growth. They were planted in a different potting mix and fertilized with fish emulsion, but they are all laggers. I planted more seeds of the broccoli and cabbages yesterday, using "the potting mix that shall not be named", and I have a feeling they will soon surpass this bunch in growth.