Now we'll venture into the jungle.  I had to chop off some squash and melon vines yesterday, just to give myself a path through the North Garden. 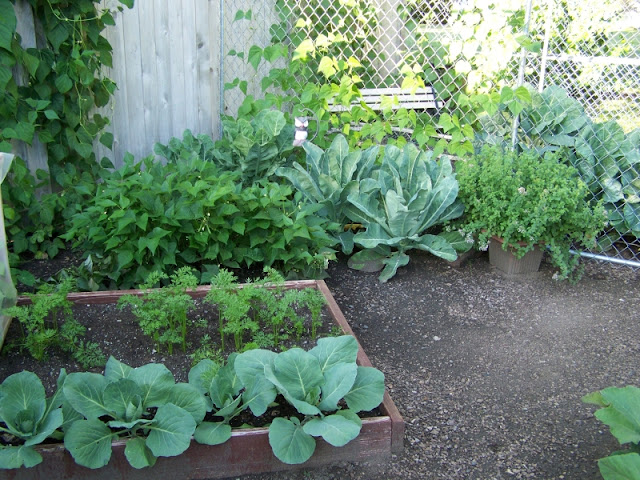 In this corner, the latest planting of Fortex pole beans has begun their ascent up the chain link of the Kennel Garden.  In front of them, not visible, are some celery plants that were planted much later than the first ones.  The earlier ones just grew a bit and went to seed, so I'm hoping a later planting might be more successful.  In front of the celery are the cauliflower that never flowered.  I decided to just leave it, and lo and behold, I think I see a small head forming in one of them!  Even if they do nothing, they're pretty.  They can stay.  To the right of the cauliflower is a pot of oregano.  In the center is a triangle of Gourmet Green French bush beans.  I've begun picking them, but they aren't nearly as productive as the ones I planted in late April.  I guess they don't like this hot weather.  A few carrots remain in the raised bed, along with some pretty little Gonzalez cabbages.  Fortex pole beans are also on the cedar fence to the left. 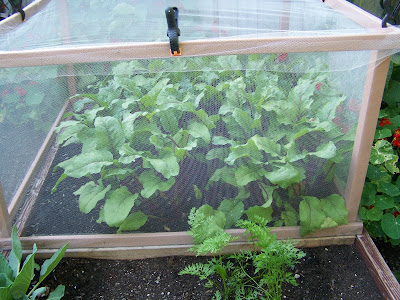 On the other end of the raised bed are my Red Ace beets, under protection from leaf miners.  I pulled a half dozen sweet baby beets last week. 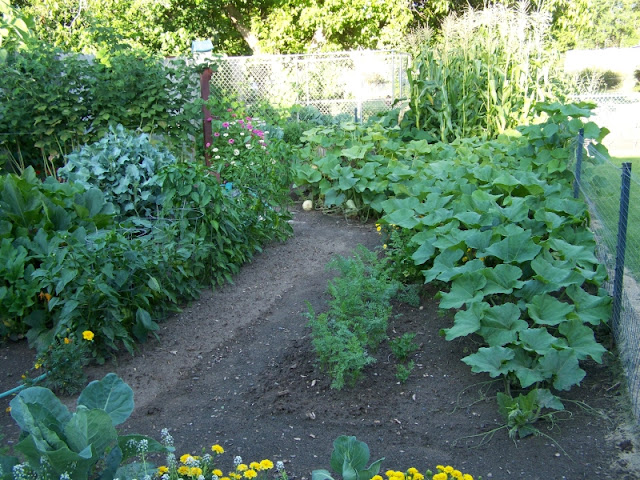 Looking back toward the Kennel Garden, you can see how the Waltham Butternut squash vines are taking over.  This is where I had to lop off some vines so I could get from one side of the garden to the other.  They've grown through the corn and were heading down through the East Garden, so I had to take the shovel and head them off at the pass!  To the left are my raspberry bed, a row of sweet peppers, a couple of broccoli plants, Honey Bear acorn squash and the strawberry bed (hiding behind Honey Bear and broccoli).  A few carrots remain in the center.  This is where I had the nematode problem with the earlier carrots, but these, a later planting, seem fine....so far!  The first planting of Honey Select corn is just about finished, but the later Silver Queen is just beginning to form ears. 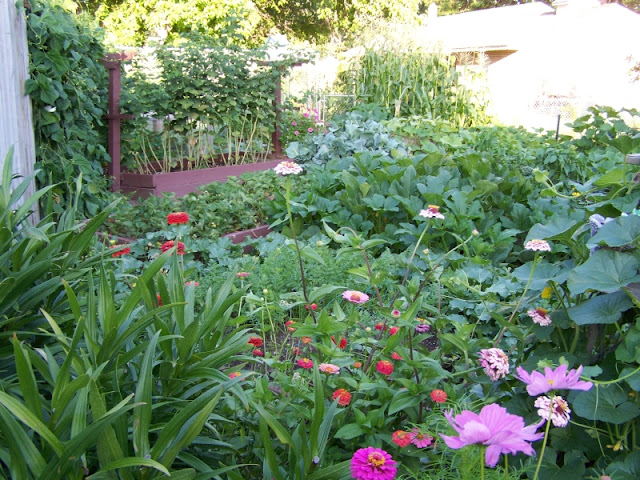 From this angle you can see the raised bed of raspberries, and the other raised bed of strawberries. More Fortex pole beans grow up the cedar fence.  Cantaloupe vines are everywhere, so between the melon vines, the squash and the flowers, it's real difficult reaching the third raised bed, filled with carrots, that's right in the center of the picture.  Yes, I know you can't see it.  I told you I had a jungle out there! 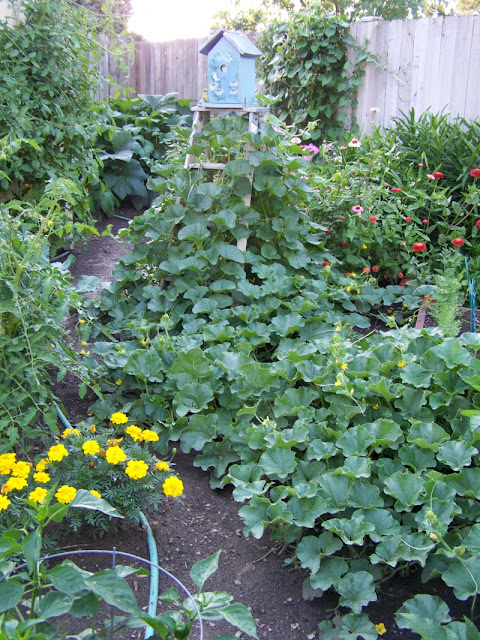 Cantaloupe vines cover the ladder and sprawl all over the ground below.  Morning glories grow on the fence and zucchini and yellow squash fill the entire area behind the shed. 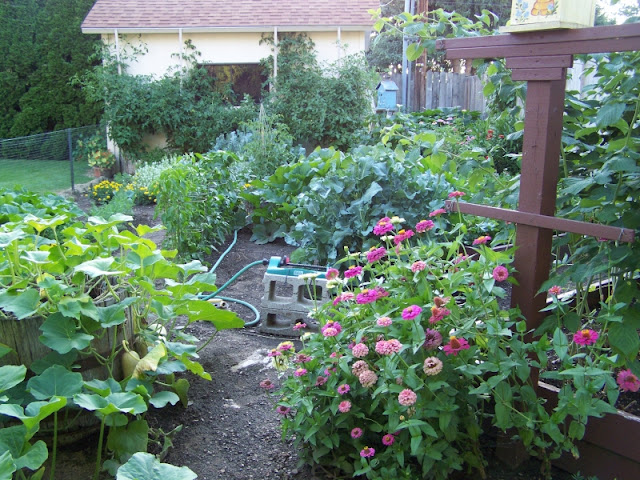 Standing back by the raspberries and looking west. 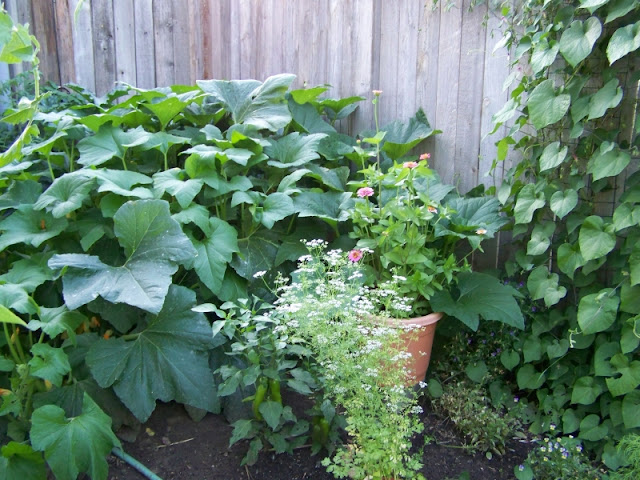 A pot of cilantro is flowering for the bees, and a pot of zinnias adds a bit of color to this end of the garden.  A couple of Happy Yummy Sweet peppers are in the center. 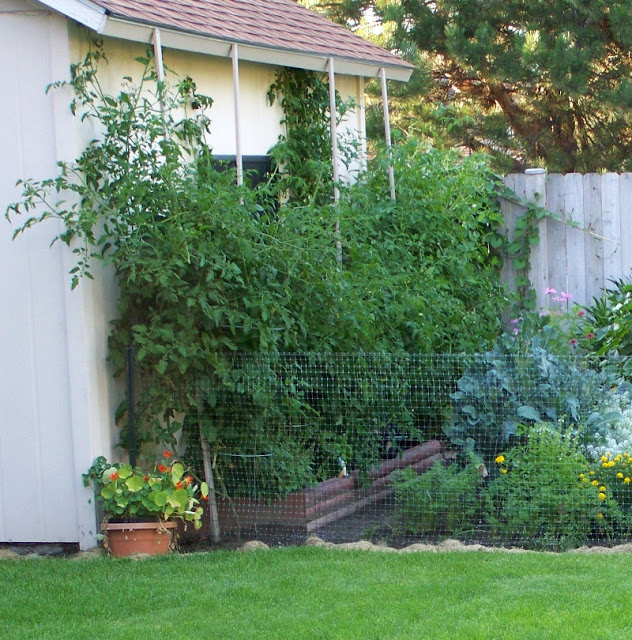 The tomatoes have just gone wild here.  I have them caged, staked, zip tied and roped, and I still have to go out with the shears every once in a while, just to keep a path open for picking.  I don't know where that one is heading up under the eaves.  I'll probably have to get out a ladder and lop it off. 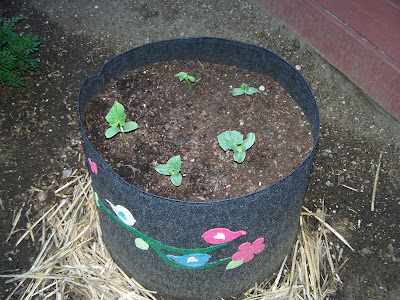 I planted my grow pot with bush cucumbers.  Of course they all sprouted, so now I'll have to bite the bullet and pull out two or three seedlings. 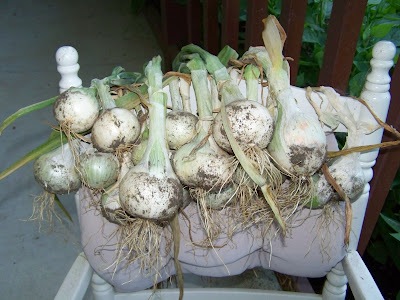 I pulled the storage onions last week, and have them drying on the patio.  It's certainly not the big harvest I got from the Walla Walla Sweets, but better than I thought I'd get. 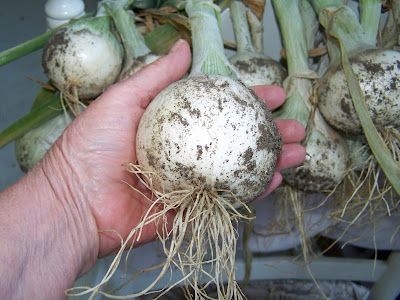 They sized up better than I expected. 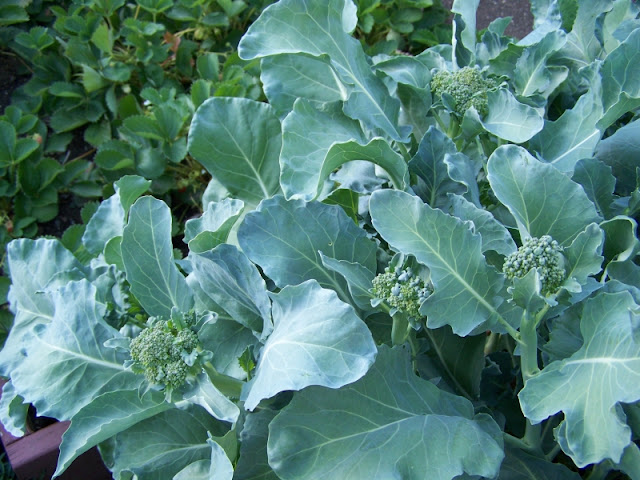 Just look at those broccoli side shoots!  This plant and one other are covered with them.  Wouldn't you know they are from a packet of mixed seed, so I have no idea what variety they are.  I sure would like to know, so I could plant them exclusively in the future! 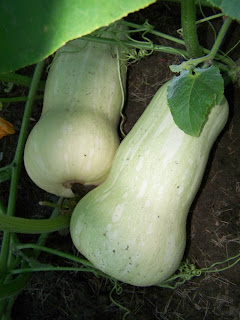 These babies are huge.  Some of the largest butternuts I've grown, and the squash patch is absolutely filled with them.  I'd guess at least thirty, maybe more.

Don't forget to look at the fall garden in The August Garden (part 1)!