I've been neglecting the garden blogging lately.  After all, this is supposed to be a garden blog, not a house painting blog or a grumpy old Granny telling off the salesman blog.

I may have been neglecting the garden blog, but I haven't been neglecting the garden.  Well, except for my zinnias and marigolds that are in desperate need of deadheading.  Although you can't see them, there are paths throughout the entire garden.  Nice, weed free paths.  In a few spots, the vines have overrun the paths and have been ruthlessly stepped on, being the only way to reach some of the back garden beds.  All of the tomato plants are falling down from their weight, but so far I've only grabbed the shears and cut one of them back to better reach its neighbor, the one with the better tasting fruits.  I wonder how many are rotting on the vines though, as the foliage is too thick and heavy to see through.  I have to do some weird contortions when I go on my tomato hunt each day, most of which require me to view the plants from an upside down position.  The corn is done.  Many of the stalks have been cut down and removed, some have been cut back and will be removed once the squash vines are finished with them, and the final planting will be removed as soon as I get time to do it.  I picked the last half dozen ears last night, and had to toss them all away.  Worms and insects had fed too well on them, there wasn't enough left for us to eat.

It was actually cold enough in the garden this morning that I had to wear a heavy sweater.  Just for you, my dear readers, for the following photos I braved the cold, dewy morning in my pajamas and slippers. 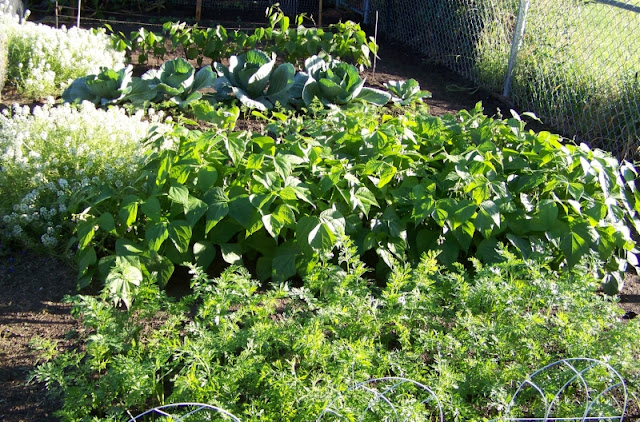 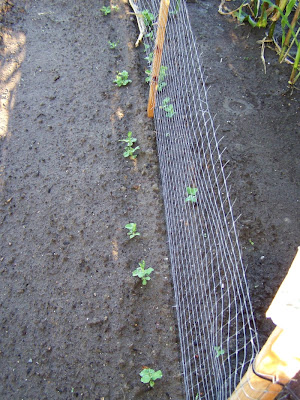 The fall peas didn't germinate well.  I'm undecided whether to leave them like this or to get into my stash of "good" peas and fill in the gaps. 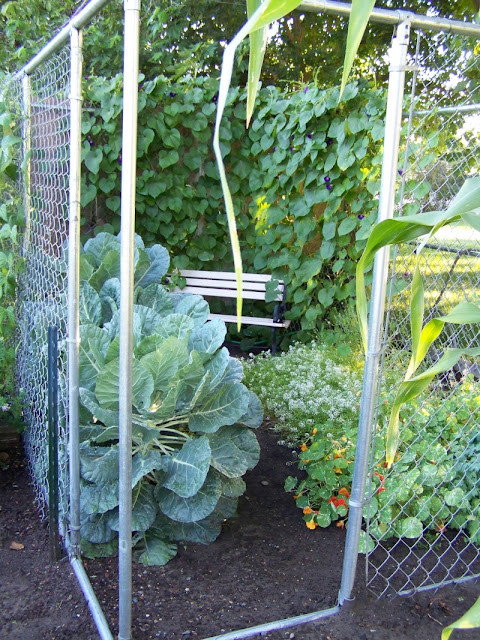 The kennel jungle garden.  It's a lovely, shady spot to sit on a hot day.  Just look at the size of those Brussels sprouts!  It's still iffy whether they will ever grow any sprouts, but that tallest one is nearly 4' high.  It was still too early in the morning when I took this photo, but Grandpa Ott morning glory, back behind the garden bench, bursts forth in glorious bloom as the sunshine makes an appearance. 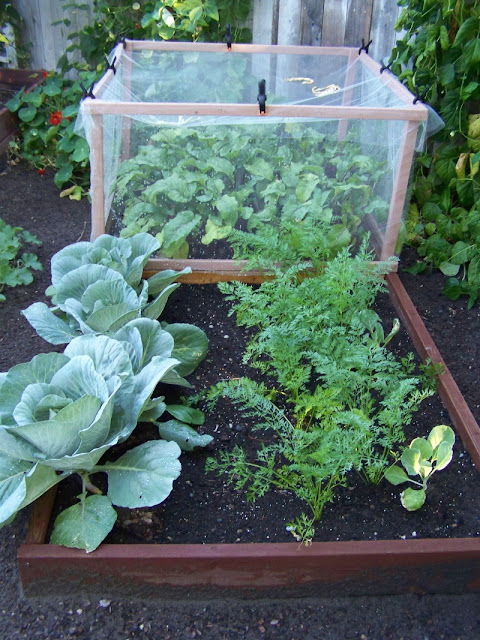 I think I'm going to have a cabbage surplus this fall.  It's a good thing Mr. Granny and two of my kids like sauerkraut!  All of the cabbages are the miniature Gonzales variety, so the heads will be softball sized.  I need to get the beets out of the covered bed, and get my fall spinach planted there. 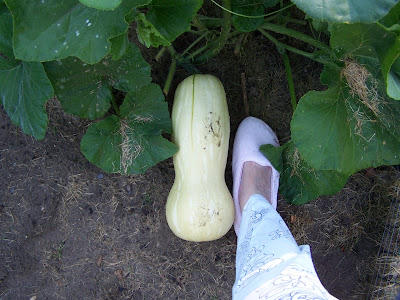 There are a lot of nice sized butternut squash left out there.  It will be a while before this one is ready to harvest, but I noticed quite a few that can be picked any time now. 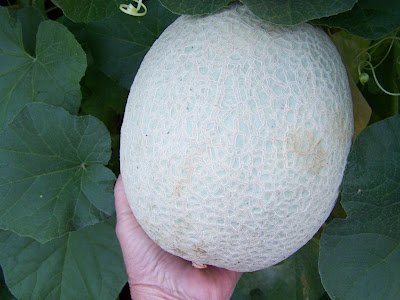 Some of the cantaloupes are huge!  The three melons that are growing up the ladder support are all big and heavy, much more so than those growing on the ground. 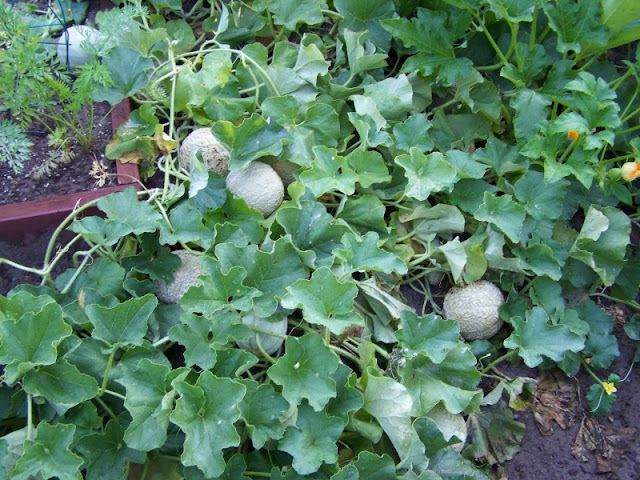 Those on the ground may not be as large, but they are numerous.  What does one do with an over abundance of cantaloupe?  I guess I'll have to freeze them and learn to like melon smoothies. 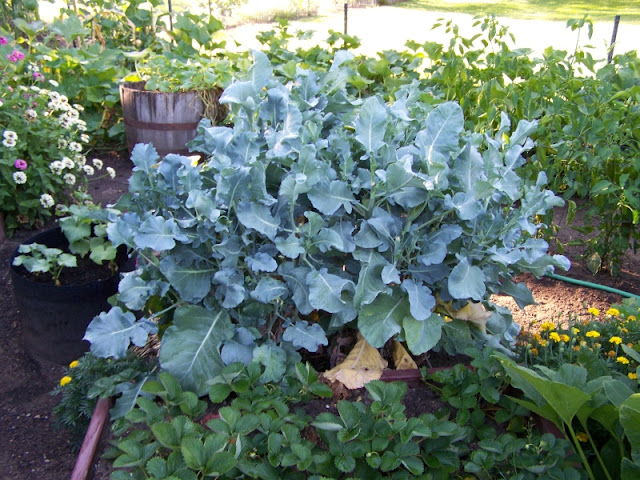 Yes, I'm still getting lots of broccoli from the spring plants.  It looks like they'll bear right into winter for me.  This giant is 4' across.  It's also the plant that "died" last spring.  It was tiny and wilted, and looked as though the stem had rotted.  I buried the stem under the soil, and before long the plant survived and grew.  And grew, and grew. 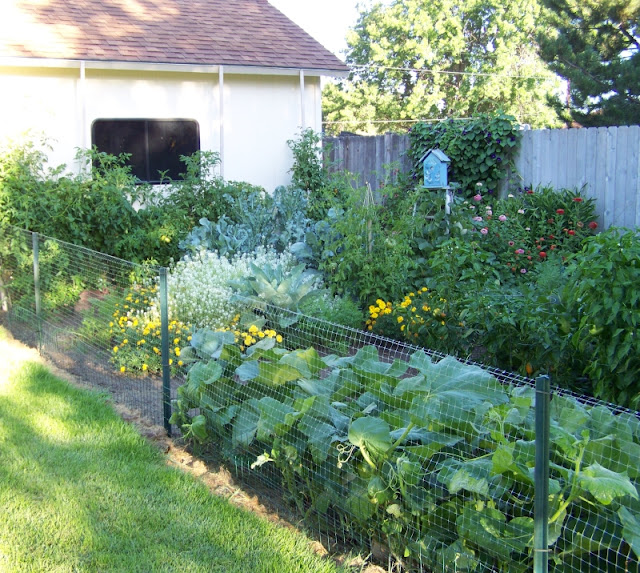 The garden doesn't look much different than it did a month ago, except for the fallen down tomato plants that were once shed roof height. 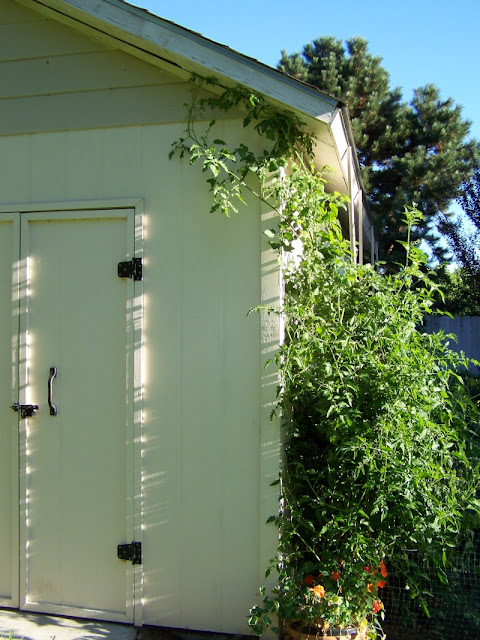 One last photo, for 5olly.  Most of this Black Cherry tomato has fallen over the side of its cage, but some branches are reaching for the rooftop.  I'm not going to drag out the ladder to pick cherry tomatoes, so it's going to get lopped off to a reachable height.

Now I have tomatoes to can and a house to paint.