I'm sitting in my car in front of the library, picking up a pitifully low WIFI signal. I hope it's enough to upload my recent photos. It's fun sitting here trying to type, with the steering wheel as my "desk"!

I pre-wrote my blog before I left the house, but there are a few things I'd like to address before I copy it here. First, I want to thank Stefaneener for the wonderful present I received in today's mail! My goodness, girl...you are too generous. I was on my way to the library and stopped by the PO to pick up the package, and I had to turn around and go right back to the house to see what was in that huge box. Imagine how surprised I was to see a Presto pressure canner! By golly, next year I'll have canned green beans and spaghetti sauce! We can't hardly wait to taste the blackberry jam....and the HONEY! Now, I did find a small container of seeds, and a packet of seeds. Mystery seeds. I had to guess one was radishes and one was broccoli. Was I close at all? Anyway, thank you dear Stefaneener, I love you.

Thomas! I see the seed mats worked for you! I'm so happy, and those radishes look great.

I won't have enough battery time left to answer my blog comments, but I will be going to my daughter's house soon, where I can hopefully catch up. Now....let's see if I can get all the photos in here! 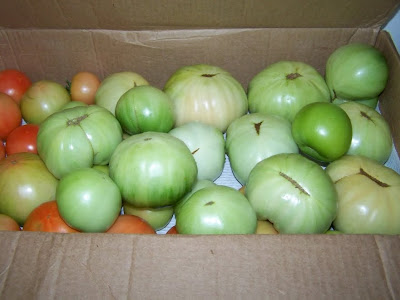 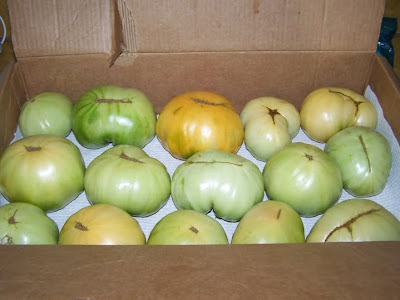 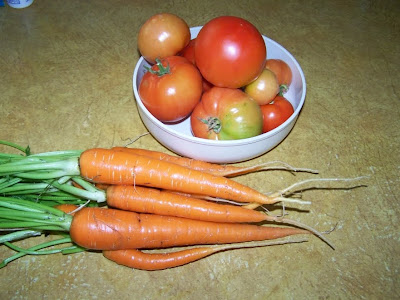 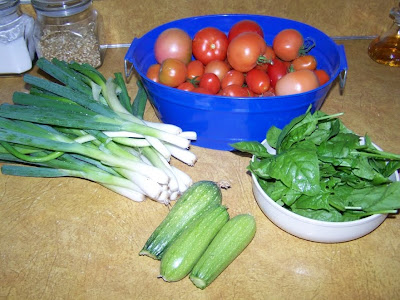 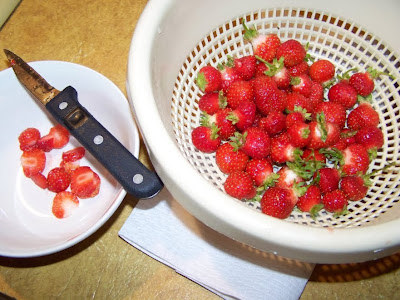 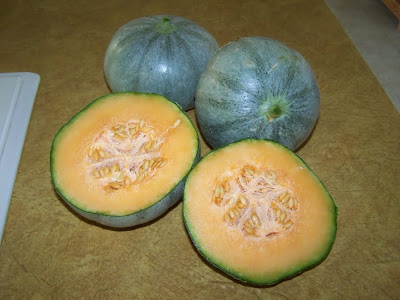 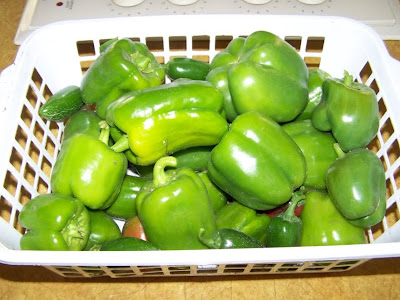 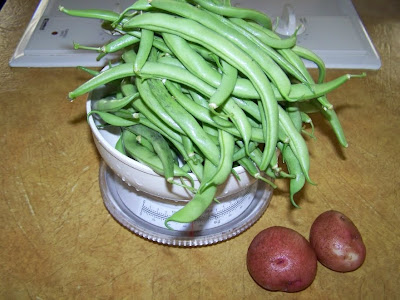 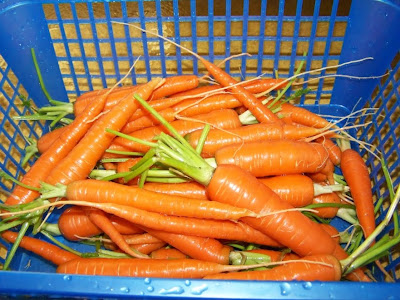 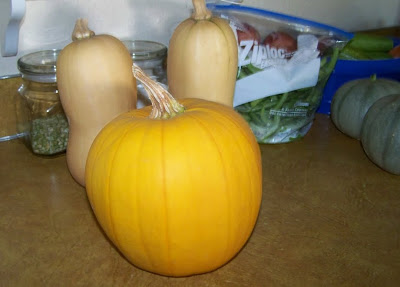 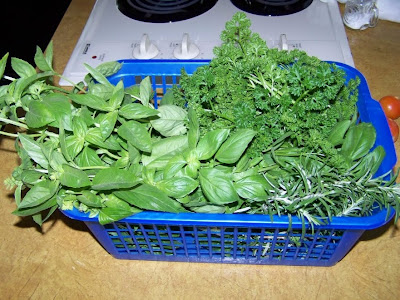 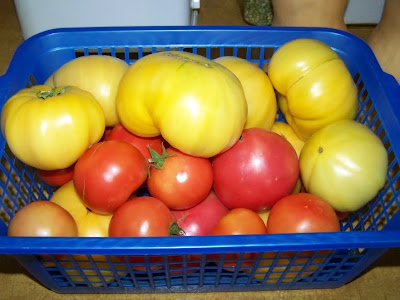 By yesterday, all these formerly green tomatoes had ripened. 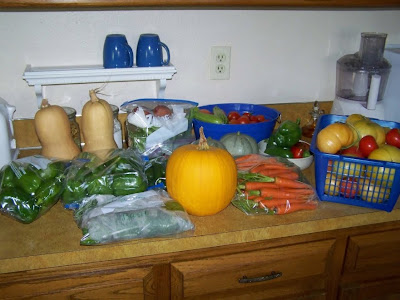 My two day harvest, minus some berries, a melon and what I gave to the neighbor, filled my kitchen counter. 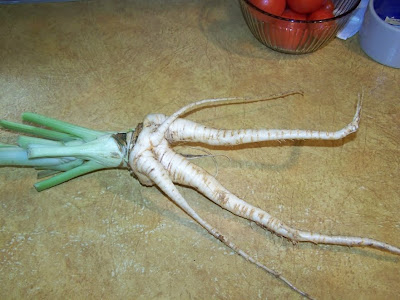 I haven't dug the parsnips yet, except for this ugly thing that had gone to seed. It was so woody, I tossed it in the compost and didn't count it toward my harvest totals. 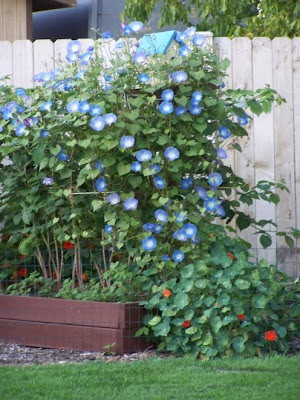 I had to get one last photo of the morning glories before they freeze. My, we have certainly enjoyed them.

Have you ever seen a Granny go through internet withdrawals? It's not a pretty sight. Really....I've cleaned the entire house, the laundry is done, I've done most of the packing for the trip to AZ, and most of the garden has been harvested and cleaned up for next year. I've driven to all the known hotspots in the area, and none that worked for me last year are available any more. I blogged from my daughter's computer last week, but I'm not going to drive the 30 mile round trip every day!

We were supposed to get a hard freeze last night, so I spent the day in the garden, picking/pulling most of the remaining crops. Everything has been harvested now except for the parsnips, and the strawberries, radishes, mesclun and spinach, which are still growing and producing. And the tomatoes. I've picked a lot of lightly colored green tomatoes, and they are ripening quickly indoors. I would guess there are way over a hundred pounds of green tomatoes still on the vines, but I can't even talk anyone into taking them any more! I've tomatoed all my friends and family to death, and I'm getting really sick of them. I'll bet I wish I had them in the middle of the winter, but for now enough is enough! Well, it didn't even get close to freezing, even though 27F was predicted.

When I began planning my 2009 garden, I was hoping I could harvest 500 pounds. It didn't take long to reach that goal, so I set a new goal of 1000 pounds. I was quite sure that was way beyond what my small garden could produce, but I not only reached that goal, I exceeded it! Here's my total harvest, to date, for 2009 (totals have been rounded to the nearest whole pound, crops that are still producing are in parentheses).


Beans, bush - 25 pounds *I need to space the plantings out more in 2010. We had too many all at once.
Beans, pole - 18 pounds *Early on, these were very good, but they kind of went into retirement when the weather got hot., Will try planting in a different area of the garden in 2010.
Beets - 26 pounds *Perfect amount of tasty beets for fresh eating and pickles. Repeat in 2010.
Broccoli - 3/4 pound *The two heads I ended up with were delicious. Try harder for bigger crop in 2010.
Cabbage - 9 pounds *Golden Acre: Sweet, firm heads, perfect size. Plant more in 2010.
Carrots - 19 pounds *All varieties were good except Rainbow Blend. Plant more in 2020, try some sweeter varieties like Mokum and Sugar Snax.
Cauliflower - 3/4 pound *A total failure. Do not plant in 2010.
Cucumbers - 102 pounds *Planted three small (2-gallon size) containers of Spacemaster and had all we could use fresh and more than enough for pickles. Repeat in 2010.
Garlic - 2 pounds *Good return for what was planted, but really didn't use much. Will not plant for 2010.
Herbs - 3 pounds *More than we needed, but will plant about the same amount in 2010.
Lettuce/mesclun - (14 pounds) *Didn't plant nearly enough lettuce, spring or fall. Plant much more in 2010. Prizehead, buttercrunch, red and green Romaine were the best performers.
Melons - 18 pounds *Some of these were delicious, others (Hale's best) not so good. We get excellent local melons very cheap, so will not plant in 2010.
Onions - 16 pounds *These weren't the best onions, purchases as sets from Wal-Mart. For 2010, buy plants of Walla Walla sweets.
Parsnips - (1.4375 pounds) *The two I've eaten were delicious. The remaining ones won't be dug for another week, and I'm guessing I'll end up with another 8-10 pounds.
Peas, shelling - 1/2 pound *A total failure. Set back when birds decapitated them, they never did recuperate. Maybe I'll try again in 2010, maybe not.
Peas, sugar snap - 3 pounds *These didn't perform real well, as they also got nipped by birds, but they were in an otherwise unusable area of the garden, so worth growing again in 2010.
Peppers, hot - 10 pounds *All the jalapenos turned out to be very sweet. Only the one in a pot was hot. Plant two pots of hot peppers 2010, but keep them in a dry area of the garden/yard.
Peppers, sweet - 87 pounds *One of the big successes, definitely repeat in 2010.
Potatoes - 36 pounds *A great yield for only 12 square feet. Plant twice as many in 2010
Pumpkins - 95 pounds *Another success, but took up too much garden space. Will not plant in 2010
Radishes - (1/2 pound) *Why do I always fail at radishes?
Raspberries - 1/2 pound *2010 will be the first year for a crop.
Shallots - 4 pounds *Another success, as I started with so few in a 4 square foot area. Saved some to plant in 2009 for a 2010 crop.
Spinach - (6 pounds) *Good year for spinach, but didn't plant enough for the fall crop. Plant more in fall of 2010.
Squash, crookneck - 37 pounds *These were good/prolific, we got sick of them midway through the season. They also took up a lot of room and suffered from powdery mildew. Iffy about planting in 2010
Squash, butternut - 32 pounds *Another successful crop, Worth the space they took, will plant in 2010.
Squash, zucchini - 22 pounds *Not sure these were worth the space they took, but I'll probably try again in 2010. Maybe try growing in a bucket, away from sprinklers.
Strawberries - (24 pounds) *Very happy with this first year of strawberry plants. The 20 Tristar plants gave us a steady supply for fresh eating, plus two batches of jam.
Tomatoes - (421 pounds) *I'll NEVER plant this many tomato plants again! Even after losing 8 plants to blight, we had more than we, the family and the neighbors could eat/preserve.