I was wondering what to do with my glut of yellow crookneck squash, when I read Dave's post, over at Our Happy Acres, about what he does with his yellow squash and zucchini.  Dave freezes his and adds them to his smoothies.  He said you can't taste the squash.  I trusted Dave (he has some great recipes), so I cubed a crookneck last night, then froze it in a single layer on a tray.  This morning I added 1/2 cup of the frozen cubes to my fruit smoothie,  Dave was right, I couldn't taste the squash at all!  Hooray, I'll be adding extra nutrition to my morning smoothies, and using up the seemingly unending summer squash harvest! 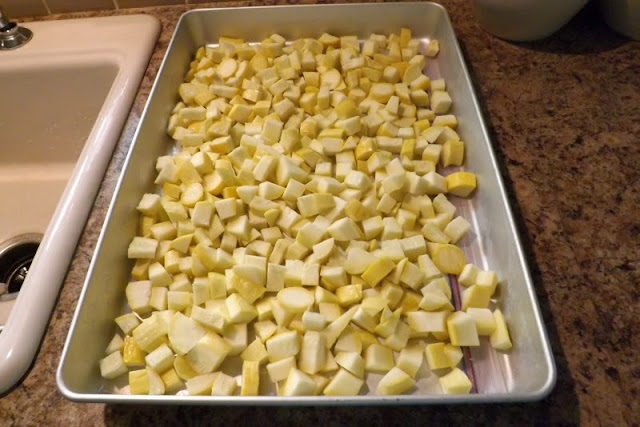 A week's worth of yellow crookneck squash, diced and ready for the freezer.  I didn't even blanch it.  Once it's frozen, I'll transfer it all to a gallon bag, and use it up in smoothies or soups. 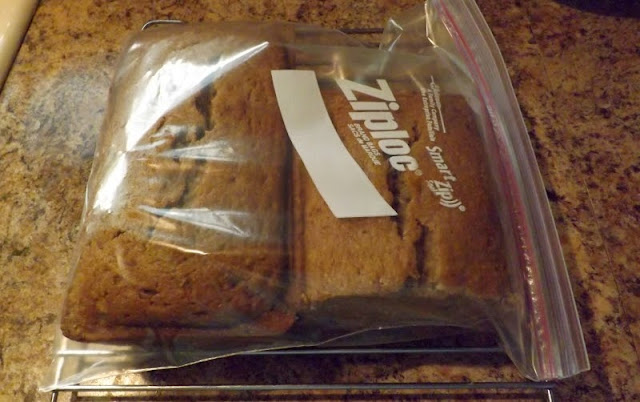 That took care of the excess crooknecks, but I still had a gigantic zucchini to deal with.  Instead of grating the zucchini, I cut out the seed cavity, peeled it, then pureed the firm outer flesh.  It made two loaves of zucchini bread.  The puree made a finer crumb in the bread, almost cake like, but delicious.  Of course, we had to test it out, warm from the oven.  Yes, Sue, I used butter on mine! 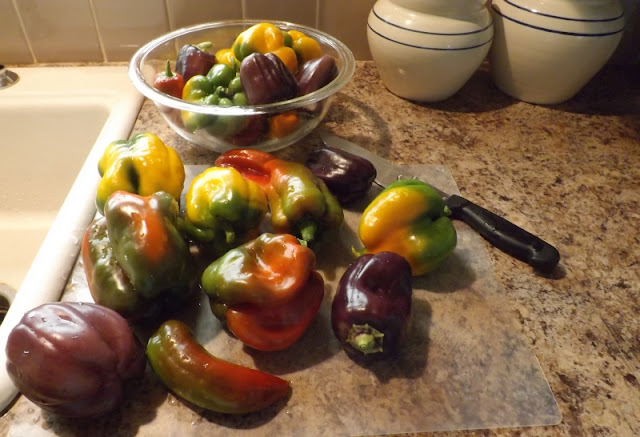 Then there were the peppers to take care of.  This was this morning's harvest of sweet peppers. 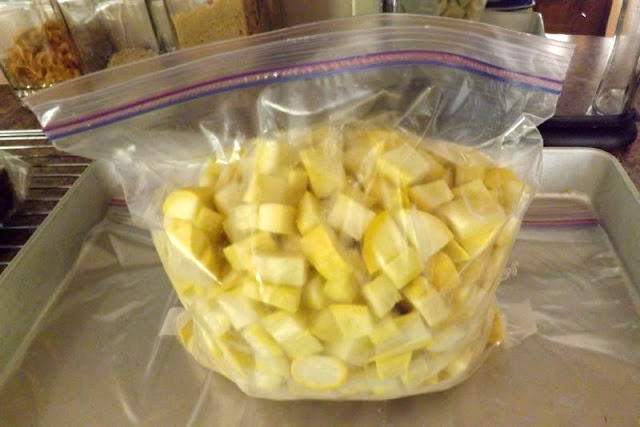 The crookneck cubes, nearly a full gallon, were bagged to free up the big tray for freezing pepper strips. 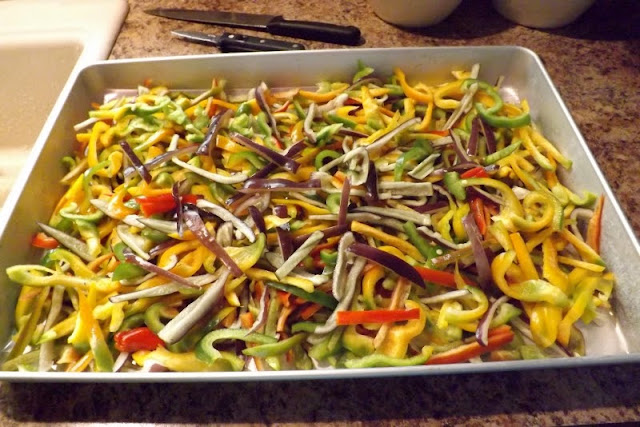 The pretty, colorful mix of peppers will make lots of fajitas for me (Mr. Granny doesn't like fajitas.  Or peppers).  I taste tested the varieties as I prepared them for the freezer.  I wasn't impressed with the flavor of Lavender Bell (or what I assume is Lavender Bell).  It sure is pretty, but it doesn't have the sweetness that the yellow and red peppers have.  The color doesn't go all the way through, either.  The inside is a pale cream color.

I would have had tomatoes to deal with, but the youngest son called and talked me out of a big bag of them.  I had just picked over 12 pounds this morning, so I was happy to share with him.  Since I was making the trip across town, I took the second loaf of zucchini bread for them as well.  Son called a couple of hours later to say he needed more, because it was already all gone!  Sorry, that half loaf will be eaten by us!