As the gardening season begins to wind down, I've taken advantage of the past few cooler days to start my fall garden cleanup.  I'm probably a good month ahead of my usual time for clearing out the garden and readying it for the next year, but the older I get, the more I hate to rush.  I don't have a lot of room for composting the spent plants, so they have to be bagged for pickup on Thursdays.  I filled a lot of bags with squash vines and corn stalks, as well as prunings from cutting back excess foliage from my three remaining tomato plants.  The plants were so lush, I was missing quite a few ripe tomatoes.    I also pulled quite a few marigold plants that had been broken down and flattened during our windstorm last week. 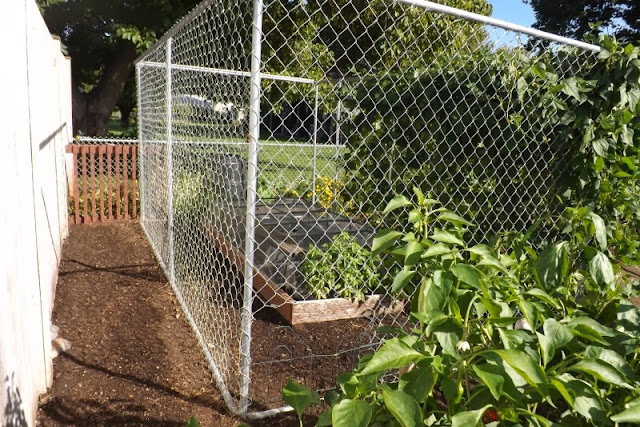 Yesterday I picked the beans from the earliest planted Fortex pole beans (left side of kennel), pulled the vines and cleaned them all off of the chain link.  That was a full day's job! I ended up with 8 pounds of beans, so I called the local Fields of Grace to see if they could use them.  They glean fields and home gardens for the food banks, and they were happy to come by for the beans.  I threw in a few butternuts and sweet peppers as well.  I wish I'd known about their organization earlier!  I have their number for next year.  I left the later planting of Fortex beans, on the right side of the kennel.  They will give us plenty for fresh eating. 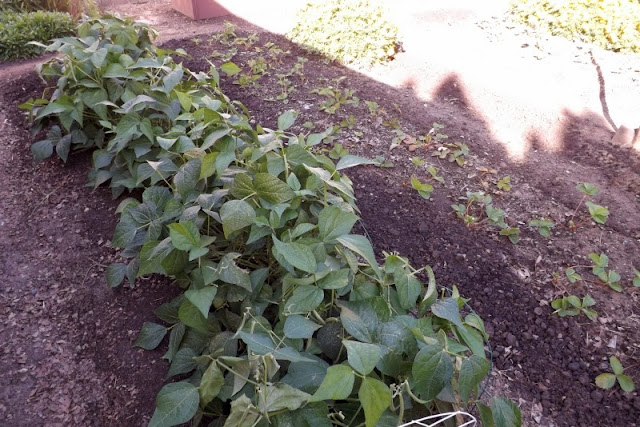 Both beds of transplanted strawberry plants are doing well.  I extended one of the beds by a couple of feet, so I have room for two or three more plants.  Luckily I have a few growing in a pot, so they can be moved out to the garden now.  I also have this one row of Provider bush beans left.  I've decided to always plant just single rows of bush beans in the future, as they are so much easier to pick than the wide rows I usually plant.  The older I get, the more I lean toward "easy". 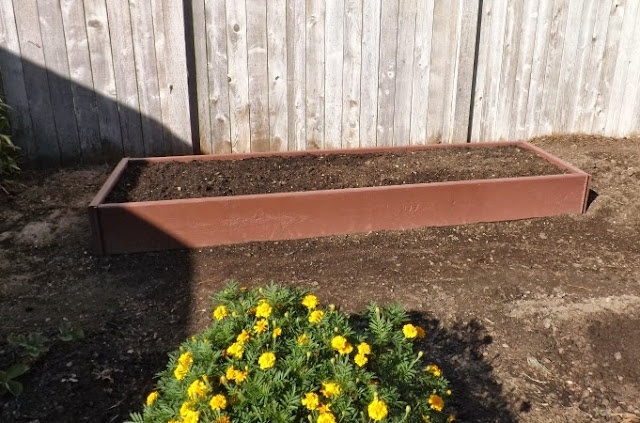 The old boards from the strawberry bed were removed, cut down and rebuilt.  I had planned on planting the raspberries there, but now I've changed my mind.  My tomatoes never get enough sunshine, and the new bed is in the sunniest area of the garden.  I've decided to plant them there next year, as well as in another 8' bed that will be built next to it.  The raspberries can be move behind the shed, where there will still be room to keep them tilled along both sides of the bed.  That means I'll have to pot up the raspberry canes and try to keep them alive until they can be planted, as they'll be going where the fall carrots are now planted.  Or a few fall carrots will have to be sacrificed. 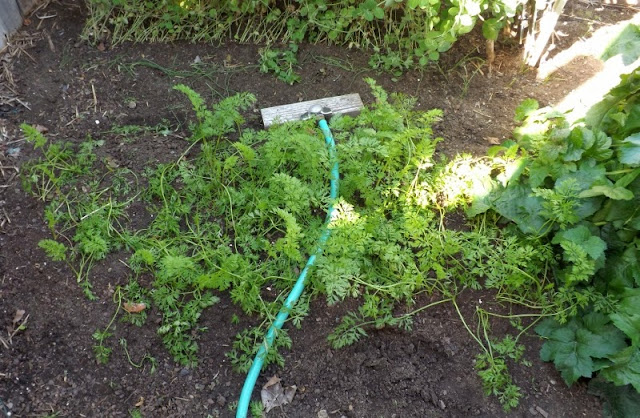 Annie got into the carrot bed yesterday and removed quite a few anyway.  She also stepped all over the tiny onion plants.  She's not a very good garden dog.  Otto behaved himself while roaming the garden....until he pooped.  Dog poop is NOT allowed in the veggie garden, so both dogs got banished and the gate was shut.  I don't know if there is any hope that the snap peas will give me a meal.  So far I've only seen one blossom, and since the wind blew the vines all over,I can't even find that now.  Less than a month to go until our first expected frost. 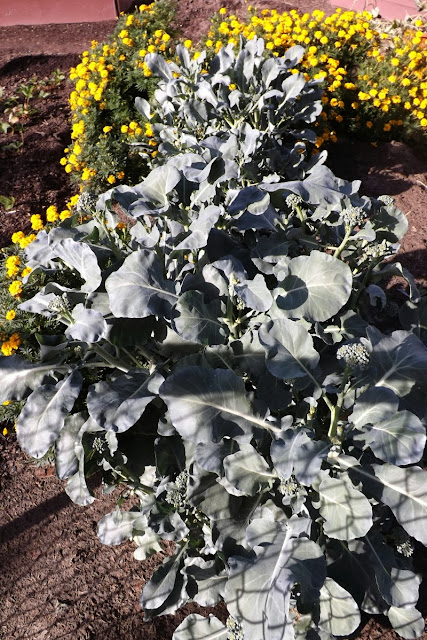 Three of the five broccoli plants were pulled.  They were underperformers, as far as side shoots go, and Mr. Granny cannot be bribed into eating any more broccoli this year.  These remaining two plants will provide more than enough for my dining pleasure. 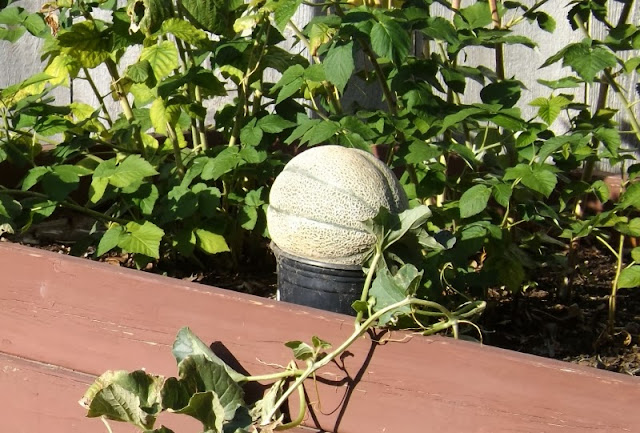 I tried to carefully cut out the extra cantaloupe vines, and not disturb the big almost ripe melon and two smaller green melons that were left.  Of course I snipped the wrong vine.  The one that went to the big melon.  It's still sitting out in the garden, but I have a feeling it will never ripen enough to be eaten (it looks attached, it isn't).  Bah.  Humbug. 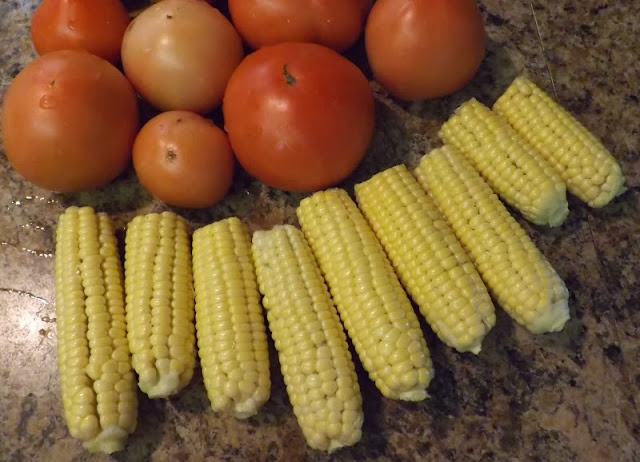 The fall corn has been harvested and the stalks pulled and removed from the garden.  I salvaged what I could of the pitifully small ears, half eaten by ear worms, and it was just enough to make a big pot of fresh corn chowder.  I used the last of my Red Norland potatoes, and several of the leeks that I dug out yesterday.  Too many of the leeks were going to seed, so I decided to dig them all before they were too woody to use. 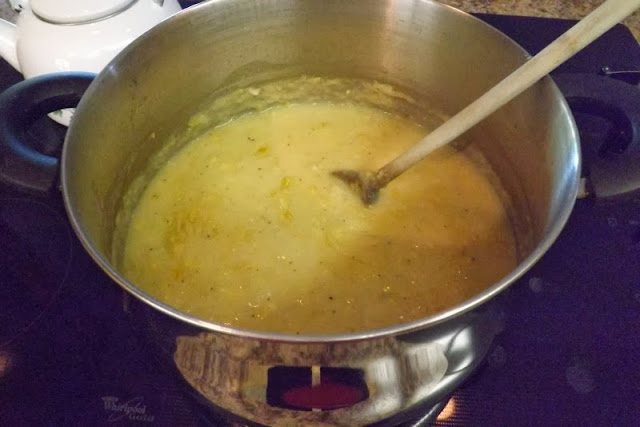 Oh, my, they do make the best tasting soup!  I think I'll slice the remaining leeks and freeze them for future batches of soup. 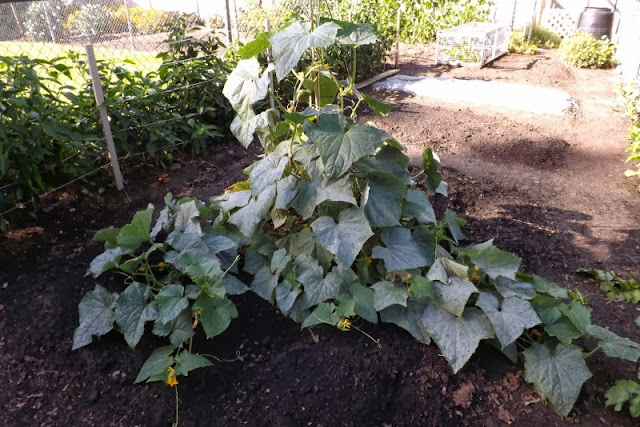 My fall cucumbers were doing so well after I sprayed them with the milk/soda solution, but two cool days of drizzly weather and the powdery mildew returned with a vengeance.  I've sprayed them the past two days, but I don't think there has been any improvement.  I'll keep trying for a bit, because I'm getting some really nice cucumbers from them.

I'll spend the next couple of days dismantling the raspberry bed and rebuilding it (for the tomatoes) in a new location.  I hope I can salvage enough canes to plant a new 12' row.  Speaking of raspberries, these are a one crop, summer bearing variety.  But one plant didn't know that, and it blossomed and is forming berries!  I'll be leaving it alone to see if I actually get ripe fruit from it. 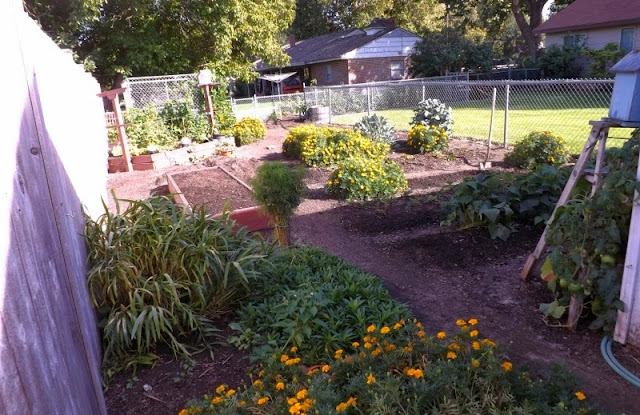 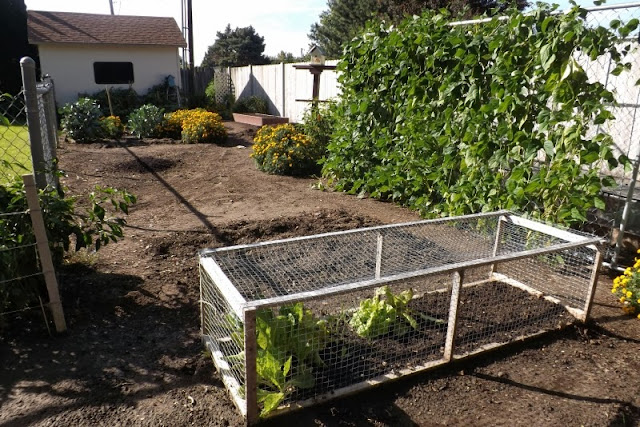 The north garden, looking west.  It looks quite bare with the corn, squash and leeks all removed. 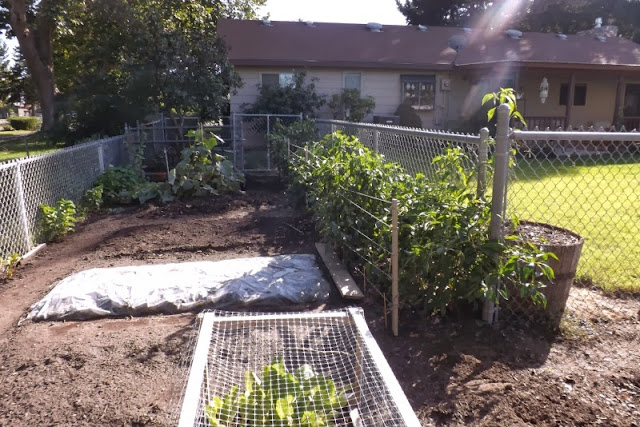 The east garden.  The peppers are still growing and producing.