I had visitors this afternoon! DaBeardedOne and his wife (I cannot bring myself to call her Mrs. DaBeardedOne, as she certainly has no beard!), came for lunch. After we ate, they took a tour of my garden shed and its new light setup, and my garden, which has yet to be cleared of the fall/winter mess. We then had a seed exchange, so I have yet another tomato to try! They are very nice people, and I really enjoyed our visit.

I bought my seed potatoes and onions this afternoon. I'm so lucky to have a local source, as the prices are very affordable. I purchased 2.25 lb. Kennebec (late) seed potatoes, and 2.5 lb. Red Norland (early) seed potatoes for 75-cents a pound, and two bunches (100 plants total) of Walla Walla sweet onions for $1.39 per bunch. Don't tell anyone, but I just had to get myself 10 pkts. of garden seeds that were on sale at 5/$1. Most of them are flowers, but I did buy some Calabrese broccoli to replace my 2008 leftover seed. 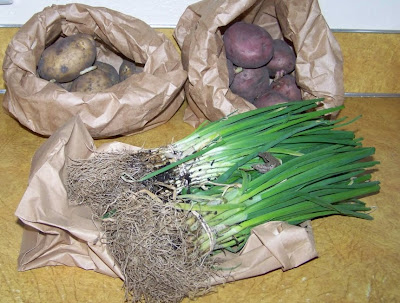 My mini greenhouse is almost ready to be used. I still have to buy a power strip, as I'm going to use a remote to turn the lights off and on from inside the house, so they all have to be plugged into one source. I think I'd also better add a brace at the front of the middle shelf, it looks like it sags a bit. 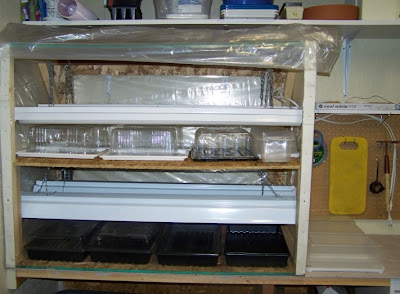 The mini has two 2'x4' shelves, with four double light fixtures. The bottom shelf will hold two heat mats for the tender seeds (tomatoes, peppers, eggplant) and the others will go on the middle shelf, where they will get some residual heat as it rises. I have a 2' double light fixture to mount at the right of the mini, over the plastic containers, and will be growing the cold hardy plants there.

I have my potting mix, and will be making soil blocks and seed mats this week. I have several strips of toilet tissue marked for carrot and lettuce seeds, so I need to get to gluing them. Tomorrow the onions have to be planted, and I don't have the load of compost that will top off the beds. I'll have to "borrow" soil from a neighboring bed, and enrich it with the small amount of home made compost that's left from last year. The onions will be planted rather closely, as I want to pull some for green onions and let the rest of them bulb.

Our weather has turned cold again, but the forecast calls for temperatures in the sixties beginning Sunday. Grandson, Kevin, might be here to help clear the garden next weekend. I hope so, I have two pea patches that need to be readied for planting!