It was cold out this morning, but I had a lot of onions to plant. I donned coat and gloves, and headed for the garden. I still don't have my load of compost, so I had to borrow from bed #1 to bring bed #2 up to level. That worked out fine though, as #1 had to be trenched for the potatoes anyway. I'll just fill it up as the potatoes grow.

I trimmed all the onion plants that I purchased yesterday, cutting a bit off of the roots and the tops, then planted 72 of them in bed #2, which measures 2'x4'. That gave them 3" spacing, which should be fine if I pull every other one for use as spring onions. I still had quite a few onion plants left, so I put another 58 in Bed #4 (another 2'x4' bed) around the pot of cilantro. That was supposed to be where the chives were going, so I guess chives will end up in a pot this year.

Since I had the trenches dug, I decided to go ahead and plant all of the potatoes. Quite a productive day, with a total of 130 onions and 20 hills of potatoes planted.

It still hadn't begun raining, although it was cold and gray, so I cleared out one long pathway in the east garden. There weren't many weeds to hoe out, mostly just raking of leaves and garden litter. I gave today's plantings a good drink of fish fertilizer, but I do hope we get the rain that is forecast, as the gardens are really dry. 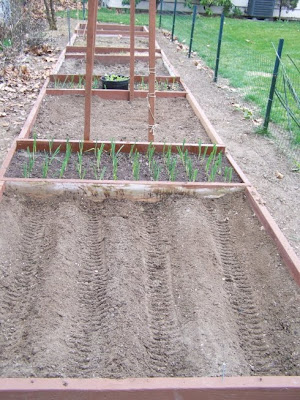 Three of the eight beds in this group have now been planted, with potatoes in bed #1, sweet onions in #2, and more sweet onions and cilantro in #4. The cilantro is suffering from the cold nights we've had this week, I may have to start a new pot.