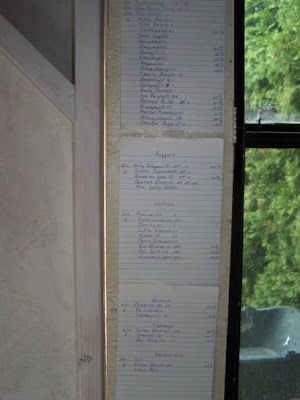 As I enter the garden shed, the germination lists for the veggies and herbs are on the wall. I don't keep track of the flowers here, I'm mainly interested in making sure I have enough tomatoes and peppers growing. 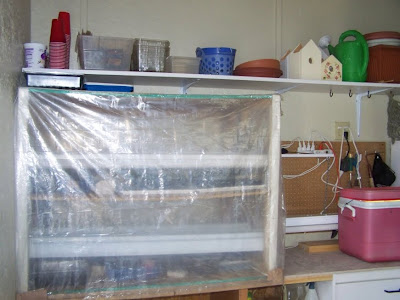 The mini-greenhouse, all tucked inside its plastic curtains. 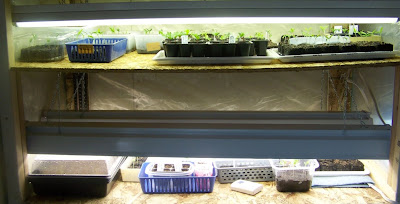 Inside, the shelf is still sagging. I should have had John reinforce it while he was here and in a fixing mood.

Good germination on most of the tomatoes.

Marigolds and Sweet Williams are growing strong and stocky.

Peppers are beginning to get their true leaves. 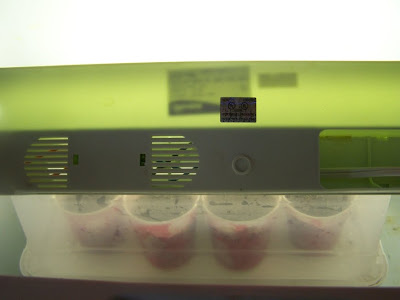 Inside the picnic cooler, some unsprouted seeds bask in warmth. 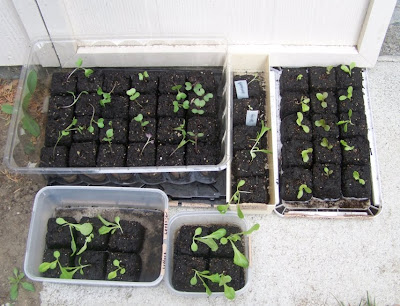 Lettuce, broccoli and cabbages are getting a bit floppy, so I've been putting them outside for a while each day. I always seem to have better luck direct seeding these, I think it's just too warm under the lights in the mini-greenhouse. The smaller, stockier lettuces are being grown under a light on the counter, where it's much cooler. 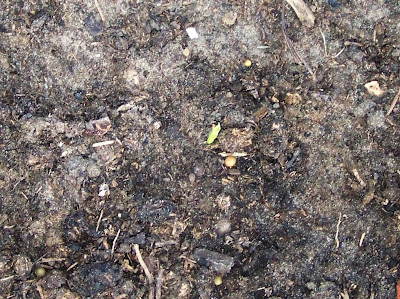 Look closely, right in the middle of the photo. My first pea shoot of 2010!

You'll have to click on this picture to enlarge it, then maybe you can see the spinach that is growing there. I bought "leaf & twig" compost this year, which is much more expensive than the dairy compost I usually buy, and I think they should have composted those twigs a bit longer. It makes really rough seed beds. 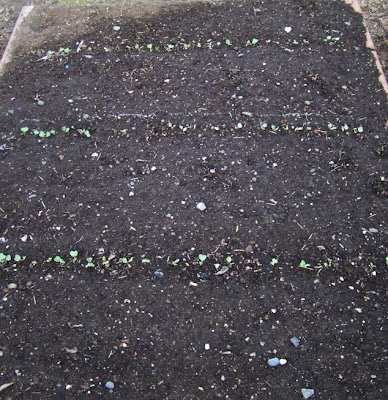 See the three rows of radishes? The lettuce will be planted in between these rows.

The weather has been in the mid fifties, but the wind is cold, cold, cold! Today I planted all the toilet paper seed mats that I had made this week, which were Bulls' Blood and Red Ace beets, Champion, Cherry Belle and Sparkler radishes, Short 'n Sweet, Red Core Chantenay and Ingot carrots.

We still have no irrigation water. Now they say it MIGHT be on by the end of the week. I'm getting too much planted to haul out the sprinkling can full of water every time it's needed, so I broke down and put a nozzle on the hose and hooked it up to the house water. I don't like doing that, as it's chlorinated and expensive to use for gardening, let alone for lawn sprinkling. The grass under our pine trees looks completely dead now. It just can't survive without water.