Finally. After battling cutworms, falling maple trees and just plain bad choice of seed, I actually got a decent picking today. There are only two short, partial rows left of the earlier planted beans, but each plant is now producing more beans in one picking than I was getting from three entire rows of those Burpee "whatevers" I put in this spring. I'm not sure what variety these are, either Contender or Provider. They were old seeds left from my last garden, which was planted four years ago.

I also picked seven lovely tomatoes, one very large and two funny stubby cucumbers, one yellow crookneck squash (but they look to be coming on strong, very soon), three more zucchini (I ignored a couple more that should have been picked, I'm running out of room in the refrigerator), and my usual half-dozen cherry tomatoes. I'm about to give up on those cherry tomatoes. The vines are huge and there are a lot of green tomatoes on them, but they just ripen so very slowly. I sent three of the tomatoes and the large cuke home with my son. He worked pretty hard today, taking down the last of the cedar fence. But I had all of this left for us. 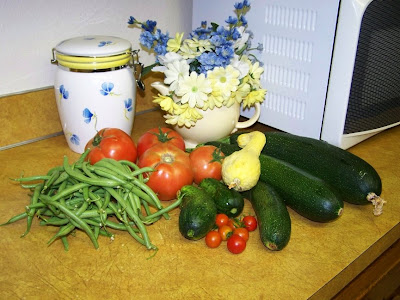 Yes, the fence is gone! Everything has been cleaned up and hauled to the dump, and I can call the fence builders tomorrow.

It has been terribly hot again. We are expecting temperatures back in triple digits this week, so I found a large panel of lattice and set it up on some buckets over the bunny greens garden. A lot of the lettuces are emerging, and I'm afraid the heat will just kill them. Hopefully the white lattice will deflect some of the sunlight and the plants will appreciate a bit of shade.

I noticed one of the beets I planted last month looks as though it has been chewed by a cutworm. I hope the others don't suffer the same fate. Cutworms were a problem in the bean patch earlier, a common problem in a new garden where there was formerly sod. Other than that, everything in the garden is growing well and looking healthy. Those green onions I bought at the grocery store and planted last week are beginning to show new green tops, the latest planting of beets are emerging, and the little carrots are beginning to show their feathery true leaves. We still have 70-80 days of growing weather, so hopefully I'll get a harvest from this late planted garden.