This is my second post for this date. Please scroll down for the main blog for today. 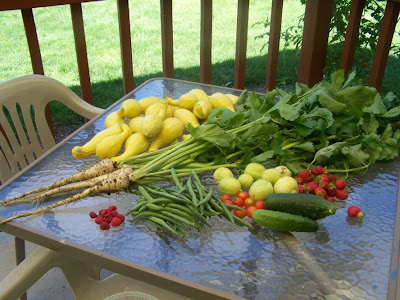 After I picked the yellow crookneck squash, I ventured back out into the heat (93.9 in the shade) to harvest more from the garden. I picked the first Lemon Cucumbers, the seeds of which were a gift from Cheryl's Garden Goodies, and only two cucumbers total from the three Spacemaster plants. There was a rather small crop of strawberries, but lots of green berries and blossoms, so there are many more to come. The raspberries are finished for the season, the few I picked will be eaten right away and not even weighed. There were just enough cherry tomatoes for Mr. H's dinner salad, and yet another picking of green beans to add to the ones that are still waiting in the refrigerator. I either need to get them cooked or frozen.

I know the parsnips are not supposed to be pulled until after the first frost, but curiosity got the best of me. They are certainly large enough to eat, but I don't know how sweet they'll be with an early harvest.

Once everything is washed, trimmed and weighed, I'll be adding some poundage to my 2009 harvest total.