We're having a few cooler days right now, so I'm trying to get as much outside work done as I possibly can before it gets back up into the 90s again, later this week. I went out at six this morning and prepped the north wall in the new garden shed for painting, painted the back door trim, then painted the wall. It might seem as though this painting is going quite slowly, but the walls are made of recycled OSB, and they are quite rough. They have to be primed, and all the larger gouges and nail holes filled. Even the seams have to be filled, as the pieces don't always fit as tightly together as one might want. Then I paint everything with a brush rather than a roller, so I can work the paint into the rough surface. I'm using a good exterior satin house paint on the inside walls, as I know it will hold up well under moist, unheated conditions. It's hard work, but I think it's worth it. 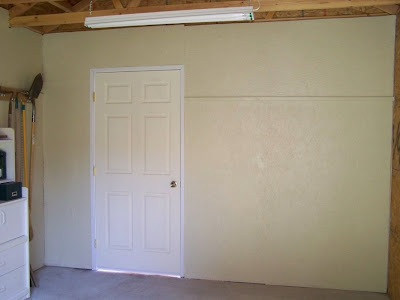 There is still so much left to do! I have to prep and paint the east wall, install quarter-round in the corners, install shelving, install hooks to hang garden tools, install a threshold under the back door, install weather stripping around all the doors. I doubt we'll even try to put in a ceiling this year, that can wait until next spring. It looks so large when it's empty! Soon this corner will hold a big dump cart, a riding mower, a rototiller, a push mower.....it won't leave a lot of room for me!

With the wall finished, I dragged out my old step stool and gave it a coat of fresh paint. I can't put a beat up old paint splattered step stool in a nice new garden shed! 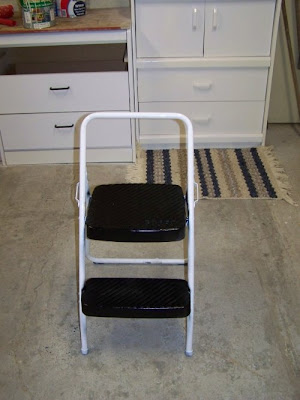 I started to pick the Contender bush beans today, but only found a handful. I decided they have outlived their usefulness, so I pulled them out and composted them. I'll transplant lettuce into that area once the plants get large enough to move. That's two varieties of bush beans gone, and one to go. I'll probably plant another row somewhere so I can continue to complain about picking those darned beans!

The nasturtiums are overtaking the gardens. I pulled out a few, and trimmed some others back, but they need some serious thinning out.

The dill got a few branches broken in the windstorm the other day, so I clipped them off and hung them to dry. 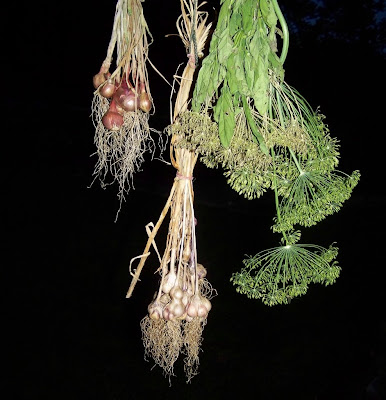 The parsnips took quite a beating, too. I'll be corralling them, like I did the potatoes, with 3 or 4-foot long 1"x2" stakes and heavy garden twine. They must remain upright for about another 3-1/2 months! They are getting absolutely huge, the tops being at least three feet high. I dug around a couple of them to check the root size, and those are getting big, too.

The peppers are looking terrific, and growing like weeds! 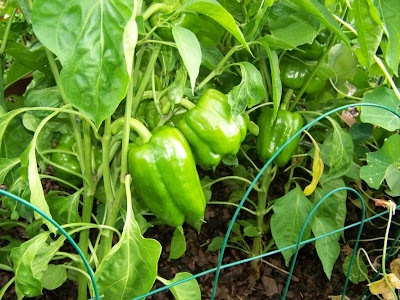 I can freeze the bells, 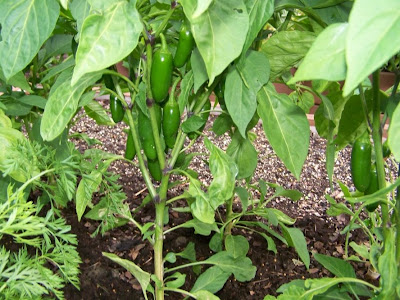 ....but what on earth am I going to do with all the jalapenos? 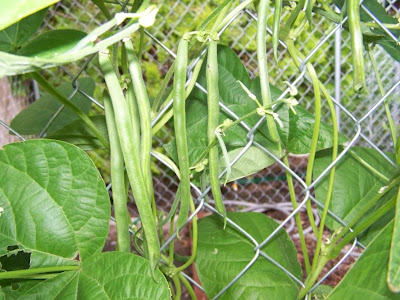 Of coarse, the pole beans are almost ready to be picked again! 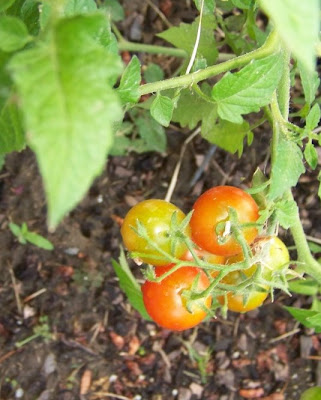 Do you see what I see? This is one of the Tumbling Tom cherry tomatoes I started in Arizona last February, carried all the way back to Washington and continued to let it grow in the laundry room. It had blossoms on it months ago, but they never bore any fruit. Its "big sister", twice its size, still has no ripe tomatoes. Once these ripen, I won't be weighing them, I'll be eating them before they reach the kitchen!
Son Scott came to pick up Grandson Kevin, who had spent two nights with us, so I coerced him into mowing the back yard for me. I wanted the clippings bagged to use as mulch in the garden, so he mowed and I spread the clippings. The pea vines that I removed the other day, and the beans and nasturtiums from today were mowed, bagged and added to the compost heap.

I've never been able to get my entire garden in one picture. well, duh...I have a "panorama" setting on my camera that I'd never even tried! It still doesn't include the small west garden, but here is the main garden in its entirety. Click to enlarge.

The rest of the afternoon was spent grocery shopping. I store-hopped for specials today, so it was rather time consuming and I got back home just in time to cook dinner. We had a nice "garden dinner", but no pictures. I was so tired, I just dished up Mr. H's plate from the stove, and took mine to the computer on a paper plate!

I know some people are grossed out when I tell them our two dogs sleep with us. Well, they are bathed regularly (they probably smell better than I do!), we love them dearly, and they are spoiled as badly as we spoiled our children. Besides, sometimes their sleeping expressions are just priceless. 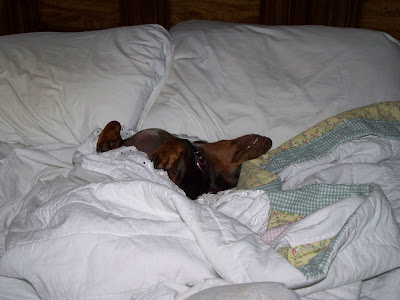