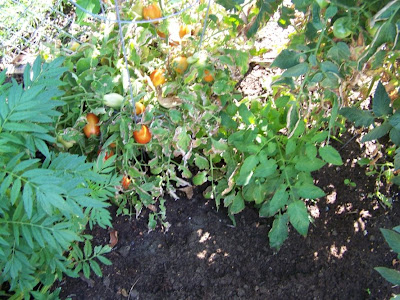 In my earlier post, I mentioned the Chico III (Roma) tomatoes being hit by blight (probably Verticillium Wilt). If you click the above picture to enlarge it, you can better see just how bad it is. Notice the healthy shoot coming out of the right side of the plant. The Celebrity on the right of the Roma was also showing signs of disease on the bottom stems. 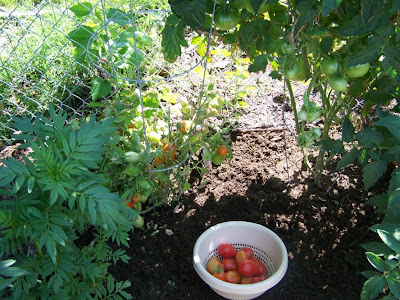 I picked off every tomato that was ripe or nearly ripe, and tried to prune off the worst of the diseased branches on both plants. *Important: dip the pruning shears in a solution of one part bleach to one part water after each cut.* The Celebrity is looking pretty good, but I think the Roma is beyond hope. Wouldn't you know, I accidentally lopped off its only healthy branch. 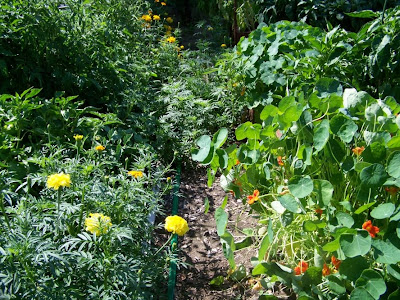 Since I was in a pruning mood, I decided to also tackle this pathway. It was impossible to get from one end of the garden to the other without backtracking all the way around the other side. 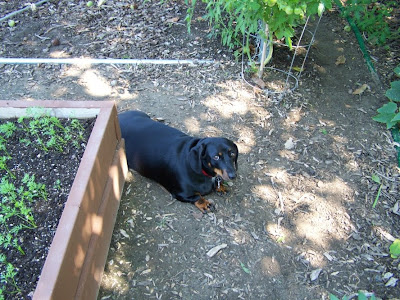 Annie was smart enough to relax in the shade while I labored in the 104 degree weather. 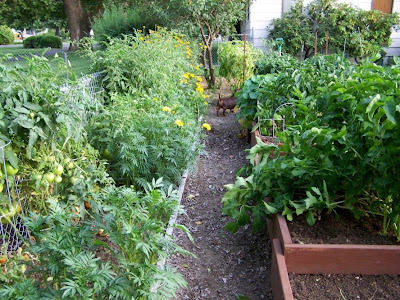 When I finished, there were fewer marigolds and no nasturtiums. The parsnips were still a bit floppy and will have to be dealt with later. Otto was the first one to try out the newly cleared pathway. 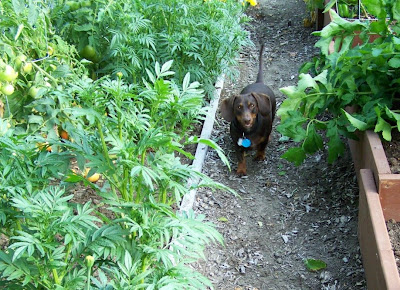 There's just so much cuteness there, I had to get him coming and going.

A few minutes after I took this photo, I heard Otto behind me, making a weird sound. I turned and saw him writhing on the ground, as though he were having convulsions. I grabbed him and noticed he was very frightened, and couldn't close his mouth. I reached way inside and pulled out a 2" long stick he had gotten stuck sideways at the back of his mouth. It just goes to show you, they aren't always safe, even in their own yards. I shudder to think what would have happened to him if I hadn't been there to help him. Needless to say, he got lots of hugs and loves after his ordeal. Our little dogs are very precious to us. 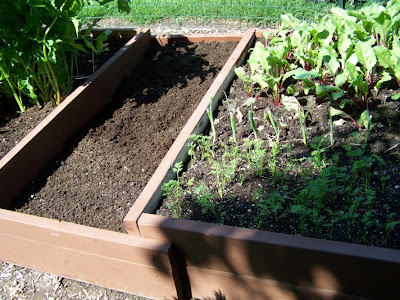 Pulling out the nasturtiums left me with a nice 2' x 4' planting bed. Now I must decide what fall crop I want to put there. 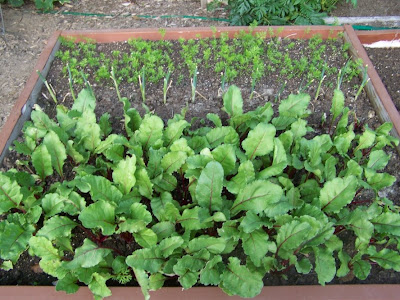 This is the bed I planted just 30 days ago. Fiona of Rowangarth Farm was curious about how I glued my carrot seed to paper and planted the paper mats in my garden. These carrots were glued onto cheap paper napkins by placing a dot of water soluble glue every couple of inches in each direction, then dropping a single carrot seed into the glue. I let the seed mats dry, then placed four of them side by side in the dampened garden box. I mixed up some garden soil with a bit of vermiculite and covered the seed mats to a depth of about 1/4 inch, then tamped them down with the back of a rake. I then covered them with boards for a few days, until the first ones began sprouting. The boards kept the seeds from drying out in the hot, windy weather. Once the boards were removed, I gave them a gentle spray of water twice a day, morning and mid-afternoon. As you can see, germination was quite good. I did go back the other day and fill in a few bare spots, probably fewer than another 25 seeds. The beets in the front of the bed were sown at the same time. They have been thinned, and the thinnings either transplanted into another row or fed to our rabbit. The transplants wilted down right away, but in a couple of days began to grow new leaves, so it looks as though transplanting in summer heat can be successful. I put a row of grocery store green onions between the carrots and beets, to give us some nice sized onions next fall. 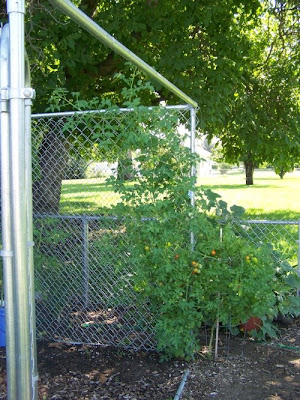 Remember the Tumbling Tom tomatoes I started in Arizona last February, brought to Washington in a picnic cooler, and raised in my laundry room window? Well, I don't think they are Tumbling Toms. They don't tumble.....in fact, this one is over 7 feet tall now, and it has at least two feet of stem buried underground! The tomatoes still have very little flavor, and the skins are really tough. Unfortunately, even after all the loving care I've given it, it's a loser. 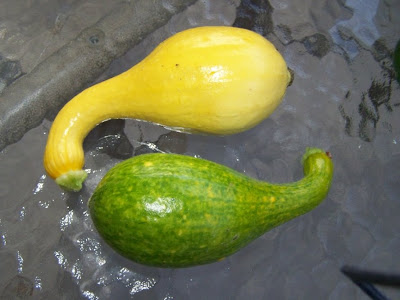 What happened here? I've never had a Yellow Crookneck Summer Squash cross with another variety. It's planted next to the Waltham Butternut Winter Squash. Do you suppose there was some hanky-panky going on in that bed?

"We eat, therefor we garden"